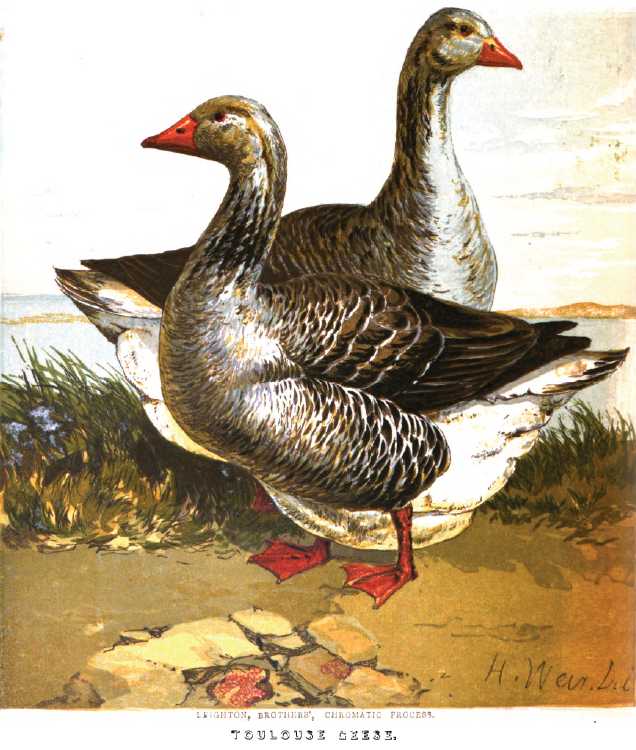 Toulouse Geese belonging to Captain Hornby, RN Painted by Harrison Weir, from The Poultry Book of 1853

We now come to the Toulouse Goose, some of the earliest birds of which breed were imported by the late Earl of Derby from the south of France,—Marseilles, if we remember right.

Like the Embden variety, they attain great size, and by the continuous retention of certain fixed colours in their plumage, with some other peculiarities, they would seem to be equally entitled to the separate position of a “sub-variety.”

The following is a description of a gander and goose of this breed, which came into our possession from the Knowsley stock :—

The orbit, in both its form and colour, the general tone of plumage, the colour of the bill and legs, the particular light marking of the lesser wing-coverts, and the wings, which fall short of the tail, are points of resemblance between the Toulouse and the Gray-lag Geese.

The Toulouse is distinguished from the dark gray variety of the common Goose, which it frequently resembles, not only by its greater size, but also by its colours being darker and more intense; by the bright orange hue of the bill, legs, and the orbit around the eye, as also by the singularly early development of the abdominal pouch.

The orbit itself is also much larger, and the head more depressed. The last characteristic, the unusual proportions of the abdominal pouch, is abundantly displayed in the same excess as is sometimes seen in the dewlap of high-bred short-horn cattle; and this occurs at a short period after they have emerged from the shell.

Our own goslings have thus begun to assume this ordinary feature of mature birds when not ten days old; and at three months it will be seen almost touching the ground.

The weight attained by these birds is enormous; and in a favourable locality, and under good management, must insure an admirable return for food consumed, and the other expenses of their keep. To these merits the Messrs. Baker add another recommendation, in the fact that “even when fed to the greatest weights, they never become disgustingly fat, as too often happens with the common Goose.”