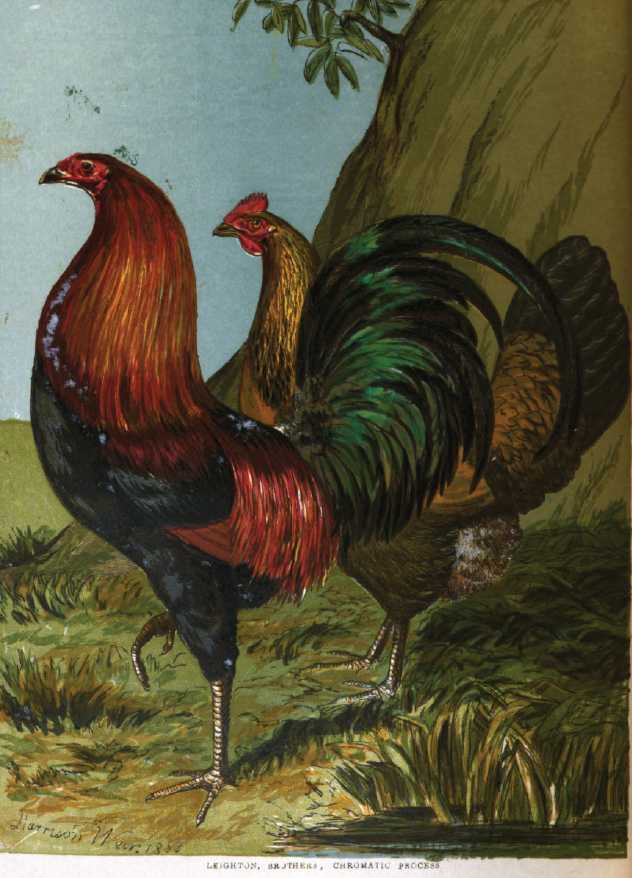 Another of Captain Hornby’s birds. Sadly one of the main reasons for breeding these beautiful English game fowl had been cock fighting. This was not legal in England and Wales at the time the book was written having been banned in 1835 but was legal in Scotland until 1895 where it was a respectable ‘sport’ supported by the gentry.

Those who opposed it were viewed as being somewhat mad by many. Happily, the opposite now applies and this animal cruelty is rare although an RSPCA report in 2007 said it still goes on in secret.

Our present task is with the English Game fowl. He is, we affirm, essentially an English bird; for the specimens which we have seen in other countries, or which have been imported thence, always appeared to us to have been of second-rate merit; and such we apprehend is the general opinion of all competent judges.

In this country he has long held a post of high honour, and in some instances pedi­grees and stud-books, running back over a period of 60 and 100 years, testify to his unstained descent from birds of note and fame in other places than the poultry-yard.

The jealousy and vigilance with which the most successful strains were then watched; the reported secrets of the feeders; and the general favour with which, in days gone by, their ardent temperament and high courage were regarded, have all contributed to confer a degree of interest upon this family of fowls which has probably been shared by none besides.

Not only, however, have they been very generally kept for those purposes to which their pugnacity has destined them, but many farmers and cottagers have long regarded them with a favourable eye merely as poultry.

In this character they are now before us; and here also our thanks should be expressed to Mr. Andrews of Dorchester, Mr. Hinxman, Mr. Thurwall of Royston, Mr. Wilson of Redditch, and Mr. Roscoe of Knowsley, as well as to others to whom we are indebted for communications of great value.

Saddest and most telling is this short paragraph from the section on the ideal conformation of the English game fowl.

The spur should be placed low on the leg, its power as a weapon being thereby greatly increased; but the force of the blow is aided by a rapid driving stroke of the wing.