History of the Turkey in Britain 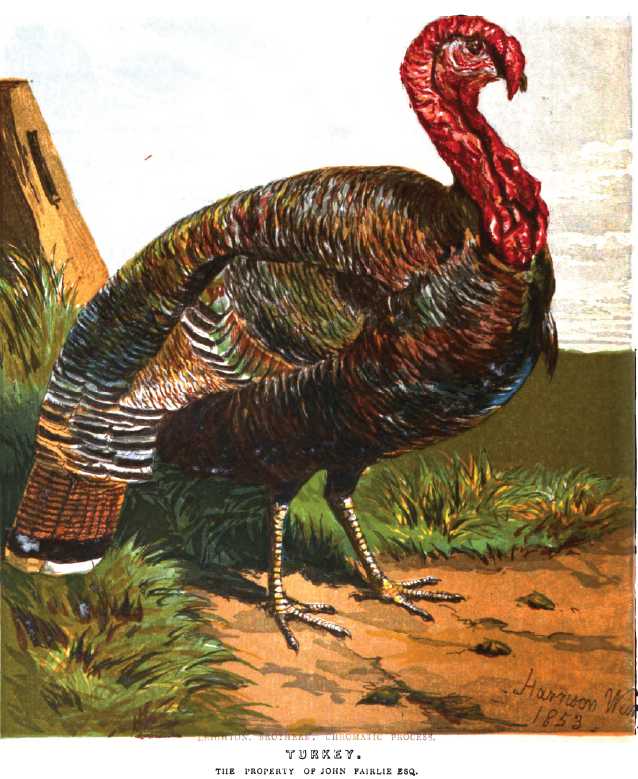 A Turkey belonging to John Fairleigh, Esq. Painted by Harrison Weir for the 1853 Poultry Book

Nowadays we tend to just think of turkey’s as just the Christmas dinner and Easter treat (OK, Thanksgiving for our American visitors but we don’t have that holiday in Britain)

Back in the 1850s they were bred in much the same way, although on a lesser scale, as chickens to show by fanciers. They had been Christmas fare since the late 1500’s but goose was more popular and common. The turkey became the most popular Christmas dish after Queen Victoria and the Royal Family had turkey one year and set the fashion.

History of the Turkey

There is no reasonable doubt attached to the opinion that the Turkey is a native of North America. We believe, previously to the settlement of Europeans in that country, that it existed in a wild state from the Isthmus of Darien far along the north-western districts of North America; but at present it is chiefly found in the wooded tracts of Alabama, Arkansas, Kentucky, Indiana, Illinois, Louisiana, Ohio, and Tennessee.

Europe is indebted for its introduction to some of the first discoverers of the North American continent; but to which of these the boon is owing seems now impossible to determine.

We incline to believe that it was brought to England between the years 1532 and 1573; and we so believe, because Sir Anthony Fitzherbert, in “The Book of Husbandry,” published in the year first named, speaks of the management of ” hennes, ducks, geese, and peyhennes,” but makes no mention of the Turkey; but Tusser, in his ” Five Hun­dred Points of Good Husbandry,” printed in 1573, speaks of them as a usual part of our ” Christmas husbandry fare.” He says—

” Good bread and good drink, a good fire in the hall,
Brown padding, and souse, and good mustard withalL
Beef, mutton, and pork, shred pies of the best,
Pig, veal, goose, and capon, and turkey well drest,
Cheese, apples, and nuts, joly carols to hear,
As then in the country, is counted good cheer.”

We are confirmed in our opinion as to the period at which the Turkey was introduced by the tradition in the family of 8k George Strickland, Bart., of Boynton, in Yorkshire, that one of their ancestors first brought the Turkey to England.

That ancestor must have been William Strickland, who accompanied Sebastian Cabot in his voyages of discovery to the coast of America. Edward the Sixth, about the year 1550, made to him a grant of arms, and of these the crest is ” A Turkey-cock in his pride, proper.”  A portrait of that William Strickland, in his naval uniform, is still preserved at Boynton Hall.

Barnaby Googe, in his Heresbach’s ” Four Books on Husbandry” is the first English writer we know to have written on the breeding of this fowl. This was in the year 1578; and he says, ” Turky Cocks we have not long had amongst us; for before the year of our Lord 1530 they were not seen with us, nor, I believe, known to the old writers.

The colour of their feathers is for the most part white, black, or pied white and black, and some blue and black. Their feet are like unto the Peacocks, their tails short, but spread, and borne up at times after the Peacock’s guise.

The heads and necks of them are naked, without feathers, covered with a wrinkled skin, in manner of a cowl, or hood, which, hanging over their bills, they draw up or let fall at their pleasure. The cock hath the greater wattles under his chin, and on his breast a tuft of hair.”

Googe gives other particulars of their form and habits, concluding by saying that numbers of them were kept at the residence ” of that godly and virtuous Sempronia, that Lady Hales, of Kent, who was first the wife of Sir Walter Mauntill, of Northamptonshire.”

Why it should have received the name of the Turkey Cock is now difficult to discover. All other European nations call it by some name allusive to its Indian origin, and we can only surmise that the English name may have been bestowed, as the term ” Turk” is still bestowed upon any man or animal distinguished for its pompous, salacious, and domineering habits.

This, however, is mere surmise; and no better foundation would the supposition have, that as Turkois is the ancient mode of spelling the name of that precious stone, a native of Turkey, so Turkois cock may have been a name allusive to the bright blue, or Turquoise-coloured wrinkles that helmet its head.

We have, however, seen it stated that the old Turkish military costume, in which the red cap (fez) coming down over the ears, combined with a dark flowing robe, gave to the Mussulman so apparelled a degree of resemblance to our Turkey Cock.