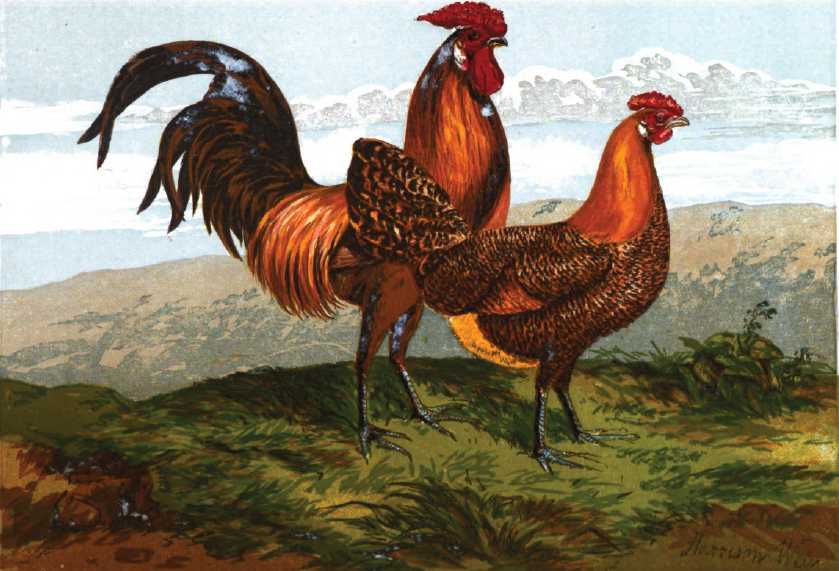 The Poultry Book of 1853 has this to say on the origins of the Hamburgh chickens:

It deserves our notice that all tradition, all our oldest naturalists, and even the names by which onr fowls were originally called, all assign to them an Eastern origin. Even many of our modern names,—Bantam, Malay, Shanghae, Ghittagong, and Brahmapoutra,—point to a similar origin.

Nor is the fowl now under our consideration an exception, for its earliest describer, Aldrovandus, calls it the Gallina Turcica, or Turkish Fowl. The white body, the black markings, the greenish-black tail, and the blue-tinged legs, are all characters which show that the old naturalist bad before him specimens of the Silver Hamburgh.

Why it should be called the Hamburgh fowl seems inexplicable, except upon the supposition that the Levant merchants residing at Hamburgh introduced them from Turkey or elsewhere, and that from Hamburgh they were exported into this country.

By a similar transit did our Black Hamburgh Grapes derive their names; for they are certainly natives of Spain, imported by the Hamburgh merchants, and first known to us as Hamburgh Grapes, because purchased by us there.

Wherever may have been its place of origin, or however its present name may have been derived, it would appear that the Hamburgh fowl was among the occupants of the poultry-yard of our monasteries as early as the beginning of the fourteenth century, since Chaucer has described a cock in their possession, which was evidently of the Golden Hamburgh breed.

As with other breeds of poultry, there are a number of sub-varieties of the Hamburgh chickens. The Poultry Book lists these:

Silver-pencilled Hamburgh. – This is known also as the Bolton Grey, from being extensively and superiorly cultivated in and about Bolton, in Lancashire;

Creole, from the intermixture of the black and white;

Coral, because the numerous points of the polished, bright scarlet rose-comb bear no distant resemblance to grains of red coral;

Pencilled Dutch, because many are imported from Holland;

Dutch Every-day-layer and Everlastings, for the same reason, and their great productiveness as layers ;

Chitteprat, the derivation of which is not so obvious. Chitteface, according to Bailey the lexicographer, means a meagre child; and Chitteprat, if intended to describe a diminutive hen, would not be misapplied to one of this variety.

The Golden-pencilled Hamburgh varies chiefly from the Silver-pencilled in having a yellowish buff or yellowish bay ground-colour in its plumage, where the latter has white, and in being rather larger.

This is the only variety of the Hamburghs, we are informed by Mr. Bond, one of our best authorities, that has not been extensively bred among the Yorkshire fanciers. This is the more unaccountable, because we never heard that they are inferior in useful properties to their silver relatives, and to most tastes are at least their equals in beauty.

In one district of Lancashire both of them are kept to an extent which has procured for them the names of Bolton Bays and Bolton Greys, as we have just noticed of the silver. These golden-pencilled have also been known as Dutch Everyday-layers, for the reasons previously assigned.

Black Hamburghs.—This is Also called the Black Pheasant Fowl, though it has no spangles, but a plumage uniformly of rich, glossy, green-black. In form they closely resemble other Hamburghs, and may bear the same relationship to them that the Black Shanghaes do to the buff and other coloured.