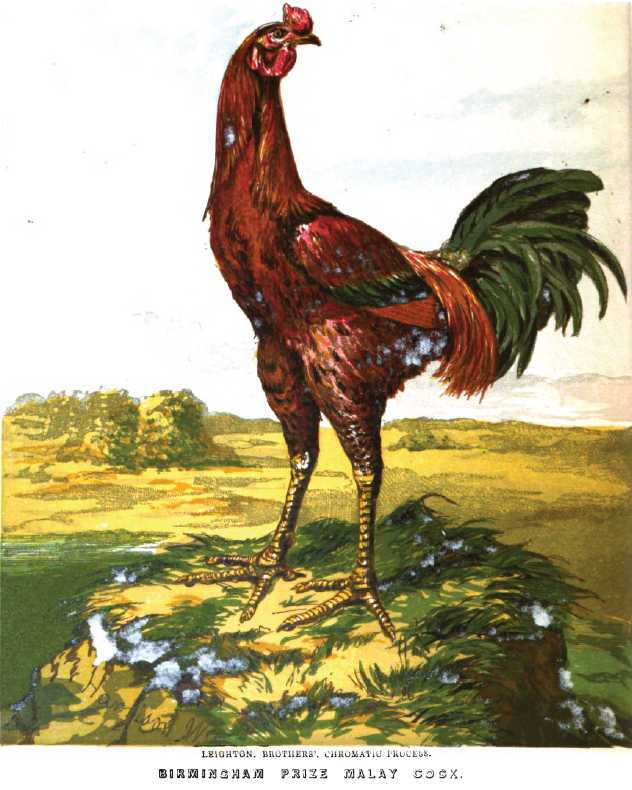 Birmingham Prize Winning Malay Cockerel owned by Mr Ballance . Painted by Harrison Weir for the 1853 Edition of The Poultry Book

“This [Malay Chickens] is another of the tenants of our poultry yard for which we are indebted to tropical latitudes, and which, though natives of such a constantly torrid climate, have the power of enduring, uninjured, temperatures so varying, so cold, and so trying as our own”

The Malay chicken was noted in the Poultry Book of 1853 as a large bird with an unpleasant nature. It has this to say on the nature of Malay chickens.

Although the Malay fowl stands high upon the leg, and its height and attitude give it an appearance of length disproportioned to breadth, yet it is not a gawky bird. Its carriage preserves it from deserving such a cognomen; its gait being free and bold, and its appearance altogether entitling it to be included among the aristocracy of poultry.

The disposition of both sexes is pugnacious; and one of our friends ceased to keep them because, among other causes, he found the cock excessively quarrelsome, and cruelly disposed towards the chicks.

The cock’s neat, serpent-like head, his fierce and piercing eye, his erect carriage, and the unmistakable signs of sinewy strength exhibited in his every limb, combine to render him one of the most striking of the tenants of the poultry-yard.

His dames have the appearance, and often the temper, of vixens; yet, though of plainer costume, they have a bearing and a look almost as aristocratic as their lord’s.

I don’t think you would want to keep Malay chickens with children around!

The poultry book says on the size of Malay chickens:

“One peculiarity of this bird,” observes Mr. Ballance, of Taunton, one of the most successful exhibitors of this variety, “is that the feathers of the neck do not become more ample and longer as they approach the shoulders; consequently, the long neck appears of the same diameter at the shoulders as it does at the throat. This contrasts it remarkably with the Game and all other breeds of our fowls.”

Mr. Rutherford, in a communication to the Royal Dublin Society, stated that he had one which weighed, when alive, without being fatted, 13 lbs. [5.87 kilograms]