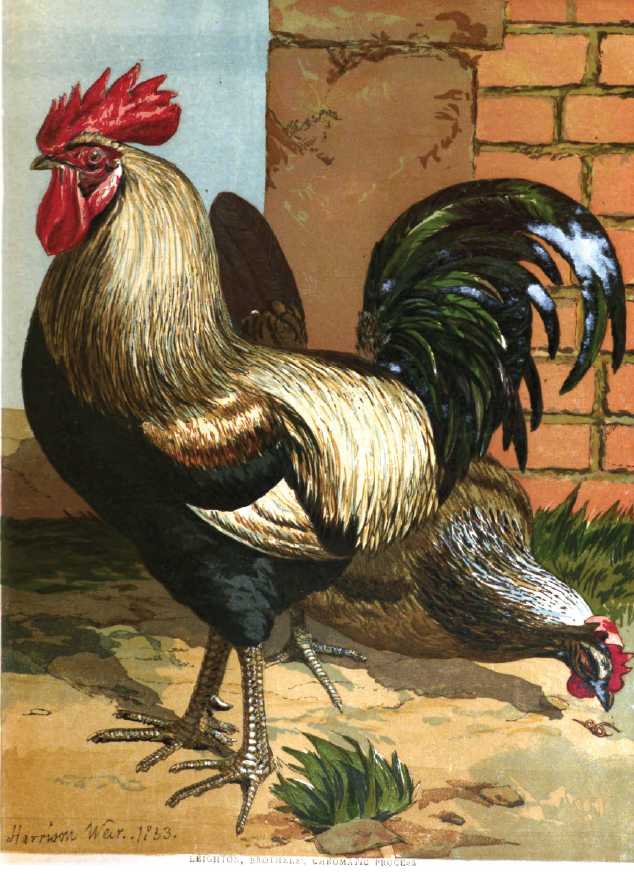 The name doesn’t really do them justice, Captain Hornby’s ‘Grey Dorkings’ were anything but grey and boring and by the second version of this book in 1867 this illustration was renamed Coloured Dorkings

The Poultry Book of 1853 has this to say about Dorkings

Grey and speckled, as applied to Dorkings, may be regarded as synonymous terms; but the Spangled (although, as before observed, produced from grey parents) have a distinct character of plumage.

The cock presents a rich combination of colours, indefinitely varied in different specimens. One principal feature, however, maybe stated is his light hackle, tipped with dark brown or black.

The saddle-feathers also being similarly decorated, add to the extreme brilliancy of his appearance; the back and wing-coverts are of rich brown, maroon, and blue, interspersed with white; breast and belly mottled black and white; sickle feathers iridescent green; smaller tail feathers white, as also the primary wing feathers.

The hens have a general grey body colour, relieved by the same rich brown and white.

The grey and the spangled comprise the more common forms in which the coloured Dorking family is presented to us; but there are, however, several subdivisions, for whose description we are indebted to the kindness of Mr. Baily.

Silver.—Same division of colours as in the Japan cock; but the straw colour is exchanged for one approaching more nearly to white. Hens to match, slate-coloured body and hackle.

Pencilled.—Black and white, and the breast tinged with red.

Golden.—Cock’s breast, thighs, and tail quite black; hackle, saddle, and neck red. Hens to match, dark brown, spotted with black. In these there should not be one white feather.

Besides these we have the Cuckoo Dorking, so called from the fancied resemblance of its plumage to the feathers on the Cuckoo’s breast; and also the Muff Dorking, disfigured by a huge beard. The latter is an accidental production, and the muffled race have no claims to be regarded as a distinct variety.