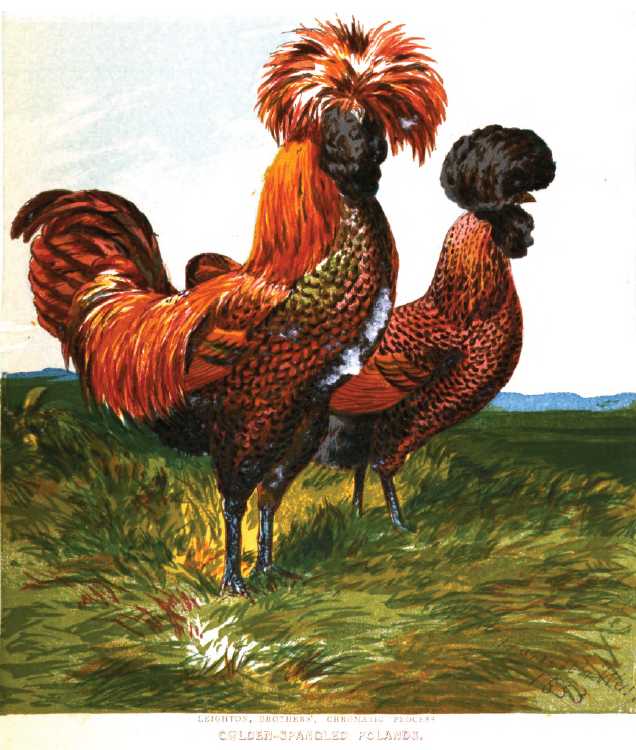 Of all the breeds of chicken, the Polish have to be the most amazing. Their amazing head feathers forming bonnets above the incredible neck feathers and beautiful plumage.

The premier breeder at this time was Mr W G Vivian whose hens these were. At this time they were often known as Polands but 15 years later the term Polish was accepted as the norm.

From the Poultry Book 1853  NB They were more often called Polands at this date:-

The Golden spangled Poland cock possesses, in a high degree, all the rich attractions of his class. His crest, or top-knot, we think, should be uniform chestnut-red, the admixture of white not being desirable; and, however great an acquisition the perfectly white crest would undoubtedly prove, as yet it has not been attained.

The beard is deep black; the neck voluminously furnished with hackles of an orange red; and the back and saddle are of the same glowing tint.

The general ground colour of the body is a clear ochre yellow, spangled with black, which in some shades becomes a resplendent green. The primary feathers of the wing are also of the same bright ochre, while the wing coverts are richly laced.

The tail is well plumed, its sickle feathers being dark brown; but the smaller ones on the side are of a deeper tone of ochre, laced with black. Below the vent, and around the thighs, the feathers are black.

The legs, in both sexes, must be blue, or of a pale slate colour, and perfectly clean, and this holds good with reference to all the other varieties.

The Golden spangled Poland hen is an exceedingly beautiful bird; her whole body being still more distinctly marked, in the same colours as the cook. The feathers of her breast, neck, and back are all spangled; the wing coverts, as generally happens in spangled birds, being laced; her tail, also, should be of the same clear tint, laced and tipped with black; while the top-knot is usually dark, and sometimes nearly black.

An accurate description of the precise arrangement and tone of the feathering of the Spangled Poland is, however, a matter of some difficulty, since the best specimens will occasionally vary.

Their colours, again, undergo change according to the age of the bird; for it is an undoubted fact that Polands increase in beauty for three or four years, and it is not till the third or fourth moult that they attain their full size and brilliancy of feather. The top-knot, too, we should observe, increases up to this period.