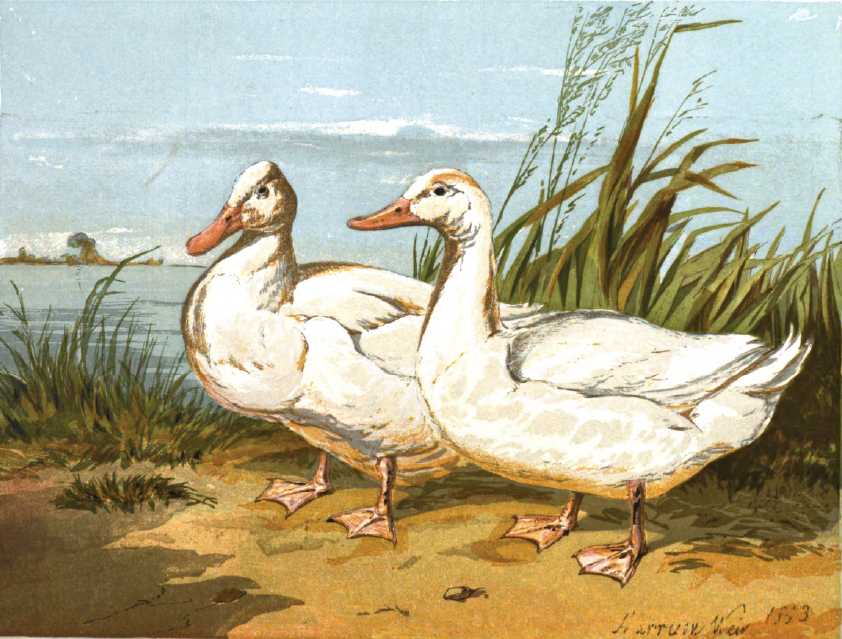 White Aylesbury Ducks belonging to Captain Hornby, RN and painted by Harrison Weir from the 1853 edition of The Poultry Book

I have a special liking for this painting of the Aylesbury duck as it reminds me of pet ducks Bumble & Bee sadly now swimming and chasing the ladies in the big pond in the sky.

It’s very interesting to note the comments regarding egg production. The Aylesbury duck today is purely considered a table bird and yet the numbers of eggs per year below were greater than any chicken at that time and better than most ducks today.

If anything it does go to show how much variation it is possible to have within different strains of the same breed.

The following particulars, from the pen of Mr. Edwards, of the Lyndhurst Road Station, Hants, are worthy of careful attention, as coming from one who has bred and exhibited some of the best specimens we have ever seen.

“The weight of the adult Aylesbury Duck should average, if properly fed, from 10 Ibs. to 12 Ibs. the pair (Duck and Drake). I possess, however, one Drake that weighs upwards of 8 Ibs., and would probably, if fattened, reach to 10 Ibs.

They are very prolific layers. Last year (1852), during the spring and summer months, I had 261 eggs from two ducks, and they again commenced laying three weeks before Christmas, making altogether the large number of 300 eggs in the course of the twelve months; in addition to which one of them sat twice, the other only once, the three nests giving thirty young ones.

The eggs vary in colour, some being white, while others are of pale blue. As a further recommendation for them, in an economical point of view, I must mention my belief that their consumption of food is less than that of the common Duck; and another advantage may be found in their comparative silence from the continuous ‘ quack, quack, quack,’ of the latter bird.

They aIso attain greater weight in less time; and from their superior appearance, when plucked, are a far more marketable article.”

Mr. Edwards’s birds, either from their good keep or careful selection, seem to have been far more prolific than the generality of Ducks of this breed.