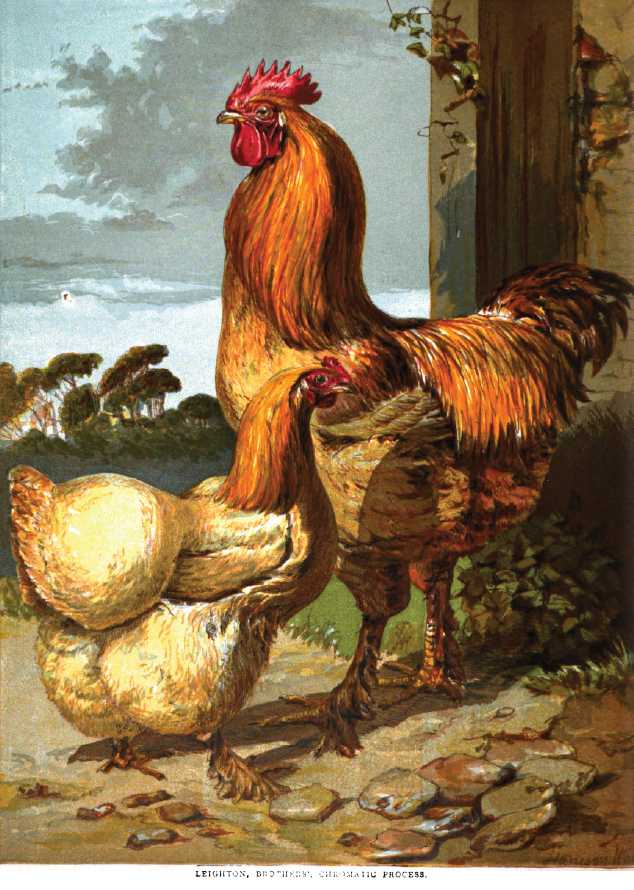 The most striking thing in this picture is the large difference in size between the male and female. Although these illustrations are works of art, they’re also technical drawings and so I assume the relative sizes are correct.

This is backed up in the text where the expected weight of the cock is around 50% more than the hen.

The next colour comprises the different shades of buff and yellow, and this is the favourite class,—partly because it is exceedingly neat and pretty in its appearance, partly because it has been ever sedulously cultivated, but most of all on account of its including, beyond doubt, a larger number of birds of first-rate quality, in other respects, than any other sub-variety. For these reasons we may be allowed to devote to its description a little more space than we may be able to spare for each of the other colours.

Of the Buffs, the cocks vary from a dark ginger or red to a light or yellow-buff. The former have the hackles, both neck and saddle, of a bright orange-red; the saddle hackle feathers are orange-crimson, and the rest of the body a dark buff or bay, without any black, except the tail, and perhaps some of the quill feathers of the wing.

The Yellow-Buff (Lemon Cochin) is more of a lemon colour, but without white feathers, which.give a mealy appearance by no means pleasing. The hackles are of a bright golden yellow; the saddle and outside of the wings a shade darker, but still yellow; and the rest of the body a beautiful uniform light buff, except the tail, which is black.

Black markings in the hackles are by some judges thought to be equally objectionable in each. The Buff hens vary from a dark fawn to a light yellow, or almost a canary colour; and the nearer they approach the latter shade the more they are esteemed. The colour should be as uniform as possible; but we do not object to a slight necklace or dark marking in the neck hackle, and the tail is usually black.

We may hint to breeders that it is from the yellow cocks, rather than from, the reds, that they may expect to breed hens of the light or favourite canary shades.