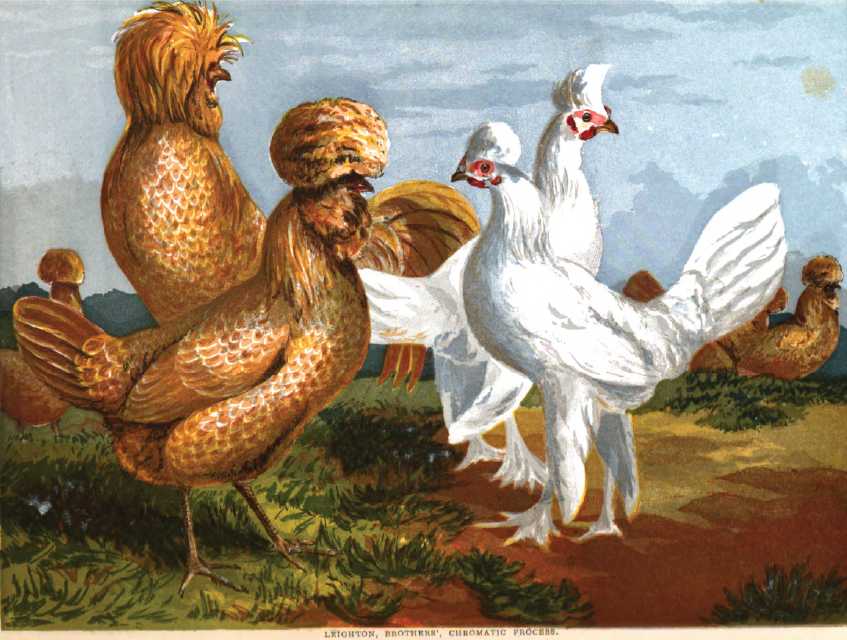 Yet more of Mr Vivian’s Polish hens. The Buff Polish have the classic Polish bonnet but the White Polish to the right of the picture have a different head feather style.

They also seem to have long leg feathers whereas the Buff Polish don’t.

Polands are eminently good layers, usually commencing early in the spring, and continuing the process, with brief intermissions, till the period of moulting.

During winter they are not to be relied on, and other fowls must be sought to furnish the supply at that season.

One hundred and fifty would be a moderate yearly average; but Mr. Hewitt tells us of a hen that laid 280 eggs in one season; ” however,” he adds, ” they vary greatly in productiveness, some being rather indifferent layers, and to do well, they require a warm sheltered walk of a sandy character.”

The white-crested black birds, of which variety was Mr. Hewitt’s hen, just referred to, are usually considered the best layers; and the average weight of their eggs is placed at 2 oz.; but any difference in their favour on this account would be compensated by the higher average in point of size of the eggs of the spangled and bearded birds, which may be given as 2¼ oz.

The eggs of all are pure white, and Mr. Hewitt has remarked that they vary much in shape, the older hens laying those of a rounder, pullets those of a more oblong form. Those of the yellow-spangled variety would seem to be somewhat larger than the others.

Polands are placed in the class known as everlasting layers; and although this is not in all cases strictly true, it is certainly the general rule. In nearly every instance their desire for incubation occurs late in summer, or in the autumn, being thus postponed till their laying season is approaching its end. But, even if this disposition should be manifested, they are by no means to be depended on for a clutch of chickens, as not un-frequently they desert their nest after five or six days’ occupation; but when they do persevere to the end, the usual care and feelings of maternity are duly extended to the young brood.

The beardless, far more commonly than the bearded, evince this disposition to sit; indeed in the best strains of the latter it is altogether a rare and exceptionable event, as is instanced by only three hens (two white and one silver) having ever shown the desire among the large collection of bearded Polands belonging to Mr. Vivian.

This trait in the nature of Polands will be considered advantageous or otherwise according to the views of their possessor. The disadvantage is the necessity of procuring other hens for maternal duties, while the continuous production of eggs is to be pleaded in their favour. But in some cases where space is limited, and their rich plumage and elegance of form brings their abode into the more ornamental portion of the shrubbery or garden, their non-brooding character becomes valuable.

In other localities, and under other conditions, they do but share the praise or dispraise of this attribute with Spanish and the Hamburghs.