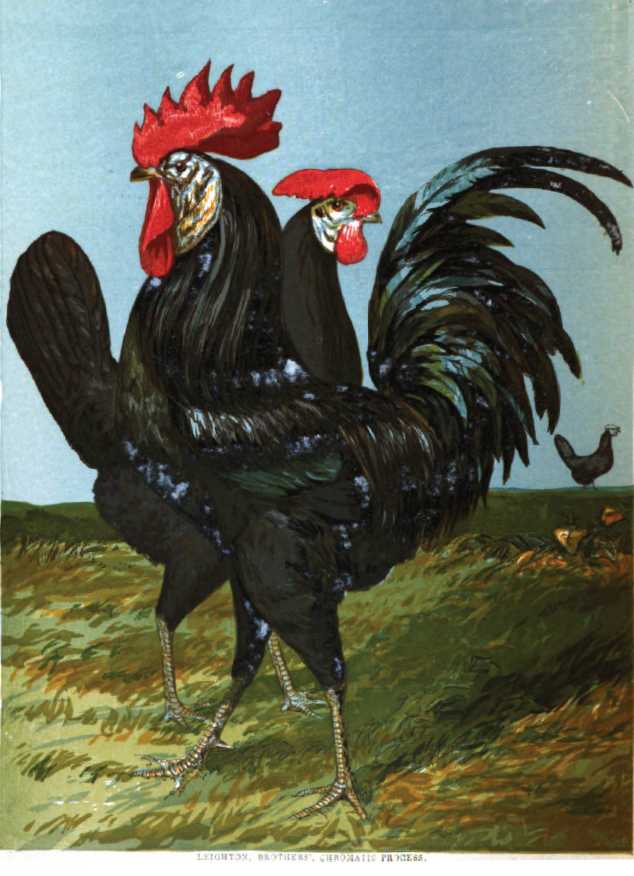 These Black Spanish Chickens Belonging to Captain Hornby R. N.(obviously the second son of the family as the heir wouldn’t risk himself in the navy!) these really do look Spanish to me.

You can imagine this pair breaking out into a Flamenco, definitely Spanish Grandees, the erect stance and dramatic tail feathers standing proud. As they appear, somewhat lighter than the Cochins, the cocks being around 7lbs.

From the 1853 Poultry Book which says of Spanish chickens:

History of the Spanish Fowl

This race possesses striking characteristics in its large single comb and white face. And however these features have undergone changes, either from breeding in and in, or the admixture of other families, we have usually sufficient evidence of their origin even when disfigured by illegitimate alliances.

The names by which many of our domestic poultry are at present known to us, so far as they are indicative of their native country, are frequently matters of discussion. That Poland gave us the tufted bird, so remarkable an ornament to our yards and exhibi­tions, or that the Hamburghs were originally of German extraction, the evidence that we now possess has not yet certified; but with Spanish the case appears different; though possibly the wider term of the “Mediterranean fowl” might be still more applicable.

From Gibraltar to Syria—north and south—the countries that border on that vast inland sea, with its numerous islands, abound with fowls that bear such resemblance to the Spanish race, in the striking points we have alluded to, as may warrant our assigning them to one common stock. Names also that denote some subdivisions of this family strengthen our conclusion; for the Anconas and Minorca* derive their designations from localities that carry us far beyond mere Spanish boundaries.

The quantity of poultry kept in those countries greatly exceeds anything we witness in England, even since public attention has been more generally given to this branch of agricultural economy. Purity of blood, however, is there but little esteemed, and the miscellaneous collection of hybrids described by every Mediterranean traveller who has touched on this subject, will probably long remain in the same heterogeneous state as we ourselves found it many years since.

But for details let us turn to the communications of those of our correspondents who are best acquainted with this race.

” In Spanish, of course, one great point is the dead-white face, spreading upwards entirely over the eye : but this is not always attained by young birds of the year. But if well-bred, there will be, even at that early period, a slight milky look on that part of the face.

Pullets do not gain the white face so soon as the cockerels. In the best Spanish strains the comb of the cock will be perfectly upright, that of the hen may lop over; and the lopping over of that of the cock does not disqualify (I trust it soon may).”

For the following summary we are indebted to the kindness of E. Bond, Esq.:—

“Black Spanish—Male.—Head large; beak of moderate size ; eyos very bright; comb single, upright, very large, red as coral, and slightly serrated: face and cheeks perfectly white, the white extending round the eye; wattles long and pendulous; neck of moderate length, but strong; body broad and close-feathered; wings of medium size; rather long in the leg, which is of a bluish-white colour; tail a good plume; plumage a glossy black, having a greenish shade in the sun.

Characteristics.—The uniformly fine black plumage; immense comb in both sexes; and the white face and ear-lobes, which increase with age, especially in the female.”

The beak of the Spanish cock is certainly long; but we should hesitate to call the head large, as it does not appear to us to exceed the proportionate size of other fowls. Mr. Bond, it will be seen, describes the legs of the male bird as bluish-white, and those of the female as almost a perfect white. Now we should prefer to have the legs of a dark blue; and the under part of the foot, with a portion of its side, would be the only place where we should wish to perceive any lighter shade.

“A really good cock,” Captain Hornby tells us, ” ought to be white from around the eye quite up to where the comb joins; the latter should be erect, without any excres­cences on it; in the hen it falls over. But although I would not disqualify a cock with a foiling comb, it would certainly be a point against him. I have a cock whose wattles are lined inside with white, like the very finest white satin. This, however, is the only instance of it that ever came before me.”