Sultan Fowls | Chickens of the Sultan 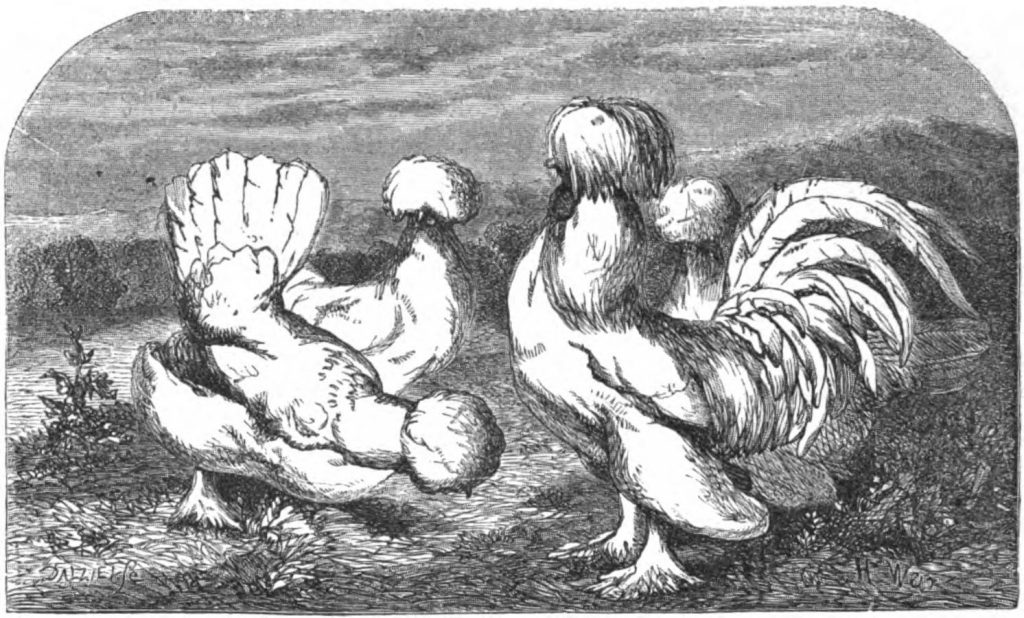 Extract from The Poultry Book of 1867

Sultan fowls, or Feather-footed White Polish, are a very elegant and pleasing variety. They were first imported into this country from Turkey, by Miss Watts of Hampstead.  Their exceedingly ornamental appearance has gained them many admirers, and they are now established favourites at our shows.

The following description of the Sultan fowls was published by the lady above-mentioned :—

The Serai-Täook, or Fowls of the Sultan.

This is the last Polish fowl introduced among us: they partake of the character of Polish in their chief characteristics, in compactness of form and good laying qualities. They were sent to us by a friend living at Constantinople, in January, 1854.

A year before, we had sent him some Cochin-China fowls, with which he was very much pleased; and when his son soon after came to England, he said he could send from Turkey some fowls with which we should be pleased.

Scraps of information about muffs, and divers beauties and decorations, arrived before the fowls. These led to expectations of something much prettier than the pretty Ptarmigan, in which we had always noticed a certain uncertainty in tuft and comb.

In January the Sultan fowls arrived in a steamer chiefly manned by Turks. The voyage had been long and rough; and poor fowls so rolled over and glued into one mass with filth were never seen.

Months afterwards, with the aid of one of the first fanciers in the country, we spent an hour in trying to ascertain whether the feathers of the cock were white or striped, and almost concluded that the last was the true state of the case, although they had been described by our friend as ‘ bellissimi galli bianchi.’

We at once saw enough to make us very unwilling to be entirely dependent for the breed on the one sad-looking gentleman, with his tuft heavy with dirt, dirt for a mantle, and his long clogged tail hanging round on one side; and we wrote directly for another importation, especially for a cock, and to ask the name they had at home.

In answer to the first request, we found that good fowls of the kind are difficult to get there. Our friend has ever since been trying to get us two or three more, but cannot succeed either in Constantinople or other parts of Turkey. The first he can meet with will be sent.

With regard to the name, he told us they are called Serai-Täook. Serai, as is known by every reader of Eastern lore, is the name of the Sultan’s palace; Täook is Turkish for fowl; the simplest translation of this is, ‘Sultan’s fowls,’ or ‘ fowls of the Sultan’.  A name which has the double advantage of being the nearest to be found to that by which they have been known in their own country, and of designating the country from which they came.

Time very soon restored the fowls to perfect health and partial cleanliness; but it was not until after the moulting season that they showed themselves as the ‘bellissimi galli bianchi‘ described by our Constantinople friend.