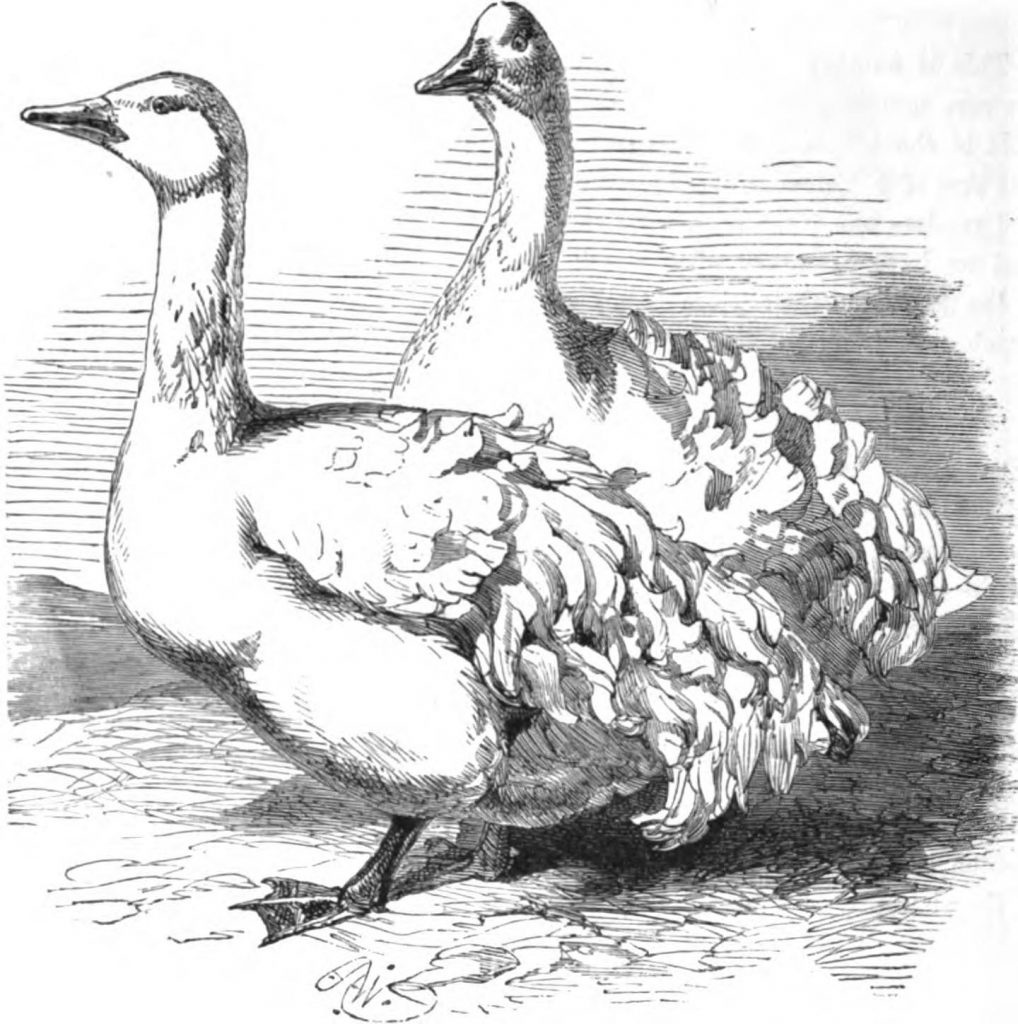 The old spelling of Sebastopol which is now commonly called Sevastopol seems to have stuck when applied to this breed of goose. The curled feather of Sebastopol geese were much prized as being the best down for stuffing pillows. Nowadays they are mainly kept as ornamental birds.

The Poultry Book of 1867 has this to say about the breed which seems to fix the introduction of Sebastopol Geese into Britain quite tightly.

Among the most singular variations of plumage occurring in the domestic geese, may be mentioned that found in the so-called Sebastopol geese, figured at the commencement of this chapter.

These geese were first exhibited by Mr. Harvey D. Bayly, in 1860, and were delineated and described in the Illustrated London News, of Sept. 8. The following was the account that was published respecting them on their first introduction :—
“Amongst the geese there were two curious specimens from Sebastopol, exhi­bited by Mr. T. H. D. Bayly. These birds are somewhat smaller than those of this country at a mature size, but they are of the purest white and the most perfect form, whilst the more conspicuous portion of their plumage is of a curly nature, affording a very striking contrast to the feathers of the ordinary English goose.

The feathers on the back are curved and frilled upwards; the secondary feathers of the wings are elongated and twisted, also the tail coverts.

These geese were sent to Mr. Bayly by John Harvey, Esq., who had been cruising in the Black Sea. Their weight is 11 lbs. each. They are of precisely the same habits as our English geese”

The great peculiarity in these geese consists in the extreme elongation of the feathers of the back (scapulars and tail coverts). The shafts of these long feathers split down their entire length, and then become twisted, so as to give rise to the peculiar curled appearance shown in the wood-cut.

Since their first introduction these geese have propagated very freely, and are now constantly to be seen in the various poultry shows. As combining the ornamental and the useful, these quaint birds have few superiors.