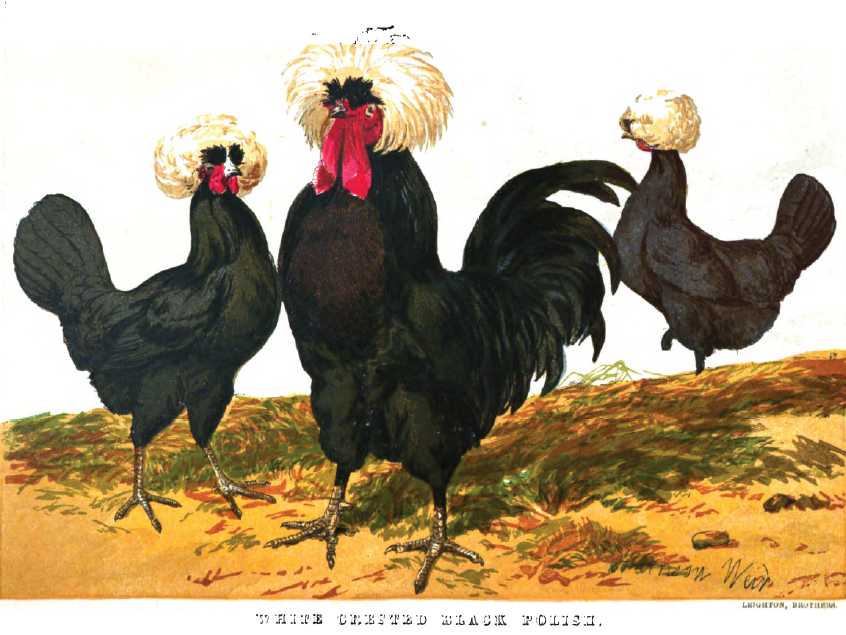 Of all the breeds, the Polish are my favourite. They just remind me of Edwardian ladies with their large hats, elegantly promenading up and down the pier at Brighton.

Sadly the scan wasn’t very good but I’ve done my best with it.

There’s a long piece in the Poultry Book of 1867 on the origin of Polish chickens. It’s quite amusing in that it actually contradicts itself as you’ll see from the excerpts below.

Under the title of Polish Fowls are included all those varieties characterized by the possession of a very largely developed crest of feathers on the head. Their history can be traced back as far as the time of Ulysses Aldrovandi, better known under his Latinized name of Aldrovandus, a Bolognese gentleman, who was born in 1527, and died in 1605. Aldrovandus devoted his time to the pursuit of natural history, and exhausted his resources in collecting specimens and in the payment of artists and engravers…..

….There can be but little doubt that these birds were the progenitors of the present breeds known as Polands or Polish fowls ; under which title are included, in our present nomenclature, those varieties of fowls characterized by the possession of a very largely developed crest of feathers.

Of the origin of the Polish fowls, little or nothing is known: they are not unfrequently stated to be the descendants of the great fowl of St. Jago; but as there are more than twenty places in different quarters of the globe termed St. Jago, the information is not of a very satisfactory character.

With the kingdom of Poland, it is certain they have no connection whatever; whence, then, it may be asked, is the origin of the title by which they are so generally known ? By some writers this name has been declared to be a recent innovation; but the White-crested Black have been known by it to the London dealers for at least half a century; and in the earliest editions of  “Mowbray on Domestic Poultry,” they are termed Polands.

Dr Horner’s Explanation of the Origin of Polish Chickens

The most satisfactory solution to the question is that offered by the late Dr. Horner, who wrote as follows: “In scientific nomenclature, it has ever been the practice to designate new genera, species, or varieties, from certain resemblances to other well-known or familiar things, or from certain striking features; so has it been, I conceive, with the Polish fowl.

Its remarkably elevated, rounded, and prominent skull-cap, or poll, could not escape the observation of the older naturalists. Again, the large crest of feathers, or top-knot, is another attribute which must have bespoken consideration in any name to be given to this variety of fowl.

The term poll is not unfrequently used to designate the feathers, hair, or even wool, on the head of an animal: so that whether we look at the unique anatomical conformation of the bird’s head, or at its more ostensible bunch of feathers, it must have commanded attention.

Its head or poll was its peculiarity—i.e. the bird with the remarkable head or poll; hence Pollish or Polish fowl. It is quite evident that this bird has nothing to do with the country of Poland; and the disease of the hair, Plica polonica, offers no analogy, as in this disease the hair is closely matted to the head; and is usually also thin or spare in quantity, very different to the full, erect, and flowing top-knot of the Polish fowl.”

Presuming this derivation to be correct, the superiority of the term Polish over that of Polands is obvious, without taking into consideration the grammatical inaccuracy of the latter title.