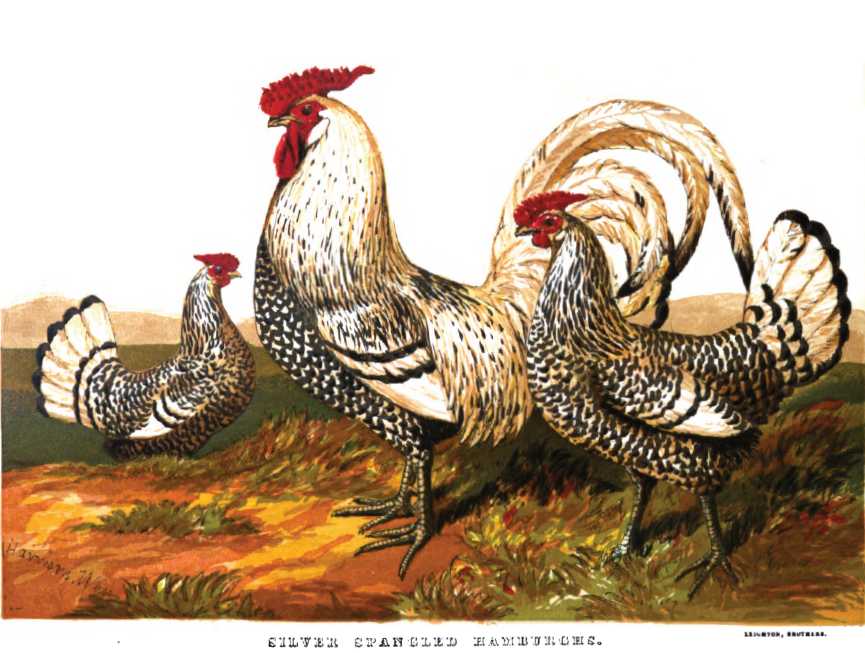 In the Silver spangled Hamburgh chickens, as in the Golden, two different varieties are included. The Lancashire Silver Mooneys, which were bred and exhibited in Lancashire by the old clubs, and the Yorkshire Silver-pheasant fowls.

Silver Mooneys have rather large coarse heads, rose combs, dark faces, very close small deaf-ears, which are rarely pure white, but generally, in the hens, of a sort of leaden colour. The plumage of the hens is hard and close, ground-colour a beautiful silvery white, with a very large, round, rich green-black moons or spangles on the end of each of the body feathers.

The hackle of the cock is silvery-white, and free from yellow shade; the ends of the longest feathers are tipped with rich black; the neck of the hen is silver striped with rich green-black, the moons on the greater and lesser wing coverts of both sexes forming two distinct rich black bars across the wing.

The tail of the hen is silver on the outside, the feathers terminating with very large rich black moons; the inside of the tail much darker than the outside. The tail in the cock is almost entirely black.

The Yorkshire Silver-pheasants have neat heads, and rose combs, with large deaf-ears which are often pure white. The plumage has pure white ground, with a black spangle on the end of each of the body feathers ; the spangles are smaller, not so rich in colour, and seldom so round as in the mooney; the hackle of the cocks is white, often tinged with yellow, the longest feathers slightly tipped with black.

The neck of the hen is white, striped with black, the spangles on the greater and lesser wing coverts forming two distinct bars across the wing. The tail of both cock and hen white, ending with black spangles.

In the true Silver-mooney hen the spangles are very rich and round; these hens are often seen at shows, but they are seldom exhibited with the true mooney cocks, the latter finding little favour on account of their stained deaf-ears and dark tail, and smaller and shorter build, yet it is quite impossible to breed good Mooney hens with any other than a true-bred Mooney cock.

A large number of the clearest tailed Silver-spangled cocks are bred from Lancashire Silver-mooney cocks and rather light Yorkshire Silver-pheasant hens; the cockerels from this cross frequently have very pure white deaf-ears and clear tails, but they are generally too light on the breast, particularly in the higher part.

The pullets from the cross are quite worthless, being nearly always deficient in mooning on the shoulder coverts. Should a pullet by any chance appear amongst these cross breeds passable in marking, she always, at her first moult, becomes light on the shoulder and higher part of the back; whereas the true-bred Silver-mooney hen will moult true all her life without the slightest deterioration in the marking of any part.

I have now a Silver-mooney hen, seven years old, that has often been successfully exhibited and has moulted without the slightest perceptible difference in marking, except that the moons appear to increase slightly in size.

The two hens formerly exhibited so successfully by Mr. Beldon, and afterwards by Mr. Wood of Kendal, are true Lancashire Mooneys, and though they have been so very frequently shown for at least six years as seldom to have been more than a few weeks at once at their own home, their marking is as near perfection as possible.