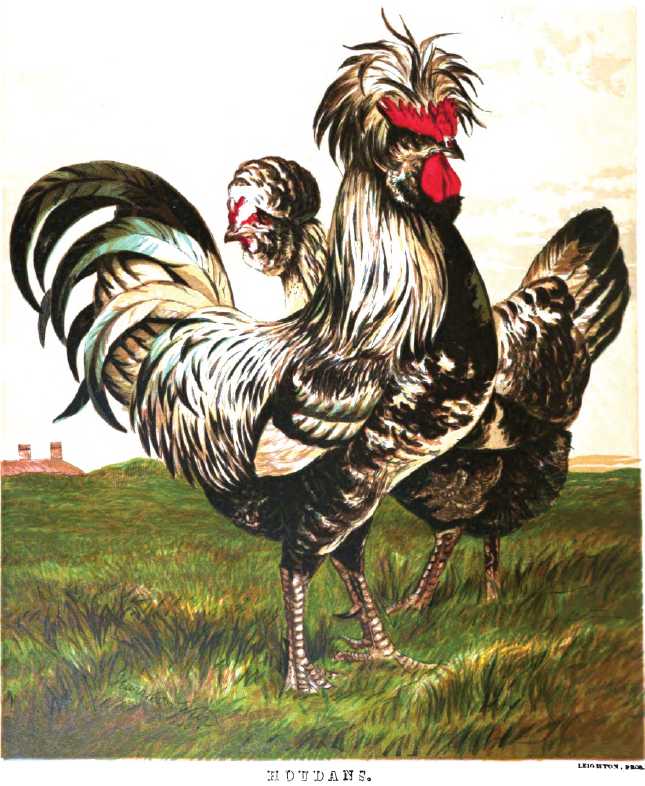 Houdan Chickens painted by Harrison Weir from the Poultry Book 1867

Houdan chickens were commonly kept in France as a meat bird. It’s surprising that they could eat something so beautiful, but I suppose it made a nice change from snails and frogs legs. They are very similar in appearance to the Polish breeds with their top knot.

They quote from a pamphlet by M. Delafosse:-

“That it is to be desired that the excellent and fine breed of Houdan poultry should be propagated in every other country, as it is in France where the poultry trade has taken such a development that it forms one of the principal sources of riches”

A few statistics of this trade in the neighbourhood of Houdan will give a correct idea of its importance. At the markets of Houdan, Dreux, and Nogent-le-Soi, there are sold annually upwards of 6,000,000 fat poultry.

In an article on the relative economical merits of the several varieties of French poultry which was published in The Field, it was stated:—

” The Houdans may certainly be regarded as the Dorkings of France. Large, heavy, short-legged, five-toed fowls, with small, light bone, a remarkable absence of offal, and with irregularly speckled or mottled plumage, they strongly recall to mind the old-fashioned coloured Dorking, as it existed before any attention had been directed to uniformity of feathering by the poultry shows.

Their merits as table fowl are of the highest excellence. No pure-bred chickens mature with greater, or perhaps with as great a degree of rapidity; they feather early, are extremely hardy, and are consequently easily reared.

The old birds are robust, and the eggs, which are numerous, are remarkable as being almost invariably fertile. There can be no doubt of the economic value of this race, more especially for table purposes”