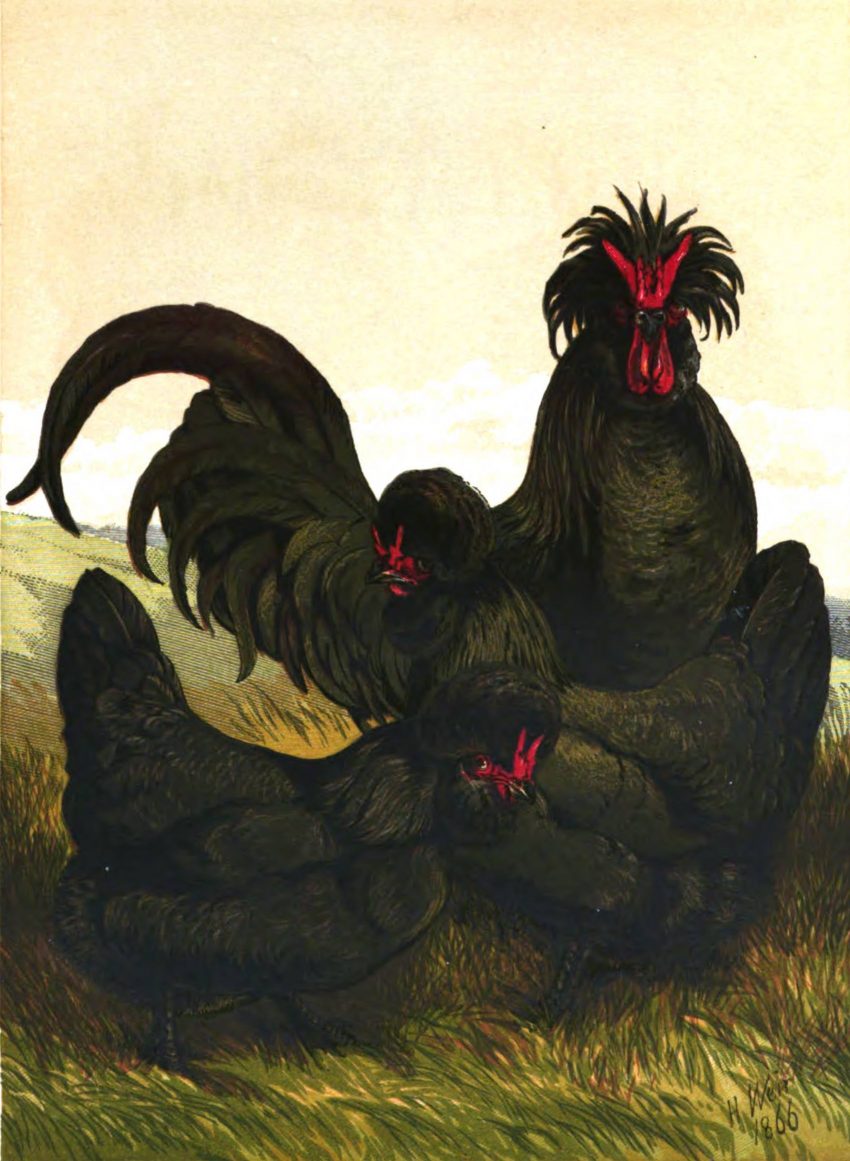 In the 1867 Poultry Book the editor / author Mr Tegetmeier discusses the French poultry industry which was far in advance of our cottage and back yard producers. The principal breed for the French table was the Crevecoeur chicken. He says:

…the celebrated Normandy table-fowls known as the Crevecoeur. Some idea of the value attached to this breed by our French neighbours, may be gained from a statement of the fact, that at the first great Agricultural Exhibition in Paris, in 1855, there were two equal sets of prizes offered for the poultry exhibited; the first for Crevecceurs, the second for all other varieties taken together.

As Crevecoeurs are essentially French fowls, it will perhaps be desirable in the first instance to give the description of them published in the work termed ” Oiseaux de Basse Cour,” by Mme. Millet Robinet, The authoress of this book, which was issued under the authority of the Minister of Agriculture, states:—

” In Normandy, especially in the neighbourhood of Crevecoeur, there is a variety of fowl which supplies Paris with a large proportion of the handsome poultry with which the markets abound,

” The hens are low on the legs, with large fleshy thighs, the wings large, and the body square; the abdomen is voluminous and pendent, especially in those which are more than a year old; they walk slowly, scratch but little, and rarely fly.

Their plumage is black, or black and white variegated : they carry on their heads a large tuft, and a small upright two-horned comb ; whilst a large cravat of feathers under the neck gives to them a matronly air.

They are very tame, ramble but little, and prefer seeking their food on the dunghill in the poultry-yard to wandering afar off.

They are somewhat later in laying, and, perhaps, lay less frequently than the common (French) fowl; but their eggs are much larger, and they continue to lay a longer time. They sit badly, and are apt to break their eggs from their great weight, which is, at least, one-third more than that of the common fowls : they are very easily fatted.