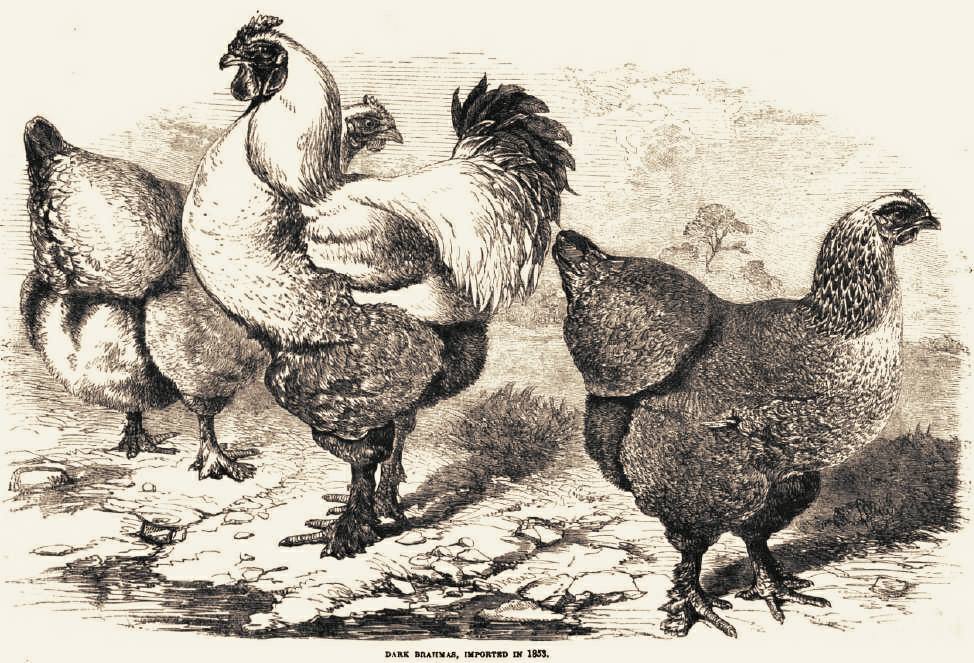 Dark Brahma Chickens – Imported in 1853 Although this does not show the colour, it clearly shows the conformation and plumage style of the Brahma.
The cockerel in the centre is, you have to admit, a magnificent chap.

There was some argument as to whether the dark and light Brahmas were the same breed or actually from different origins. Judging from these wood engravings from the 1867 edition of the Poultry Book there conformation would appear to argue against this. 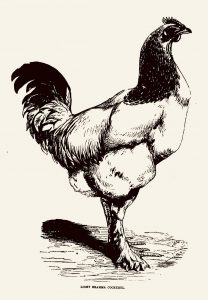 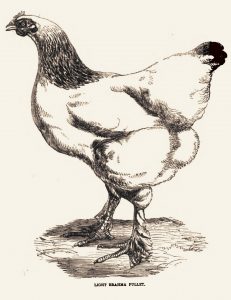 From the Poultry Book 1867 Regarding Brahma Chickens

“… if they have an unlimited range they are great ramblers, remaining out later at night than any other variety that may be in the same run;”

It is an old axiom in breeding, that if like produces like, it is a proof of purity; because where there is a cross, however remote it may be, the parents will
throw back.

We have bred a great many, and everything indicates distinctness of breed. The chickens are all hatched either black or yellow.

At the age of six weeks a change takes place,—the black get gradually grey, and look as if their feathers were covered with a cobweb; while the yellow become white, and then speckled like a silver-pencilled Hamburg chicken. At a more mature age they all become grey, some more pencilled than others.

There is no doubt they are even hardier than Cochins.

In November, often during the hard frosts and little snow we then have, chickens will do very well in an open field, without any other cover than that afforded by the rip in which the hen is placed. At daybreak they may be seen, in spite of the cold, running about in perfect health; and an amazing small number die.

They are less expensive to keep, and are quite as prolific in eggs as the Cochins.

“The only difficult point is the variety of comb—viz. the pea-comb and the single: while we give the preference to the former, therein following the judg­ment of the best of the recognized judges in America, we do not see why both may not be pure, as in Dorkings.

But there are other points in which these cocks differ from their Cochin brethren: the head, the prominent breast (almost protuberant), the carriage, and shape of the tail. Close observers will notice that not only is it more upright than in Cochins, but the feathers that would be sickles in another breed more resemble those in the tail of the black-cock, and, like them, spread outwards from the centre.

“As in the early days of the Cochins, these birds have been mated with those of other breeds, and the produce has been exhibited as pure specimens. We know many instances of it, where it has been openly admitted that they have been bred between Brahma cocks and buff hens.

Such will lead to disappointment; and no opinion can be a just one based on such an exhibition.

The Cochin-China fowl, although a great eater, must have his food provided for him, while the Brahma will go abroad to seek it.

A lady lately imported some of these birds, and after they had been in charge of the man (who had looked after Cochins for years) some days, asked his opinion.

‘ Madam,’ said he, ‘ these will get fat where the Cochins will starve.’

The Cochin-China fowl seeks its roost early, and besets the hen-house door; the Brahma always roams far from home till almost dark. We have seen them following a man at plough, and picking in the newly-turned furrows, three fields from home. We believe a similar thing was never witnessed in the others.