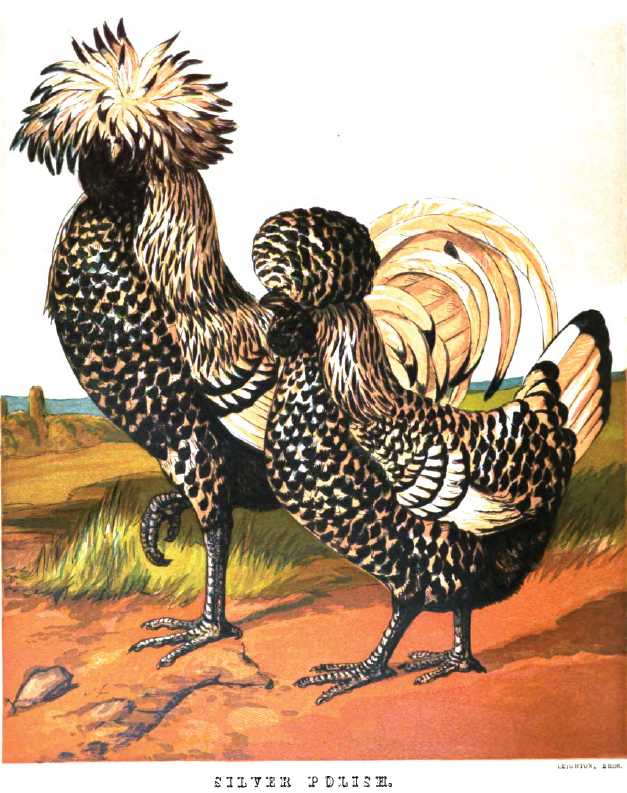 There is little doubt in my mind that this (illness) is greatly induced by the large quantity of moisture the top-knots will retain during drizzling hazy weather.

The feathers of the crests are placed in a position rather to hold than repel damp; and from retaining it for some hours, the cold and moisture combined of course superinduce disease—more particularly as regards colds in the eyes, and in the head generally.

For this reason, Polish of all kinds require shelter that is always’ available in cases of sudden rains, even more particularly than other breeds of poultry.

If, however, well provided with this accommodation, and likewise enjoying a dry warm walk, there is not any variety that I think more remunerative, so far as the production of a large number of eggs is considered; it is worthy of especial note, also, that the eggs produced are of a superior quality for the table.

A Warning When Keeping Polish Chickens

As it may possibly prevent the like misfortune to some others) who are now commencing their poultry career as amateurs, I will briefly mention a circumstance that cost me some loss at the onset of my fancy for Polish.

In those cases where the crests are fully developed, it is perfectly impossible for the birds to see any approach from behind, and, consequently, Polish are naturally very timid of coming danger, probably from feeling their inability to avoid it: it was, doubtless, from these causes that in some instances, when I suddenly caught or rather quickly picked up the birds, they have instantaneously died in my hands from apoplexy, without any real injury from external pressure.

A slight shudder and indistinct gurgling noise were the only accompaniment of their sudden decease. This disaster seemed to be particularly common among those chickens that, hitherto enjoying an unlimited wild run, had, for increased safety from thieves, been removed to close quarters.

After its unpleasant repetition (and that generally in the cases of my very best birds) I never took them into hand without first speaking to them ; and from that hour I never lost another specimen by the cause complained of.