Origin of The Frizzled Fowl 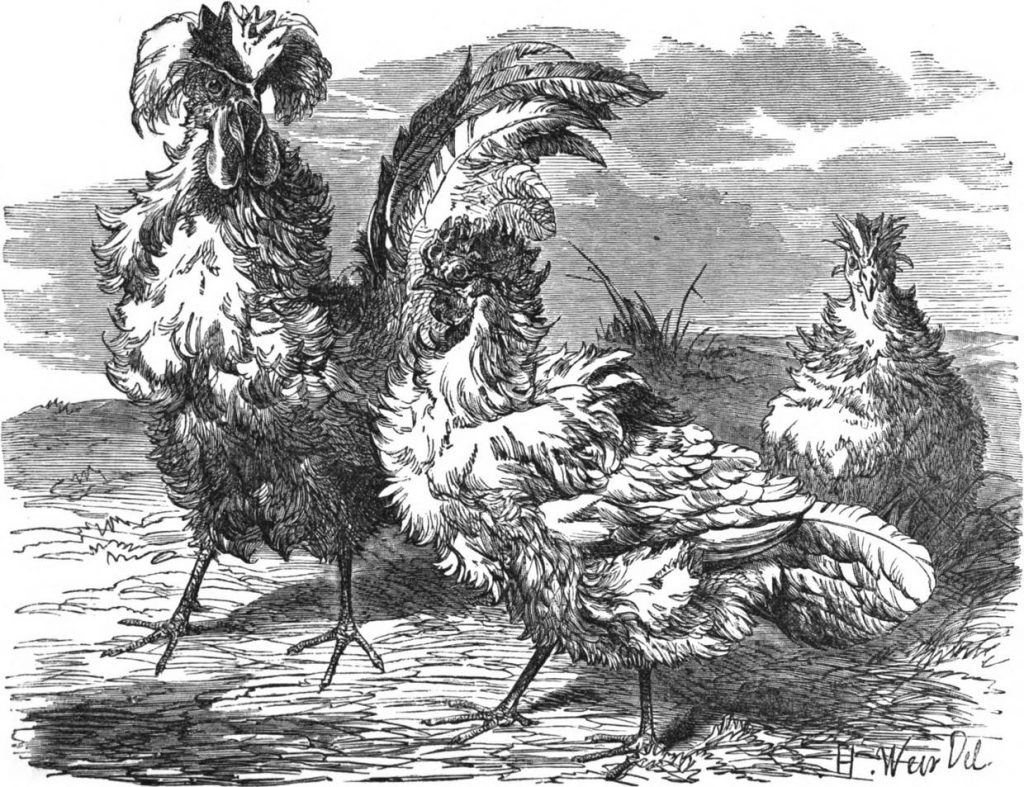 This article on the origin of the frizzled fowl is extracted from The Poultry Book of 1867. Note: The Mr C Darwin referred to is the famous Charles Darwin, author of the work that introduced the theory of evolution On the Origin of Species

Birds with feathers more or less completely recurved are not uncommon in many parts of the East. In a large collection of the domesticated birds of nearly every country in the world, formed by Mr. C. Darwin, and placed at our service, many specimens occur with recurved feathers some like Malays, with short frizzled hackles, and others with the peculiar plumage passing over the entire body.

Frizzled fowls were described by Aldrovandus in 1645, and his description and engravings were alluded to by Willoughby, who, in his ” Ornithology,” states—

The Frisland Hen or Frizzled?

” We have often seen, and ourselves also have now at Middleton, another kind or variety of hen called in English the Frisland hen, not (as I suppose) because it was first brought to us out of Frisland, but because the feathers of the body are curled or frizzled; by which epithet I believe this bird was first called, the word being afterwards, by the mistake of the vulgar, corrupted into Frisland, of like sound.

For knowing this to be an outlandish hen, they thought it could not be more fitly denominated than from its country, and thereupon imagined it to be called a Frisland hen, instead of a frizzled hen.

Nor did they want a probable argument to induce them to think it to be of a Frisland breed or original, viz. the curling of the feathers, which one would be apt to attribute to the horror of cold.

I suppose this to be the same bird which Aldrovandus hath put in the chapter of monstrous hens in the last place, whose figure, he saith, was sent him by Pompilius Tagliaferrus, of Parma, with this description:

‘ I would have you to understand that there are two things especially found in this cock worthy of admiration. The first and chief is, that the feathers of its wings have a contrary situation to those of other birds, for that side which in others is naturally under­most or inmost, in this is turned outward, so that the whole wing seems to be inverted; the other is, that the feathers of the neck are reflected towards the head, like a crest or ruff, which way the whole tail also turns up.’

Mr. E. L. Layard, writing from Ceylon, states that this fowl ” is called by the Cingalese, Caprikukullo. It is found here but rarely, and the natives say they came from Batavia. This agrees with Temminck.”

The Frizzled fowl is the Gallus crispus (Frizzled fowl) of Brisson, and the Gallus pennis revolutis (Fowl with rolled-back feathers) of Linnaeus; the Coq à plumes frisées of Temminck, who states that it is domesticated, and thrives well in Southern Asia, Java, Sumatra, and all the Philippine Islands, and that the prevailing colour of the race is white, the legs being generally smooth ; but there are many specimens variously coloured with black and brown, and some have feathered or booted legs.

The most ornamental that we have seen are those with white feathers over the entire body. In good specimens they curve back from the body, so as to give the bird an appearance of being ruffled, or of having its feathers rubbed in the wrong direction; the tail is generally ample and well sickled.

As the birds have not been bred to any particular standard, their size, the colour of the plumage and legs, and the character of the combs, vary greatly in different specimens. The engraving gives a very faithful representation of some exceedingly good specimens.

The following remarks on this variety have been kindly furnished for the present volume by Mr. Hewitt:—

” No variety of fowls can possibly present a more unique appearance than does the Frizzled fowl. All the body feathers, without exception, appear twisted out­wards and backwards—similarly to the curled feathers in the tail of a drake— exposing the down underneath to the influence of the weather; it is to this exposure that I myself attribute the fact of their being the most uncertain layers I ever met with among any variety of poultry.

After the occurrence of rain I have found that the Frizzled fowls continued in a state of dampness for several hours after the common poultry have become perfectly dry, and the results prove they are susceptible of injuries from such exposure.

Those breeders with whom I have personally conversed, all declare they do not approve of the Frizzled fowls, from their want of constitution; and from the fact that when dressed for the purposes of sale they carry so little flesh in accordance to the apparent size of the fowl itself.

I have myself tested them as mothers, but find many superior; and, when killed for table, they are of scarcely passable quality. The full-grown cocks generally weigh about five pounds, the hens nearly four.

In plumage they are mostly white; still I have seen many brown and grey specimens. They usually are of a somewhat sickly appearance, and generally, if handled, feel thin and spare. Their combs are generally single, and the wattles large.

The tails, which are of full size, have, like the flight-feathers of the wings, a broken, irregular appearance on the vane, as though they had been ruffled by passing the hand down them. I have met with many persons that have kept them for fancy sake, who regretted the experiment, as the fowls often became diseased, and were generally out of condition, although enjoying the same advantages as all the other varieties that remained in perfect health.

They are quickly prevented from laying by the occurrence of severe weather, at which time they look very forlorn and wretched; and always appear to suffer far more from exposure to cold and wet than the generality of fowls.”