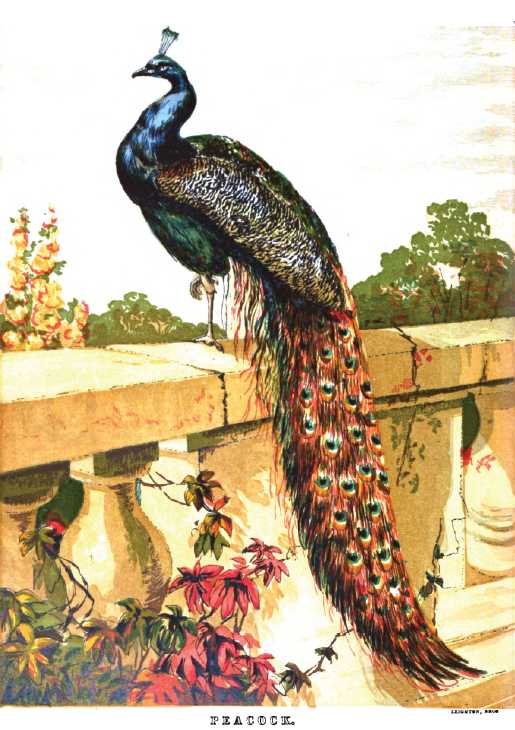 Most people refer to the peacock when talking about the species but they’re properly known as peafowl with the gloriously plumaged male being the peacock and the dowdy females the peahens.

The Poultry Book 1867 had this to say about the peafowl:

The Peafowls, which are all natives of India, China, Java, and the Philippines, form a very well marked group of birds, known to ornithologists as constituting the genus Pavo.

These fowls are distinguished from the other gallinaceous birds by having the head ornamented with an erect crest of feathers of a peculiar structure.

The space around the eye is naked; the true tail of moderate length, comprised of eighteen feathers; the feathers of the back and upper tail coverts are of great length, and beautifully ocellated.

The tarsi or shanks are long and spurred in the male.

It is usually stated that but two species are known,—the common peacock, Pavo cristatus, and the Javan species, Pavo mitticus. But Dr. Sclater has recently described, under the name of the black-winged peafowl, Pavo nigripennis, a third which seems perfectly distinct from the two former.

The common Peafowl, Pavo cristatus, has been known from the earliest periods; we are informed that the navy of Solomon brought to him every three years peacocks from Tarshish, (1 Kings x. 22.)

Peafowls were known to the Greeks, and largely bred by the Romans. The bird in its wild state is a native of the peninsula of India, the Himalayan mountains, up to a height of several thousand feet, the jungles in the salt range of the Punjaub, and the island of Ceylon.

The Peafowl in India

…It (The peafowl) inhabits the whole of India Proper, being replaced in Assam and the countries to the East by another species.

It frequents forests, and jungly places, more especially delighting in hilly and mountainous districts; and, in the more open and level country, wooded ravines and river banks are its never-failing resort.

It comes forth to the open glades and fields to feed in the morning and evening, retiring to the jungles for shelter during the heat of the day, and roosting at night on high trees.

It ascends the Neilgherry and other mountain regions in Southern India, to 6,000 feet or so of elevation, but it does not ascend the Himalayas, at all events in Sikim, beyond 2,000 feet.

In many parts of the country it is almost domesticated, entering villages and roosting on the huts; and it is venerated by the natives in many districts. Many Hindoo temples have large flocks of them; indeed, shooting it is forbidden in some Hindoo states.