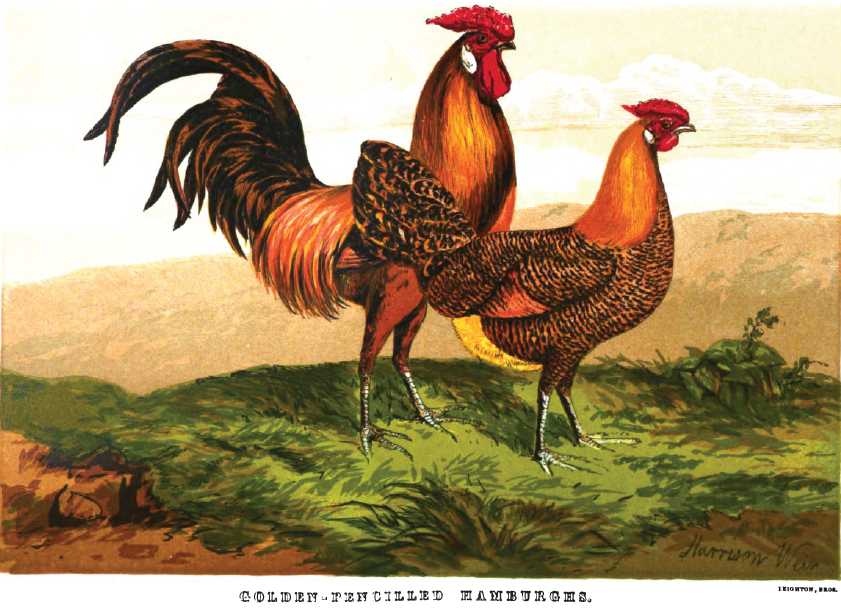 Pencilled Hamburgh chickens of both varieties are scarcely to be surpassed in beauty by any of the other denizens of the poultry yard: the slight compact form of the hens; their sprightly, active, cheerful carriage; and the contrast of their ample scarlet combs and well-defined white ear-lobes, with their neatly barred plumage, render them exceedingly ornamental.

Nor are they behind in profitable characteristics ; for being of roving habits, they range well, and provide themselves with a considerable portion of food; in fact, in many situations, their powers of flight are so much exercised as to lead them to be an annoyance to neighbouring residents.

But this, again, is not without its own special utility, for it renders their abstraction by any pilfering thief an act of very considerable difficulty; and if disturbed at night, they commence and continue such an outcry as can scarcely fail in arousing the sleeping vigilance of their owner.

As layers, Pencilled Hamburgh chickens, as may be judged from their synonym of Dutch Everlasting Layers, rank very high, although, as may be imagined from the size of the hens, the eggs are rather small.

They are non-sitters; not one in many hundred ever indicating the slightest desire to hatch. For the following excellent résumé of their economical merits, we are again under obligations to Mr. Edward Hewitt, who states:—

The Hamburghs are excellent layers, provided they have free liberty on an unrestricted grass-run; they are most impatient of confinement, particularly the Pencilled varieties, and very susceptible of disease wherever overpopulation and limited space are unfortunately combined.

They shift for themselves better than any, excepting the Game, and are not, therefore, expensive as to keeping; indeed, I believe (in comparison to the food consumed) none produce so large an amount of eggs, taking the whole year from end to end, whether we estimate by weight in the aggregate, or by numbers; their chief production, however, is during the milder months.

The flesh of Hamburghs is very superior; and they are always, as chickens, in fit condition for the spit, if only tolerably well fed, without any additional preparation. Being a small-boned fowl, they proved, when carved, to be much more fleshy than might be imagined at first-sight.