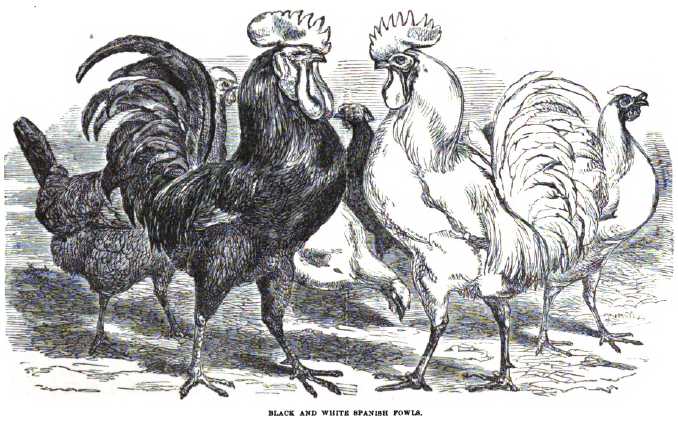 The geographical names by which the majority of the different breeds of our domestic poultry are at present known to us are unquestionably erroneous.

Cochins were unknown in Cochin China until introduced into that country from Shanghae by the English. The so-called Polands are unknown in Poland. Spangled Hamburghs are certainly of English origin; and the breed known as Brahmas are unknown on the banks of the river Brahmapootra.

But with Spanish the case appears somewhat different; all along the Mediterranean, from Gibraltar to Syria, the countries that border on that vast inland sea, with its numerous islands, abound with fowls that bear so close a degree of resemblance to the Spanish race as may warrant our assigning them to one common stock.

The employment of the names used to indicate some of the varieties of this breed tend to point their common origin : thus we have Andalusians, Anconas, and Minorcas, the names of which point to a Mediterranean origin.

The quantity of poultry kept in these countries greatly exceeds anything we witness in England, even since public attention has been more generally given to this branch of agricultural economy.

Purity of breed, however, is but little esteemed, and the miscellaneous collection of mongrels described by every Mediterranean traveller who has touched on this subject will probably long remain in the same heterogeneous state as it is at present.

Nevertheless, with those who have examined with any care the natural history of this section of gallinaceous birds, little hesitation would be felt as to the extreme probability of a common descent.

These breeds certainly are not likely to have had their origin in the more northern parts of the European Continent; since those who now keep them know to their cost how apt they are to suffer in their combs and the fleshy excrescence on the face in weather which other poultry braves with impunity. Their prolonged and excessive moult is also indicative of their original habitation having been under the mild temperature of those southern lands.

The Spanish fowl throughout the wide range of the Mediterranean coasts is always found in a state more or less degenerate, in comparison with the beautiful birds that are now seen at our exhibitions.

So little attention, indeed, has been given to preserve the breed pure in any part of what we may term its native districts, that the specimens recently imported from Spain and the adjacent countries have always been of a very indifferent description. 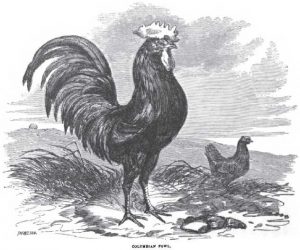 Unfortunately they’re not mentioned in the 1853 edition of the Poultry Book and my digital copy of the 1867 edition that discusses them is missing pages 122 & 123 which cover the Colombian Chickens.

Happily the engraving shown here of Colombian Chickens did get scanned.