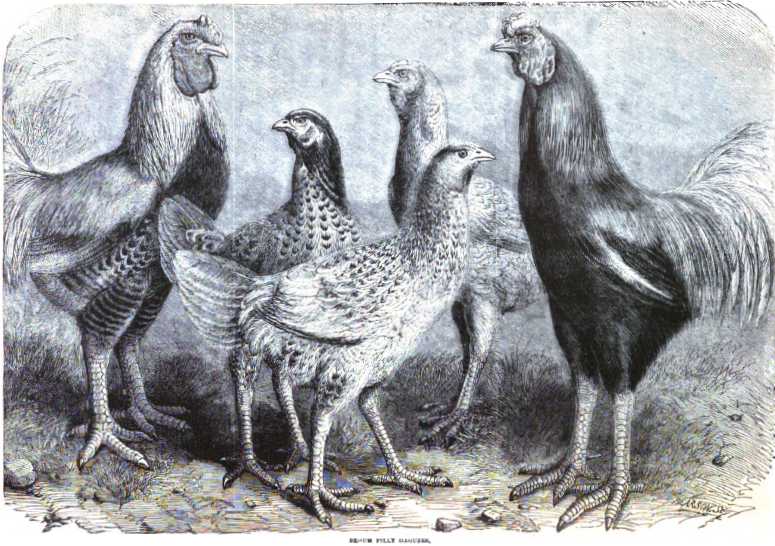 The Domestic Fowls of India

In the chapter on the Malay fowls, we have alluded to the general characters of the domesticated Indian varieties, some of which are of large size.

There is, however, no evidence whatever of the existence of any wild type approaching the fowl termed by Temminck Gallus giganteus.

The theory that every domesticated variety must have had its wild original, has given rise to the most erroneous suppositions, which, being repeated by writer after writer, have at last been accepted as facts, and statements have been made and implicitly believed, that the Rumpless, the Silk fowls, the Malays, and even the Crested breeds, have all had their wild progenitors roaming at large in the Eastern jungles.

In the proceedings of the Zoological Society for 1832, Colonel Sykes described, under the name of the Kulm fowl, a large variety, domesticated in the Deccan; this has been erroneously regarded as descended from, or identical with, the supposed wild Gallus giganteus, of whose existence there is no evidence whatever.

Many of the Indian breeds are of what may be termed the Malayan type, and characterized by great height, long snaky necks with short hackle feathers, scanty tail coverts, close firm plumage, and stout elongated shanks.

Some years since, a breed of this kind was exhibited at our poultry shows under the title of Rangoon fowls, and in the Illustrated London News of April, 1865, there was figured a group of Indian fowls, with the name of Begum Pilly Gaguzes.

For the liberty of reproducing this engraving (of Begum Pilly Gaguzes) – we are indebted to the courtesy of the proprietors of that journal. The birds it portrays are good examples of the Malayan type, but are neither so close feathered, so tall, or so weighty as the best examples of Malays exhibited at our ordinary shows.

The height of the cock was stated to be two feet six inches, and the weight of young birds when seven or eight months old, was given as eight pounds each.

In the account of these birds that accompanied the engraving, it was stated that they were introduced for the purpose of crossing with Dorkings, and thus improving our common breeds, but for this purpose a good Brahma or short-legged Cochin would be far superior.

The engraving, however, is of much interest as illustrating a type of fowl common over a large portion of the south of Asia.