The girls are currently laying 3 eggs a day between the two of them! We check the house both morning and night for eggs in order to avoid them going broody (they seem to feel an egg left for more than 12 hours is good enough reason to sit!)  so we know they are freshly laid each day, but for four days in a row now one or both girls has been in overdrive. 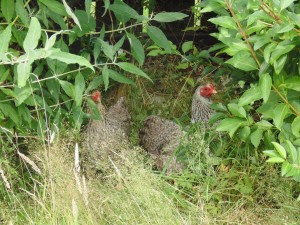 Now, some may think this is great, 3 eggs a day from just the two hens. However, long term this isn’t such a good thing. Not only do they lose their mineral stores faster when laying more frequently than their natural 25 hour cycle, but they also only lay a finite number of eggs so overclocking now usually leads to them stopping laying shorter in their lifespan.

While laying so many it is a good idea to add a calcium rich peck as well as their usual layers pellets, especially if the flock aren’t kept free range. Our two girls have full run of the garden so plenty of greens, but when I’ve kept in a more close system I’ve also always added some freshly chopped cabbage or similar for them each day. These two girls are rather spoiled with all the garden they get to play in though as treats are often rejected when offered! My old girls loved a fresh tomato or strawberrry, but these two took one peck and marched off to their favourite bush again without a backwards glance! 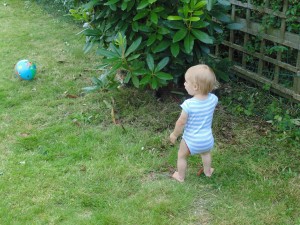 Gabriel now loves playing in the garden with both the cats and chickens. They however don’t seem to share his enthusiasm! Now he can move with speed the cats have learnt to keep at least 5 foot away at all times an no more lazing around in the sun unless hidden when he is around! Buffy thought she was safe beneath this bush, but not for long…..