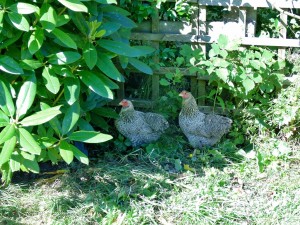 After a week of the girls jumping the fencing every day, having a lovely scratch around the garden, then waiting at the gate to go back in to bed, we decided to just let them fully free range in the garden. Thankfully there is a lot of space for them and little that can be easily hen damaged, so free ranging isn’t going to cause damage to lawn/borders.

At the moment they are hiding from the heat of the sun under the rhubarb patch and thankfully showing little interest in the two areas of the garden we need to now hen proof to stop them escaping. The front gate could easily be walked through by a hen so we’ll be putting a mesh cover over it to stop them attempting a “Why did the chicken cross the road?” gag, and the omlet fencing is going to be ran in front of the back hedge to stop them nipping into the house behind’s garden. 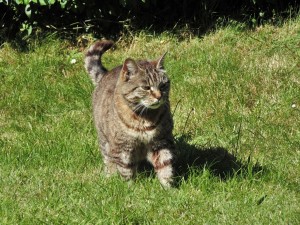 Despite their previous tree perching they seem quite happy at night to go back in their coop and have actually been easier to get to bed than when they were in the moveable run! I guess the main thing now to keep an eye on is that they are laying in the nest box, as my old free rangers used to lay anywhere but… The cats really don’t mind the chooks intruding on the whole of the garden – they are just happy that unlike the old barn girls they don’t beat them up.

Gabriel is finding the chooks being out in his garden very entertaining. As well as scampering around the garden after the cats he is now chasing poor Spitfire and Lightening around and screeching with glee (his current favourite noise!). I love the fact that as he grows up he will know where his food comes from. Last week he had a wonderful time with his grandad unearthing potatoes and then he thoroughly enjoying eating them for his dinner. A stolen fresh tomato is also eaten with far more excitement than anything from a supermarket.