Poultry Blog Home › My Chicken Diary › We have a Layer!

We have a Layer! 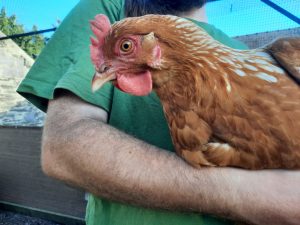 The time has arrived and on opening the coop we found our first egg. Unfortunately though they had laid it under the perch and it got broken in the morning scramble to leave the coop. We worked out that it was Buff that had started laying – both her and Princess Lay-ah were contenders as they have both really reddened up this past month.

I took a few wooden eggs from Gabriel’s play kitchen and popped them in the nest box. Buff went in, moved them around a bit, then the next morning we found her perfect little egg alongside them. We’ll keep the wooden eggs out there for the next 8 weeks or so as all come into lay, just so they all get the idea of where to sit.

Little John is well behind the other girls in terms of getting close to laying. This is common with Brahmas as they also take a lot longer to reach their full size. I suspect we may even have to wait until next Spring to see an egg from her. I’m hopeful that we will get an egg from Princess Lay-ah any day now and the two Orpington girls don’t look to be too far behind either. 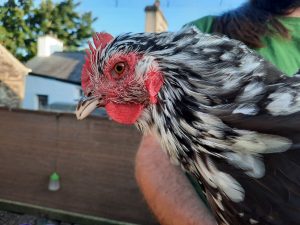 When will my chickens start laying?

When my newsletter goes out I often get asked “when will my chickens start laying?” The answer to this varies! It can depend on breed, time of year, and even feed can have an effect.

Hybrid chickens will start laying around 18-22 weeks usually. If you want a chicken that will be quick to lay and prolific in their laying hybrids are your best bet. Certain hybrids will lay sooner than others – the ISA Brown for example is usually in lay by 18-20 weeks of age and in the first year you can expect nearly daily eggs from them. This does have a downside to it though as well. Chickens only have a limited amount of eggs they can lay in their lifetime – usually around 600-800 – and the more prolific in the early years, the younger they will stop laying.

Pure breeds tend to come into lay later. Brahmas being one of the oldest to start laying, anything from 7 months/28 weeks onwards, and Sussex or Welsummers tending to be sooner at around 5-6 months/22-24 weeks onwards. They will also tend towards laying less eggs, with more daily breaks, but they will continue for longer and tend to live a longer life too.

A Spring hatched chicken will be likely to come into lay before the Autumn whereas a Summer hatchling you will likely be waiting until the following Spring to get an egg from. Another key factor is making sure you move the flock to a decent layers feed at around 16 weeks old. This helps to make sure they get everything their body needs for laying, along with plenty of greens (if not free ranging) and oyster shell.

How will I know my chickens are about to lay?

The question that always follows up the “when” is how to identify a laying hen, or hen close to laying. One of the easiest ways for me to show you is a photo comparison. This is Princess Lay-Ah at 16 weeks old and again at 21 weeks old. As you can see the difference in her lobes, wattles, and comb is very noticeable. As a hen comes into lay all three redden and grow. 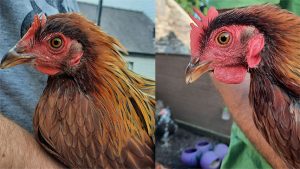 You will also find the hens will start squatting for you. This means they crouch down towards the ground if you put your hand over them instead of the more flighty running off that will have preceded it. Hens squat for cockerels as they reach sexual maturity and they will also do this for you their owner more often than not. Buff, for example, started squatting for us about a week before she laid her first egg. Princess Lay-ah has started squatting this week so we expect her first egg any day now. 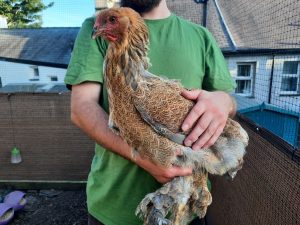 Will my new flock lay through Winter?

There are of course options such as artificial lighting should you wish to extend laying, but for me I just choose to store as many eggs as I can in the Summer to see us through any Winter slow-down. Keeping the flock laying through Winter makes those limited egg reserves run out sooner, shortening their laying life and general lifespan. We do keep our laying girls as pets as much as food production though, so really everyone needs to find the balance that works best for them and their flock on this one.

Leave a Comment Here on We have a Layer!