Well, the time came last weekend and the three big Light Sussex boys were awakening us at 5am with a rather loud cock-a-doodle-doo. One of them sounded more like he was being strangled each morning; somewhat akin to a teenage boy and their voice breaking in. It meant it was time to cull. We decided at the time that Kelloggs, the Welsummer boy, could have a reprieve, This was partly because Gary was very attached to him as he was a very fine rooster, but also because he was yet to crow and weighed only just over 1kg so culled he would barely be worth plucking for the stock pot.

The culling was straight forward and within an hour or so we had three freezer ready chickens weighing in at 1.310kg, 1.427kg, and 1.487kg. Not bad for a dual-purpose breed. If we had them up on the smallholding we’d have probably waited another 2-4 weeks to cull, to allow them to fatten up a bit further, but these guys were in the garden flock and I knew the neighbours behind would not be happy with the morning chorus.

Hens in the Hatch

We now know that our female:male ratio was far higher than we first thought. It turns out all three of the Spangled/Mottled Sussex are female. They are turning into very beautiful birds too as their full plummage has come through the past few weeks. We also realised that Buff is not in fact a Buff Orpington as thought, but a Buff Sussex cross (a cockerel jumping the fencing we suspect!) I was getting very confused when after her juvenile moult she got different coloured neck feathering. A quick message to the breeder she came from resolved my confusion thankfully. So we have the following girls in our flock now:

Darth Vader – Spangled Orpington (with darker/blacker colouring) – Gabe was adamant we had to include Darth Vader, but we couldn’t think of an appropriate hen-pun for her!

The two girls who went up to the smallholding have settled in well now and are called Welly (Welsummer) and Boots (Spangled Orpington).

Now, that left us with one cockerel along with the girls. The handsome Kelloggs. When we culled the Light Sussex boys he was yet to crow, but alas two mornings after we heard the first attempts of his own cock-a-doodle-doo. I wasn’t keen on moving him up to the Smallholding, where crowing and neighbours are not a concern, for two reasons.

I had hoped he’d forgo crowing a few more weeks meaning the darker mornings allowed for us to grow him on a bit before culling. I weighed him again and live weight he was still only 1.2kg so we were looking at such a low dressed weight he’d only make it to the stock pot. However he then began crowing constantly. I mean every 2 minutes he was off and I could see our neighbours at the back glaring over the fence at him. Sadly we had to make the quick decision to cull and dress for the stock pot.

I always have a plan for cockerels that hatch and nine times out of ten they are destined for the freezer, but it still is bittersweet carrying out the deed. At least we know they have a far longer life than commercial broilers, and a far happier one at that. 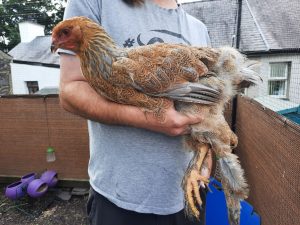 Now Little John has always been the tiniest of the flock. A day younger than the others in the flock accounted for some of the size difference in the early days, but as the weeks drew on she was swamped by the rest of the flock. Of course the Light Sussex were all males and as such bound to be larger, Kelloggs too. Even Buff and Princess Lay-a were substantially bigger though and I was starting to worry maybe there was something wrong. That worry has soon gone the past two weeks.

As the rest of the flock slow down on their growth a little, Little John has just kept on going. At the start of the week I went out to discuss with Kelloggs his morning song and realised she was as big as he was. Bigger now than the two Spangled Orpington girls too who always seemed so huge next to her.

Brahmas are a slow growing breed and many breeders suggest you won’t see their full stature until two years of age. They are also such a docile breed that they are perfect gentle giants in a back garden flock. We’re lucky that all the girls are very docile – Princess Lay-a is a little flighty still but that should change when she lays – and they already have a top-hen in Buff who rules the roost!

As Little John’s full feathering has come through she has become even more beautiful too. With golden partridge feathering, an under-tone of blue, and then her fluffy little feet – she is certainly my favourite of the flock. We may have not had the best season of hatching and rearing, but those girls that we have raised are all beautiful and fine examples of their breeds.

One comment on “Cock-a-doodle-doo! 16 Weeks Old and Reaching Maturity”