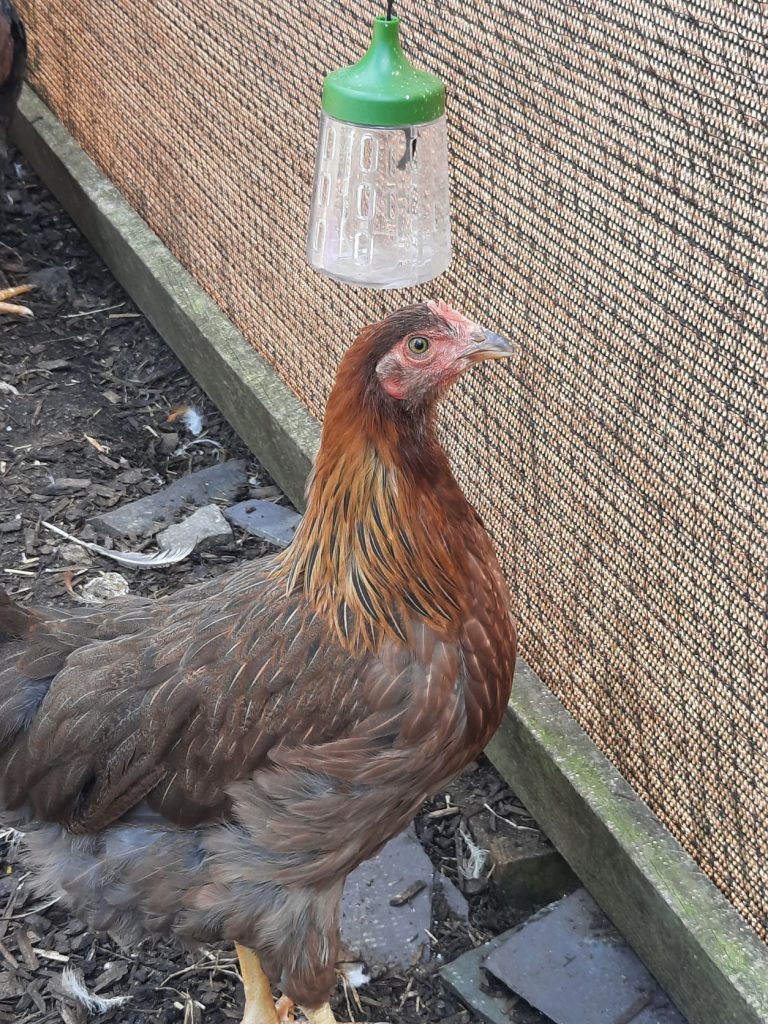 The chicks are now 10 weeks old and they have started going through their juvenile moult. This is when their baby feathers are replaced fully with adult feathering. So, at the end of this the boys should have the tail feathers to match their magnificent combs. They will likely also come out of it starting to test their vocals with crowing. The entire run is a sea of little white feathers, implying the three Light Sussex boys are the main moulters this week. The juvenile moult tends to occur between 8-12 weeks of age and lasts around 2-3 weeks. After this moult is the prefect time to fully sex your flock – although some breeds are more difficult than others, and silkies need their own special instruction manual! 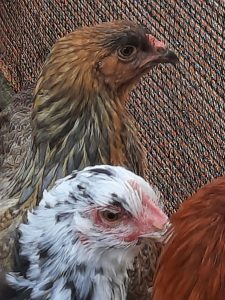 We keep flipping back and forth with the three Spangled Orpingtons on whether they are boys or girls. One #1 has hardly any comb at all. However, they are the biggest of the three! I’d say the first one I’m 99% sure is female, it is just her size that is throwing me. The second one #2 has a red comb and face. Their comb though is the smallest – smaller than that of our known females in the flock. The third #3 has a little reddening to the comb, but it is still very small compared to the Light Sussex boys and Kelloggs the Welsummer boy.

Whilst the three Light Sussex boys and Kelloggs often chest bump these three never seem to get involved, just like the known girls in the flock. I’m hoping within the next week or so we’ll know for sure either way as Gabe is desperate now to name all the girls. As you may be able to tell the Welsummer boy has so much charm he may have saved himself from the pot after Gary named him last week.

You can see in the picture the comb of the lightest feathering Spangled Orpington is as small as Little John’s. Plus red wattles have not developed at all. There is also no sign of masculine plummage coming in – Kelloggs is now in full glory and the Light Sussex boys all have male tail feathering coming through. I think this Spangled Orpington pictured also has some frizzle feathering showing too. I’m really hoping they are a girl.

The known girls have so far been given the names Little John (our Brahma girl), Buff (the Buff Orpington, I know not very imaginative!), Hen-Solo and Princess Lay-er (the two Welsummer girls), plus Kelloggs the cockerel. As soon as we are sure on the other Orpingtons they too (the girls) will be named by Gabriel. I think they are likely to all be named after Lego Ninjago characters – the joy of letting an 8 year old name the flock!

Two of the Light Sussex Boys

Two of the girls will be heading over to the smallholding this week. One of the Welsummers and the Spangled Orpington that we are 99% sure is a girl. Since they will have an un-covered run there we will also need to wing clip to stop them escaping. The Welsummer in particular I expect will be trouble for this as her light body weight means even wing clipped she may manage to escape. I tend to find this juvenile stage to be the most flighty and prone to escape due to their lower body weight and more skitty personalities until they come into lay.

When the two youngsters move in with the older flock they will be nearly the same size – in fact the Spangled Orpington may be a little larger – even though they are so young still as they are both pure breeds with bigger grown weight and size than the hybrid ex-farm girls and Charlie Chook. Hopefully integration should be smooth as the older girls are all very chilled and the youngsters should slip into the current pecking order with few problems.

Culling of the Cockerels

We haven’t decided just when the known boys will be culled yet. The three Light Sussex and Kelloggs being our only certain males at the moment. Kelloggs is very docile, gentle with the rest of the flock, and gentle with us too. The Light Sussex are very different in their body language all ready. The biggest of the three is very dominant and has started hackles raising when we enter the run as well. At times we have caught him attacking Kelloggs, who at the moment will just run and hide from this. I weighed him (the biggest Sussex) the other day at 1.95kg and since dressed weight (once culled and prepped for the oven) tends to be around 70-75% that would make him around 1.3-1.5kg dressed – a lot bigger than I expected at this age.

I’d like to give the three we plan to cull another 2-3 weeks, but any more signs of aggression and we won’t hesitate to dispatch. We’ll be letting them have afternoon corn starting tomorrow and although on the lower weight end a dressed weight of over 1.3kg is great for a young (under 16 week) dual-purpose bird. If after big weights then meat bird breeds are needed really, but I prefer to slow-grow and watch them enjoy scratching about in the run and on the grass for longer.