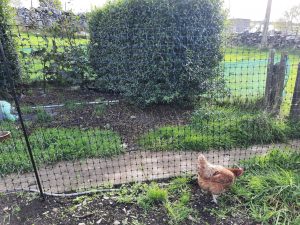 Omlet Fencing with Charlie Chook Inside Scratching Around

Over on the smallholding we’re tidying up for the end of season and getting in the cold-sensitive crops. Unfortunately almost as soon as we have cleared a bed the chickweed starts to take over again. It won’t be long until the colder weather also puts a stop to the pesky weed. Yes, I know some people choose to cultivate it, not us though, and until then we bring in the chickens.

Both the back garden flock and the smallholding flock have permanent runs to keep them safe from foxes. Sometimes though movable fencing comes in very useful. By setting up fencing in areas we want the chickens to turn over we can control the weeds as well as controlling their damage. Since if the girls get into the bed with the brassicas it won’t take them long to demolish them too!

For the past eight years we have made use of the moveable Omlet Fencing and last month I noticed they had a new version of the fencing on their website. After eight years of use the original fencing is still actually useable – showing the quality of the product – but I also jumped at the chance to try out their version #2. This is in part because when we move house next month the new garden set up will allow for a permanent run and attached extra run, something the Omlet Fencing would be perfect for. This also means we still have a set for rotating the flock around on the smallholding as well. 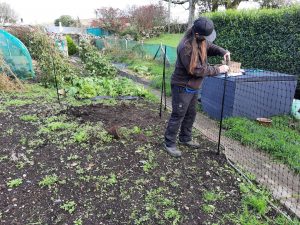 We needed to clear off a large area of the walled veg garden on the smallholding so it seemed the perfect time to get the new fencing set up. I set Gary on the task and within an hour he had the whole set up ready. It is very simple to erect. The instructions are detailed, the poles just slot together and can be adjusted for height.

The fencing kits come in different lengths (12m up to 42m) depending on how big an area you want to use it in. There are even reflective badges to put at the gate section so you don’t accidentally walk into the fencing at dusk when you come to lock up the flock! All of these small improvements show that Omlet have listened to feedback on this product, even hole sizing has improved (more on that later.)

The girls were quickly scratching around the area clearing up the chickweed in their new run. With movable runs such as the Omlet fencing you need to make sure to leave space for the guy ropes which help to keep tension in the set-up, but other than that the fencing can be adjusted to any size area you need. They even have a wall and fence attachment kit too. We’ve set up at angles before and around corners to protect veg beds and to allow the girls space to scratch around. 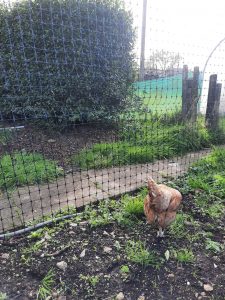 Although not predator proof – there are movable electric fencing kits out there should you need this – the Omlet fence is great for keeping the flock confined. At 1.25m high it will stop most chickens flying out. For those light or more persistent girls a quick wing clip will keep them contained.

I was really pleased to see that in the new version the holes are all the same size of 5cm square. The original version had larger holes at the top which we soon learnt our small bantams could squeeze through. Then when we got Luna as a kitten she too would hop through the fencing to go in and out of the poultry run. This was fine until she grew too big and one day got herself stuck! So for those with bantam flocks or stupid cats the new version is a big improvement.

Protecting the Ground for Chickens

Obviously movable fencing also works well for stopping poultry destroying just one area. It allows you to move them daily and to keep the lawn as grass not mud in the Winter months. When we had a small garden we used to move the Omlet Fencing around every other day so they never damaged one patch of grass. The gate means you can always access the run easily. I’ve tested out a couple of different runs in the past, but none are as good. Often they don’t have a door set into the fencing and this makes a big difference to ease of use.

We’ve written more about pasture and ground rotation John’s article on Paddock and Pasture Rotation for Free Range Poultry. In that article you can see the older version #1 Omlet fence in the background with our bantam girls that truly put it to the test. 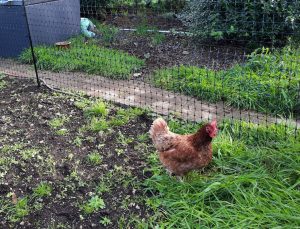 OR! Using Chickens to Clear the Ground

Chickens are also wonderful for clearing out overgrown areas as mentioned above. If you think how fast they can kill off a small grassed area you’ll realise the potential for using them as free labour. We find setting up the run and letting them out into it for just three or four days is often enough for them to clear off chickweed or other weeds. We then move them onto new ground. It also adds in extra nutrients from their poop so free manure.

Since we also have the Omlet Eglu Cube this is able to be rolled around with the fencing. A coop on wheels really is something worth investing in for a movable set up. Especially one that is as easy to use and clean as the Eglu or Eglu Go for small flocks.

As always Omlet have managed to hit the mark and improve on version #1 in terms of ease to set-up and making it useable whatever you flock size. We’re very impressed and have no doubt it will get many years of use alongside our original Omlet fencing.

If you haven’t signed up for the Poultry Pages Newsletter now is a good time to do so. The newsletter is full of tips to help chicken keepers both old and new.

We’ve also been given a voucher code from Omlet which will give you 10% off all purchase. Don’t forget Omlet stock more than just poultry equipment! The code is AUT10AG and can be used on their UK, IE, US, and AUS sites!