Don’t worry, we’ve not sent our ladies up on spaceship to Mars! The net’s a wonderful place – you start off looking at automatic door openers and end up back in history watching a video of a chicken on the Mir space station.

Keeping Chickens in the Future

I read a lot of science fiction and am a bit of a Trekkie so when I was looking at Omlet’s page whilst writing my review of the new Omlet Autodoor and came across these photos of the future of chicken keeping I was surprised to say the least.

It’s pretty obvious that Omlet are Trekkies as well. The uniform convention is yellow for command, blue for science and medical with red for engineering and security in the original 1960s series and they’ve followed that. In the Next Generation series colours changed but I suppose I’d better stick to the chickens.

Fans of the Netflix remake of Lost in Space will know of Debbie who is rescued from the crash and becomes the beloved pet of one of the astronauts. 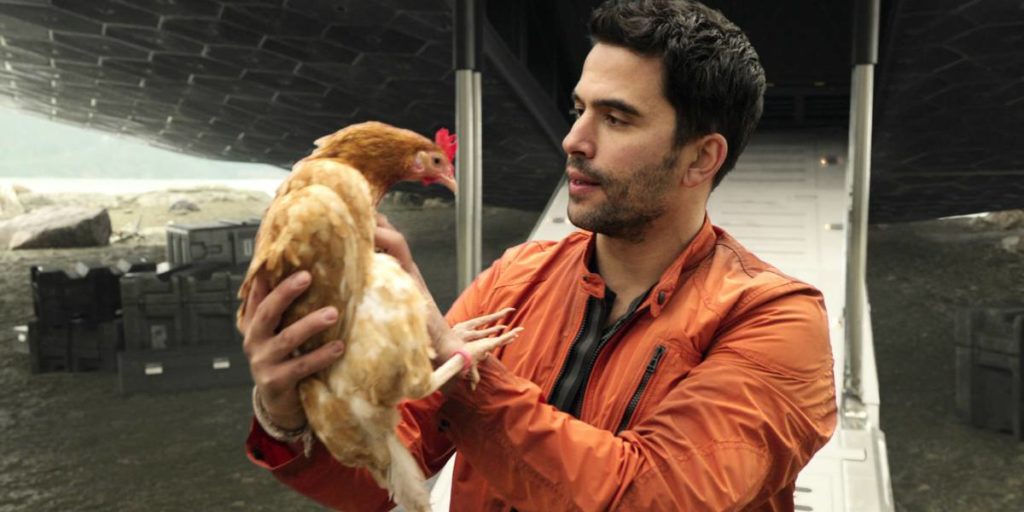 Debbie the Chicken Lost in Space – from Netflix

History of Hens in Space

There’s actually some history of chickens in space. It’s actually serious stuff, chickens could effectively and efficiently utilise waste and surplus food into tasty, protein-rich eggs. If we do get to Mars and set up a base there, it’s a good bet they’ll want to build an eco-system for growing under the domes. Don’t forget, chickens make wonderful fertiliser as well as eggs each day.

The Americans undertook experiments with quail and chickens. The experiment with chickens was hatching eggs in zero gravity. The original experiment – Chix in Space – was lost in the 1986 space shuttle Challenger disaster but it went up some 3 years later.

They discovered hatching eggs in micro gravity was not easy and chicks were born deformed. Not really that surprising when you consider how the embryo in the egg develops. The mother hen turns the eggs but they’re still in gravity.

I found a video of a hen flying on the Mir space station but I can’t find any more information. The poor hen doesn’t seem too happy to say the least.

Finally on Space Hens. Now we’ve always thought hens evolved from the dinosaurs but did they? Perhaps they arrived on Earth from another world as this video from Idaho would suggest! It began with the landing of a craft from another galaxy… The Invaders!