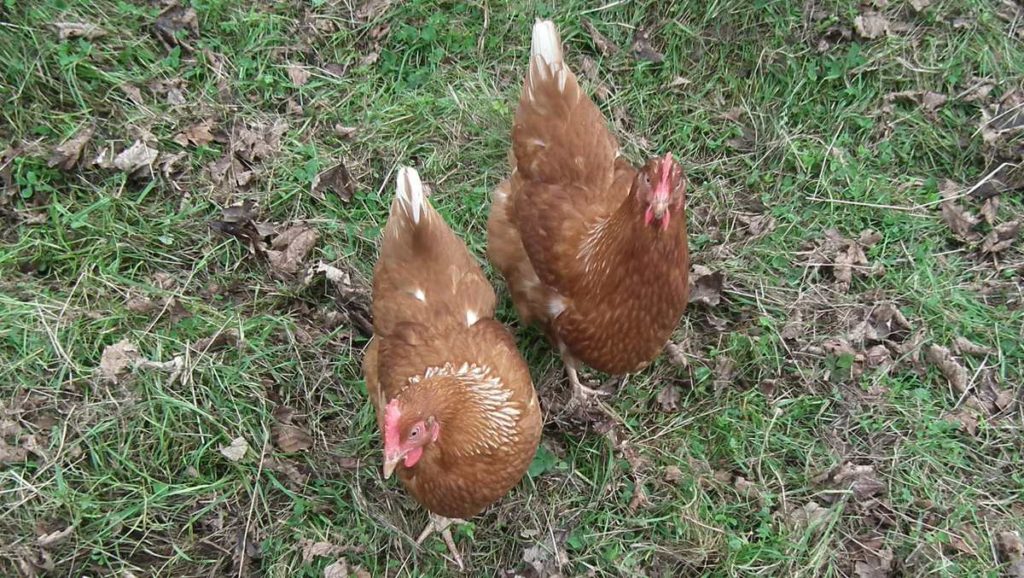 What goes up, must come down and what goes in, comes out of the other end. Chickens do seem to make an awful lot of muck. When they’re roaming around it’s not a problem, it’s just a really good fertiliser being spread about.

There was a time when few farmers kept poultry alone. Often the birds were run on pasture under fruit orchards. The hens would scratch about under the trees, opening up the grass and gobbling down insect pests. This would contribute to their diet and improve the quality of the fruit crop by reducing the number of pests that would otherwise attack the fruit.

The other major benefit was their droppings. These of course added to the fertility of the orchard. The grass would be thick and lush, free of moss and thatch despite the shading effect of the trees. Those old-time farmers used to reckon half the value of poultry was in the manure. 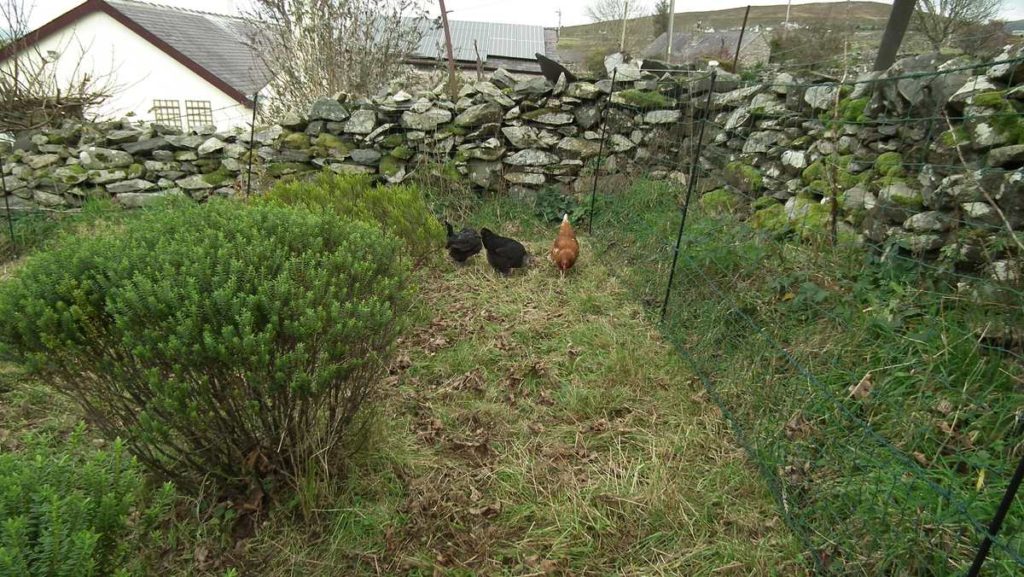 The Girls Roaming the Main Run.

Now in the main run, the droppings are not a problem. They roam around in about 20 square metres, that’s 4 square metres per hen. The grass is growing slowly now but they’re on it less with the short days. As the days lengthen again the growth rate will increase, fuelled by the chicken fertiliser.

In the secure fox-proof run the situation is different. They’ve over a square metre each but that’s not enough to keep grass in condition when they’re on it a lot. Even when they’ve access to the main run, they come into the small run to eat and they all hang around in there as it gets towards dusk. 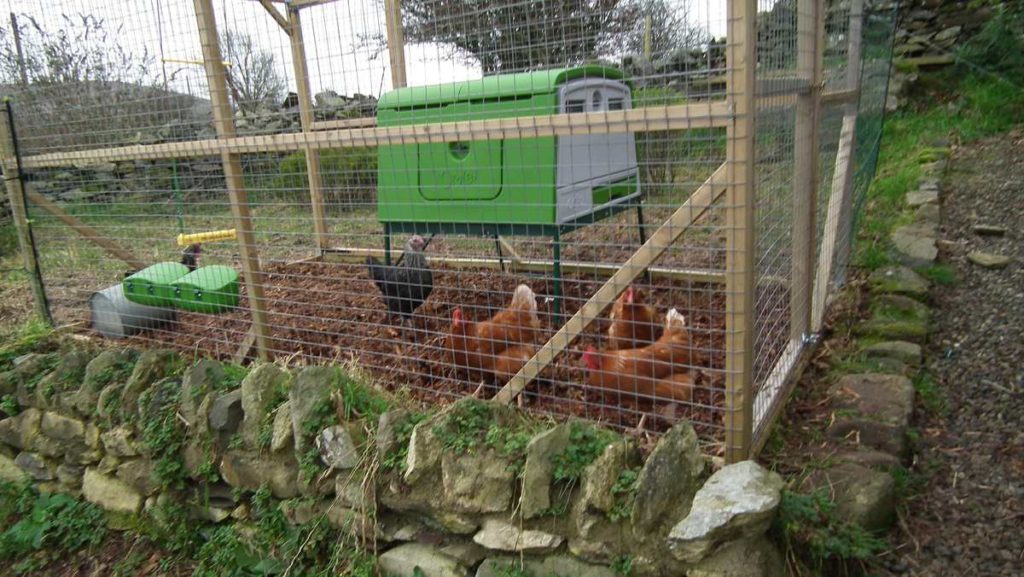 Add in us tramping in and out and it’s getting to be a mucky, muddy mess. Not ideal!

So I’ve spread a load of bark peelings over inside the secure run. The hens seem to rather like them. They’re scratching about and kicking them around – great chickeny fun. The peelings are laid about 2” thick. 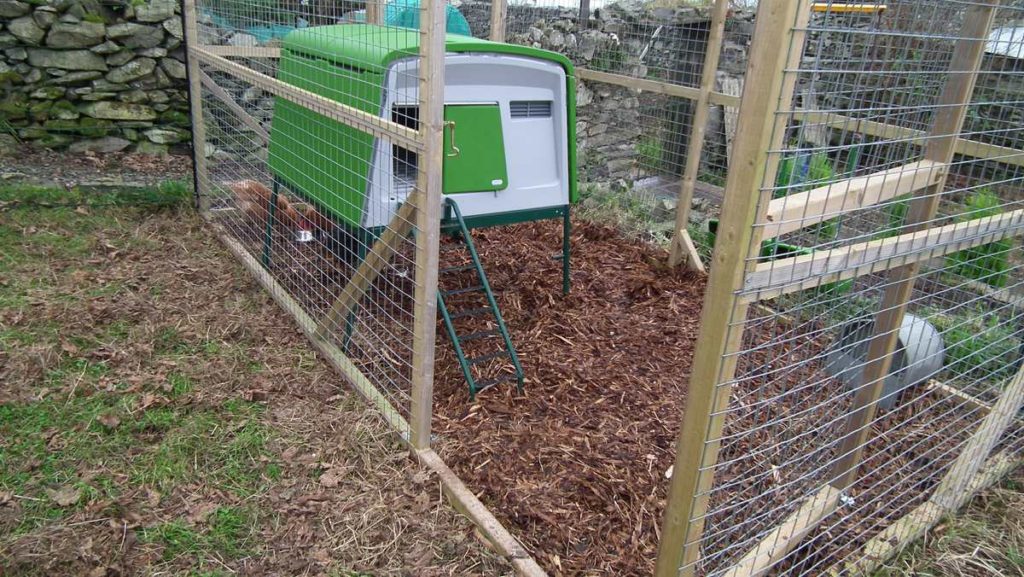 Of course the bark peelings will rot down over time and that process will be hastened by the chicken manure. Not a problem – that’s a benefit. I can rake it out as need be and it will go great on the compost heap.

We get the bark peelings from a local sawmill at very little cost, I think it costs less than a pound to cover the secure run and, as I said, it all becomes lovely compost.

Extra Benefit from the run

I know from using bark peelings as path material that they add a lot of humus to the soil below them when they rot down. This additional humus encourages worms and so, with a little luck, the hens will start finding treats in the form of juicy worms appearing next spring.

From the droppings tray

Home chicken keepers quickly discover that hens produce 70% of their droppings at night as the day’s food is processed through their guts whilst they’re roosting. Even with just two or three birds, that soon builds up to a fair amount of manure.

The relatively small amount of droppings produce in the day being spread over an area are great as a fertiliser. Putting a week’s worth of night droppings directly onto plants will scorch the roots and actually kill them.

So what to do with all that chicken poo?

The only plant I know of that will tolerate concentrated fresh chicken manure as a fertiliser is comfrey. It’s just too strong for all else. So what to do with all that poo? (Sorry, I couldn’t resist the rhyme!)

Simples! – as the meerkat said. Compost it. Chicken manure is a perfect activator for compost heaps.