As many chicken keepers and enthusiasts will know this year marks the implementation of the ban throughout the EU on barren battery cages. In 1999 the EU agreed a Directive on Laying Hens (1999/74/EC) that resulted in the banning of the most inhumane of these systems, the barren battery cage. The EU allowed producers a 12 year phase-out period, bringing the ban into effect on 1 January 2012. There has been a lot of press over recent years about the appalling conditions in which hens are kept for egg production are and recently a lot of commentary on how many EU states and their farmers are failing to comply with the ban.

Unfortunately, despite having had 12 years to get up to speed up to 30 of our UK farmers and our government who should have worked with them in enforcing this ban have failed to implement and are dragging their feet along in silence hoping the media won’t catch up with them.

Barren cages offer birds little over an A4 sheet of paper in terms of living space. They are kept without stimulation and on metal sheeting for their short lives – they are “spent” by 90 weeks of age but that is a very long life to be kept in such harsh conditions! The conditions lead to boredom, feather pecking, brittle bones, prolapse and a generally very unhappy and unnatural life for those hens in the system. The chickens are unable to exhibit their natural instincts – roosting, flock activity, pecking and scratching in the earth, flying and dust bathing – and once they are spent only a very small percentage are lucky enough to be rescued, most are sent for slaughter after their short and harsh life. 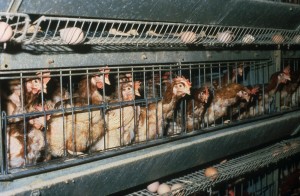 Allowing this system to continue in the UK when the ban should be being enforced is wrong. DEFRA need to stand up and take responsibility for making these farms compliant. Passing responsibility in circles from farmer to Government only delays the implementation, DEFRA need to act now!

The following comes from Compassion in World Farming:

The UK egg industry offered repeated assurances that they would be fully compliant with the EU barren battery cage ban by the 1st January 2012. Shockingly, this has proved not to be the case.

Information released by the Department for Environment, Food and Rural Affairs (Defra) shows that around 30 egg producers in the UK are not compliant with the ban. The result is that as many as 300,000 hens are still being kept in illegal barren battery cages.

Given that egg producers have had since 1999 to get their hens out of these cages, this situation is appalling and in urgent need of resolution.

CIWF are asking all those who wish to ensure the ban is implemented throughout the UK to use their Compliance Letter for Jim Paice (Minister of State at Defra) which can be found here:

Although in a perfect world I would have all hens in a working free-range system realistically the move away from the barren system is a huge animal welfare in farming leap that we should be encouraging farmers towards. Please sign the letter and petition for CIWF, without public pressure and the hard work of organisations such as CIWF animal welfare would easily be overlooked by our government and those throughout the EU.