I’ve not posted anything this month until now mainly because of the weather. It’s been so hot that my outside time has mainly been early on or late in the afternoon and frankly, I found it a bit too exhausting to write much. 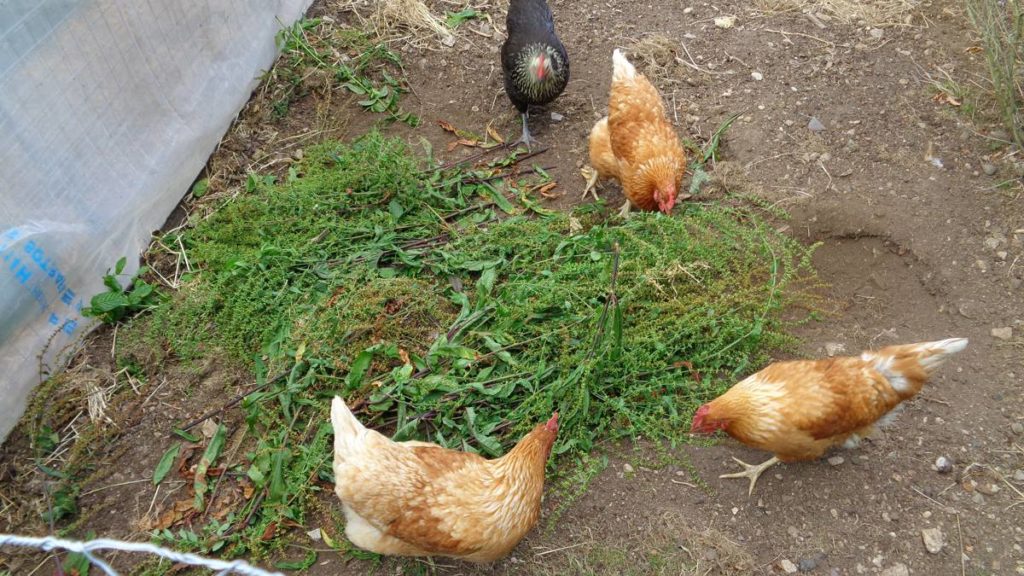 Coping with the heat

The ladies have coped well with the heat, which isn’t surprising as their ancestors roamed the jungle floor and jungles are hot places. The fox-proof run is quite shaded as well by some trees to the south and the wall to the east. The main run has three bushes which also provide shade. When the sun is strong you find the girls all move into the shade.

The critical thing is to ensure they have plenty of water available. On the hottest days I’ve topped it up three times. I just keep a watering can outside the run saving running back and forth to the tap.

Nervous in the Long Days

I don’t think hens like the days being as long as they are at this time of year. They seem to get a bit nervous and head up for bed before dusk has properly started. I’m sure Chocky, the Norfolk Grey, is older than was made out by the seller at the auction. Not just the fact she only lays a couple of eggs a week, it’s her heading up into the coop in the afternoons for an hour. I don’t mind, I like a nap myself on a hot day. 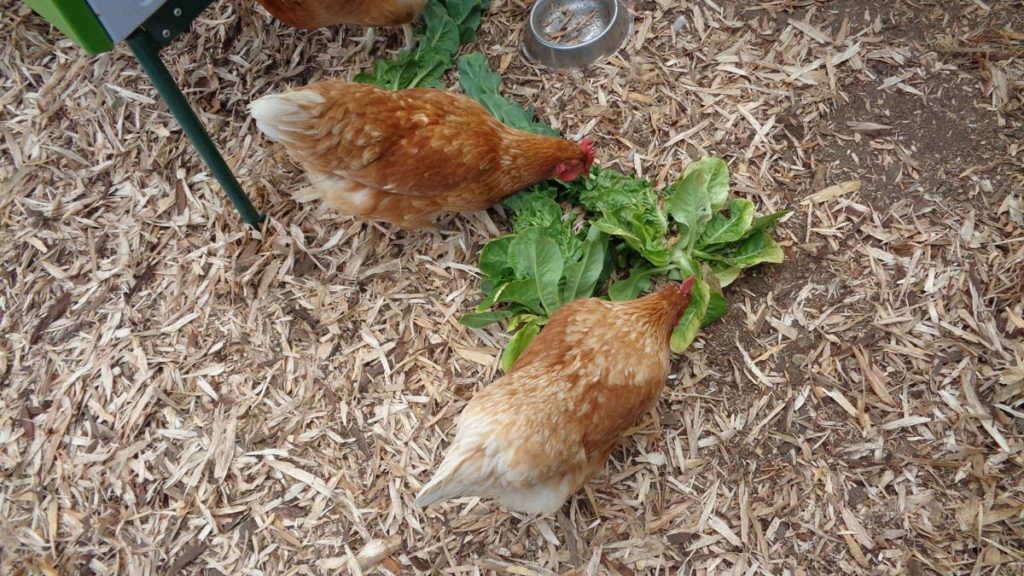 Bolted Lettuce are a favourite – usually I hang them if I can but these were snatched from me!

I’m afraid I’ve been spoiling the hens a bit. With the weather being as it has, I found myself with quite a few bolted lettuce which went down a treat. The herb bed has been going wild too – mint seems to be a particular favourite but sorrel that had gone to seed wasn’t quite as much of a hit. Split tomatoes and slug-damaged strawberries are, of course, the number one treat.

I’ve had a problem with chickweed trying to swamp my raised beds and quite a bit of ‘fat hen’ growing in the walled veg area. Not so much weeding as gathering extra feed for the hens. Both are said to be edible for people too but I’ll stick to converting it to eggs, thank you. I like eggs.

Outside of the fox-proof run the main run was fenced with Omlet fencing. That’s great for moveable and temporary fencing but Chocky had discovered she could, with perseverance, get under it. Who’d have expected the prisoners to dig a tunnel? We’ve knocked some wooden posts in and put chicken wire around it now, burying the base of the wire. The Omlet fencing is being used to portion off the reseeded section whilst the grass re-establishes.

Chocky, having shown the way, would be followed by the rest who proceeded to make as much mess in the flower border as they could. The funny thing is that I’d walk around, see the mulch from the border all over the path and exclaim “Oh! Chocky!” She then leads the gang to stand outside the door to the secure run without further ado.

You may recall that I have covered the mesh roof of the secure run with polytunnel polythene. It keeps the rain off the girls – normally we get a lot of rain – and provides bio-security in times of avian flu alert. Unfortunately it had caught on the mesh and torn.

Given time the wind blowing it would rip it up and it would have to be replaced. To stop this we’ve added some cross battens over the polythene to stop it flapping about in the wind. Not perfect but it will do the job with a little luck.