In my last post, Bob was recovering well and I was confident she’d be 100% in just a few weeks. Sadly that wasn’t to be.

Her scaly leg seemed to be clearing up nicely but whilst we were putting vaseline on her legs we noticed a partial prolapse and what could have been bits of broken egg around her vent. 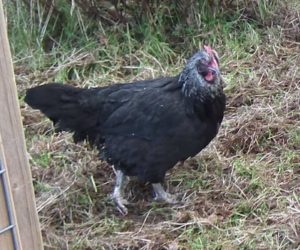 Bob the Hen by End of November

She was down yesterday morning and slow to leave the coop but by the afternoon she seemed to have picked up a bit. I’d kept them in the secure run for the day. The weather wasn’t that bad but I wanted her to stay undercover.

That evening I went back up to check them and close up the coop. I shone the torch round as I always do before I head back and realised she was still outside, sitting underneath the coop.

I picked her up and felt her crop which seemed empty, she felt light as well. Anyway, rather than the main coop I popped her into the nestbox, thinking she might be happier in there. No more ado she went straight into the main roosting area.

Well we had a family discussion and decided the kindest thing to do was to cull her if she wasn’t improved lunchtime today. It’s always a temptation with pets to keep trying but there’s a point where you’re causing suffering for your benefit.

I went up early to the coop this morning, it was just getting light but not yet sunrise. The others came out quite happily and headed for the food bowls but Bob was still.

Thinking back the only thing we should have done differently was to worm them immediately when we got them. I should have realised that anyone who let their hen get into the condition she was in when she came was likely to have other problems. The Nova Browns looked like they had been pampered pets but the Norfolk Greys were livestock and not particularly well managed livestock.

On the other hand, if it was as I’m pretty sure it was, an egg breaking inside her there’s not much that can be done. Just bad luck. We’d done our best with her and at least she ended her days being looked after.