Poultry Blog Home › My Chicken Diary › Chooks in the Snow

Chooks in the Snow 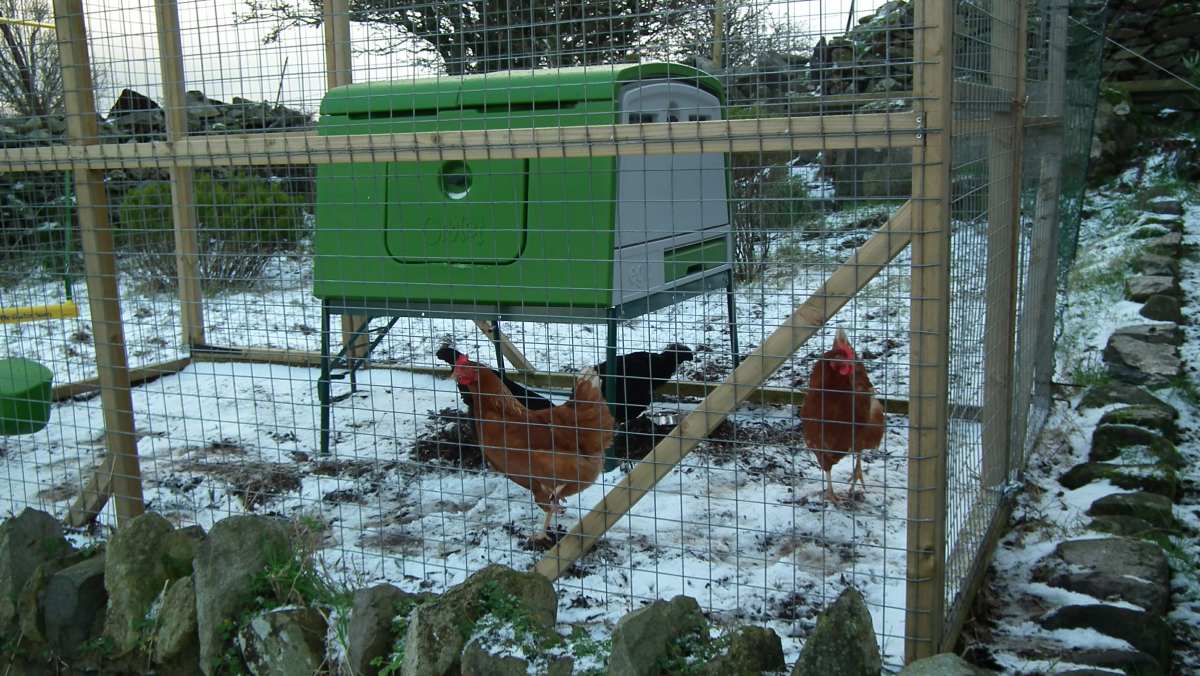 Today started cold with a cross between hail and snow coming down heavily from a very dark sky. So I decided to leave the girls until it slowed down at least.

Well it was hysterical when I opened the coop to let them out. Normally you open the door and stand back as they rush out to the food. If there’s any corn left from the night before they make straight for that, ignoring the pellets until it’s all gone.

This morning the rush hardly started when it came to grinding halt as they surveyed a world turned white with snow. Very cautiously they crept down the ladder and checked their treat bowls. There was a little corn left from the day before but it was covered with snow so they went over to the pellets.

One of the Nova Browns came halfway down the ladder, thought better of it and rushed up to the coop again. Then down a few rungs before rushing back up until the second Norfolk Grey, Bob, more or less knocked her out of the way and headed for the food bowls.

After that she decided finally decided to risk death by drowning in a dusting of snow and slowly stepped across to the feed.That was one small step for a chicken, one giant leap for poultry kind!

Then all of a sudden, she decided it was just another of those confusing things life throws at you – like treat bowls being empty when you’ve eaten all the food. Life returned to normal.

Whilst all this was going on, I checked the water was OK and there was plenty of layers pellets in the feeders. Then I scraped the snow off the corn in the bowls, gathered up an egg and headed back inside.

After a warming cuppa, I decided to give them some more corn. I thought they could do with some high-energy food to help keep them warm. The thermometer said 3ºC but the wind-chill was making things a lot colder.

In view of the conditions, I thought they were best left in the secure run for the day. I think they were expecting to be let out and some disgruntled clucking started as I headed off.

Around half three, went back up to give them yet more warming corn when I made a rookie mistake and didn’t close the door properly. Charlie is heading down the path so I tap the treat bowl but to no avail. She’s determined she’s going down to the fruit trees.

Normally the Novas are very docile and seem to like being picked up. Not today, she struggled and flapped like I was trying to kill her. By the time I get her back up to the run, the rest have decided to make a break for freedom.

Finally I managed to get them back in after enough chasing around and they were pecking away at the corn. By half four it was dark and they were safely in the coop, warmly huddled together at the back and discussing the day between them.

There’s information on looking after chickens in winter on the site you may find useful see below.

Winter Jobs Around the Hen House – Be Prepared!

Leave a Comment Here on Chooks in the Snow