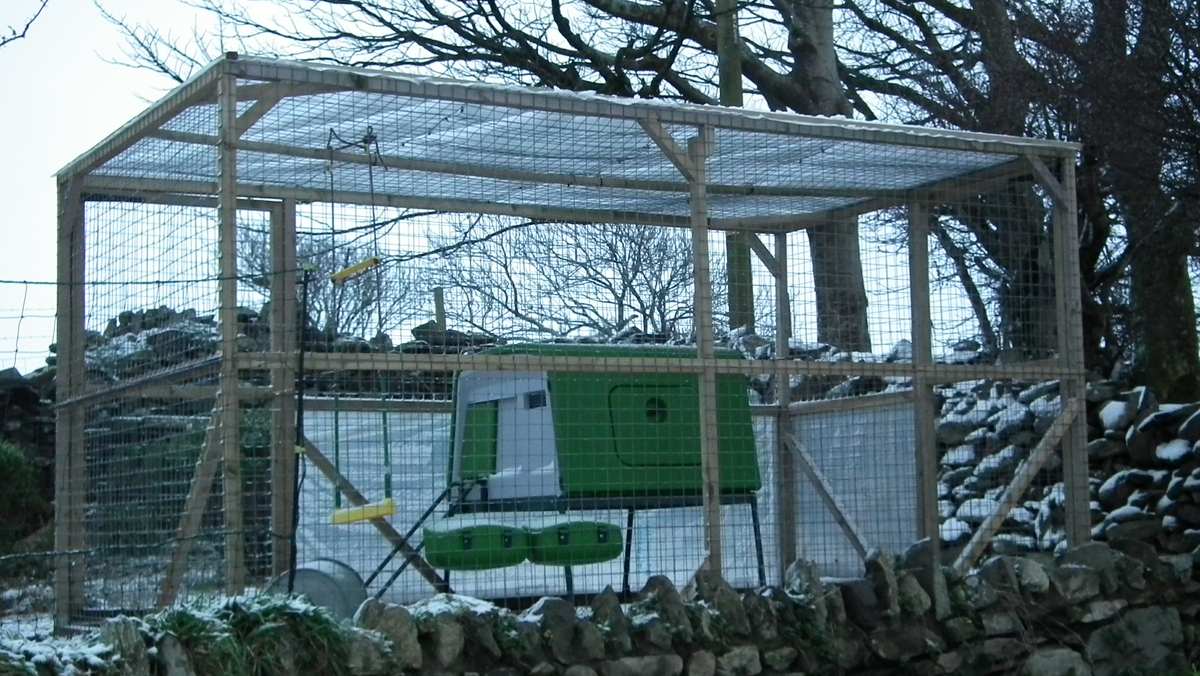 One of the problems to overcome here is the weather. We get a lot of rain, in fact we’re in one of the wettest areas of the country. We also get a lot of wind. Being 200 feet up from the coast, which we’re open to, we get some real gales. 60 mph gusts are not uncommon and the wind has actually gone over the ton, 100 mph, a couple of times.

The Norfolk Greys tend to shelter underneath the coop when it’s raining hard but the Nova Browns are not the brightest of hens. They are lovely and friendly but they really don’t have the sense to come in from the rain.

The secure run is in one of the most sheltered spots we have with walls to three sides of the area but even so, there are times when it’s like a wind-tunnel for the ladies. We’ve also had a bit of snow and there’s warnings of more to come.

How I Sheltered the Hens – A Cunning Plan!

So my cunning plan is to provide a roof over the top of the secure run and some side shelter to protect them from strong winds and wind-blown rain. I don’t want to totally enclose them, I think fresh air is part of a natural environment, so the side shelters will be basically at one end of the run. The run will be open above three feet high anyway – apart from the roof.

I thought about using corrugated clear plastic roofing but that works out quite expensive and it can be tricky to fix. The same goes for polycarbonate sheeting. It needs to be clear though, otherwise it will be dark and dingy in the run for them.

Then the answer came to me. I was in my polytunnel when I thought the polythene sheeting is very tough and it’s quite easy to fix. All you need to do is to batten it on, using 1½” by ¾” treated timber nailed over the existing run’s wooden frame.

So onto the First Tunnels web site where they sell polytunnel polythene by the metre and order 2 metres of 7 metre wide material. What’s surprising is that they’re cheaper than Ebay sellers! Just over £20 including delivery. It’s unusual for the best to be the cheapest but I’m not complaining.

Fixing it on to the run

My neighbour came down the hill to help me fix it on. It started well, we got the cover over the top and in position when a gust of wind arrived to blow it off again. Luckily my son in law showed up and between 3 of us we had it fixed on in short order. We then put the windbreaks on in an ‘L’ shape which should give them shelter when it’s storming.

The predicted snow arrived in the early hours, somewhere between 4 am and 7 am but it wasn’t as much as they originally thought, thank goodness. The wind had blown more snow into the run than I thought though. If need be I can add more windbreaks, I’ve more than enough material. I don’t really want to though, there comes a point where I may as well keep them inside.

Maybe I’m just being silly, but I’m certain they really enjoy being outdoors. I open the run door and out they charge, scratching at the grass and clucking contentedly.

The other day it was starting to get dark so I lured the hens back into the fox-proof run in case the fox is hunting around.  Then I noticed I’d dropped something in the insecure patch and went back for it.

One of the Nova’s got out of the secure run because I left the door open for a moment. I picked her up to take her back. Normally they’re fine and actually seem to like being picked up but not this time. Flapping and squawking like I was a monster. It reminded me of a toddler’s tantrum. She certainly didn’t want to go back into the secure run.

Leave a Comment Here on Weather Shielding the Chicken Run