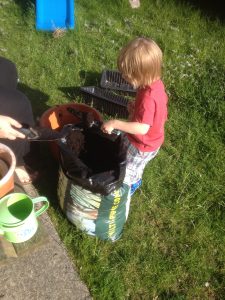 It was Gabriel’s birthday last weekend and he asked that we go camping as his main present. In order to actually go camping though we needed to test the tent out as I recalled it had a leak last year that needed fixing.

We decided to pop the tent up in the field at my parents’ smallholding for the night and camp there – then leave it up until the weather changed to find where the rain was coming in. It meant I was able to pop home to lock up the chooks and feed the cats easily.

Gabe had a lovely time with camping food (sausages and marshmallows!) and listening to the birds and rustling of the wind in the tent. After camping out for the night he was super excited about his birthday the next day as well as going on a proper camping trip at the end of the month.

Sadly though when we returned home we found that a fox had visited, got into the chicken coop, and all three birds were gone – leaving nothing but a huge pile of feathers to great us as we came home. Gabe was devastated.

I debated telling him they had gone on holiday elsewhere, but in the end we explained that Mr or Mrs Fox had visited and they had a very hungry tummy, and they may have had babies to feed, so they had eaten the chickens. Unfortunately the response from Gabe was that naughty Mr Fox needed to come back and spit his chickens out and he no longer wanted his birthday.

Sadly predators such as foxes will attack unguarded poultry. In this case the fox proved to have a good kick having collapsed the side panned on the chicken coop to gain access. It should always be assumed that you have foxes and other predators and if free ranging it is a risk that needs to be accepted to some extent.

Housing can be reinforced and secure runs built if you have a persistent fox problem, or want more security. We’ve a series of articles on the site about predators and how to protect your flock which you can read here.

We will now be without a flock for a while as firstly I know the fox will be back as they often return to where they have found prey. Secondly though we may well be moving at the end of the Summer. With Gary coming to the end of his course and applying for jobs all over the UK, we are a little up in the air as to what will happen. It makes sense for us to not restock until after we know where we will be beyond August.

Whilst we will be poultry less for a few months we decided that we would grow some patio vegetables since little beaks won’t be eating them all whilst free ranging. We have just been leaving the growing to my parents over on their smallholding, but thought some fresh lettuce and tomatoes would help cheer Gabe up too.

Gabe spent a lovely afternoon picking plants (including some pretty flowers he fancied) and then helping to pot them up. It certainly took his mind of Naughty Mr Fox!

We are lucky here that there are lots of smallholders who keep poultry, so buying properly free range eggs is easy for us. It isn’t quite the same though as two minutes fresh from the hen, and we certainly miss the peck peck at the window from Star telling us it is treat time every afternoon.