On the whole the cats and chickens co-exist with no problems. If we leave the back door open we do often find the chickens attempting to beat the cats up to get to their food bowls – the cats always lose when the chickens gang up on them, they are terrified of them! 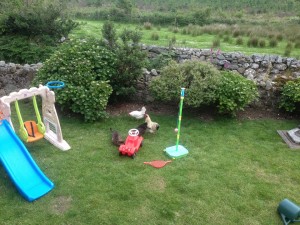 A few days back one of our more elderly cats, Arwen, managed to catch herself a mouse. As it was a lovely day I had the window open and heard her tell tale call letting me know she had caught something and the squeak of the mouse. A few moments later I hear an almightly screech so run to the window to see just what is going on…. The chickens had also heard Arwen claiming she had caught a mouse, and Bolshy decided that in fact it was HER mouse and Arwen should release custody of it immediately!

As a result the little mouse escaped under Gabriel’s toy car, Arwen got a good peck on her bottom from Bolshy, and both cat and chicken were circling the little car trying to find the hiding mouse. In the end I went out and the mouse escaped, the cat ran off and hid from the chickens, and Bolshy gave me a good pecking for having lost her the tasty treat!

Lesson learned? The cat should now know to keep her kills far from the garden and in the battle of chicken v cat, the chicken always wins!!!

Sadly Arwen, in the pic, came home last night with a very sore paw. After some gentle persuasion (posh cat food..) she let us have a good look at it and it seems it has got torn up on barbed wire or similar. The cuts had stopped bleeding, but was very inflamed and sore for her. Now we have the joy of a course of antibiotics for her, it is never an easy task giving a cat a pill! They have a sixth sense for these things, and can hide even in plain sight when pill time comes around…