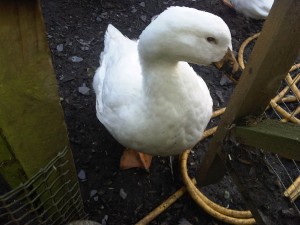 Have a had sad week as my lovely drake Bee had to put to sleep. Over the winter he went gradually downhill, but with no apparent cause. Always a lazy one for bathing he became more and more reluctant which led to the inevitable wet feather even with being forcibly dunked and made to bathe in fresh water on a daily basis.

After being wormed, mite treated and given lots of different boosters he showed little change and then had an accident involving a nail and his foot  😥 A long course of antibiotics and painkiller later and his foot seemed healed but he was still very much a depressed duck with no noticable cause!

About 8 weeks after the foot incident he started to waddle more than a duck should waddle and also began using his wing tips for extra balance. Thinking it may be a strain as no obvious injury he was again popped on some anti-inflammatory pain killer but over the course of ten days he went really downhill.

Three days of being carried from pond, to food and then to bed and another vets trip and it was obvious that there was nothing else we could do for the little mucker and that he was no longer enjoying his ducky life so I sadly made the decision to put to sleep.

I then did something I am not proud of and let the vets put him to sleep without me in the room. I always like to be with them when they pass and before he went in for the final injection I did get quite a cuddle off him, but I think the hormones of being 8 months pregnant made it just that little bit much to cope with being by his side. Thankfully he went very quickly.

Bee is now buried in the garden with a Gooseberry bush on top of where he was put. His brother Bumble very much noticed he was gone and the first night was frantic looking for his lost flock member and the next couple of days was looking and out of sorts (as were the girls). The spring air however has helped him forget and he is doing his very best to make sure his girlies are able to hatch some little nephews and nieces for Bee!