After losing Bob and then an Avian Flu Prevention Zone being declared, I thought it sensible to give the Eglu coop and the secure run a deep clean.

I’ve wormed the girls and treated for coccidiosis but hygiene is always important to good health. I know they had both tapeworms and roundworms but the coccidiosis treatment was just being belt and braces.

The coop got a thorough jet wash, a wipe over with disinfectant and jet washed again. The run was raked, removing all the wood chips, and the top of the soil below taken out to the compost heap.

A sprinkling of stable fresh followed and then new wood chips spread on the ground. Finally the feeders were given a wash inside with hot water and detergent.

Eventually I managed to outwit a chicken! 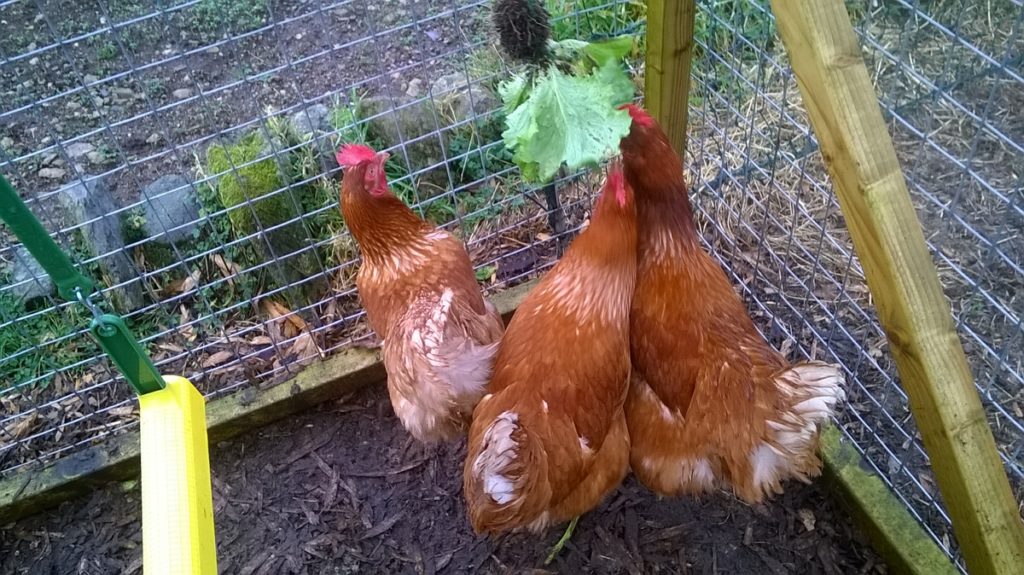 I’d let the hens into the fenced off plot where they were happily scratching and pecking. When I finished the cleaning and the feeders were filled I opened the door to let them in. Chocky however had escaped into the garden followed by a Charlie. They were happily moving the bark chipping mulch from the border to the path.

Charlie just came up to me so I carried her back in but Chocky was determined not to give in easily. After 15 minutes I gave up and grabbed a lettuce out of the polytunnel. I hung this in the run in the corner and guess who appeared. Keeping me running around may be a great game but chasing the lettuce is far more fun. 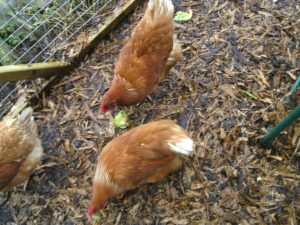 Lettuce Football – Charlie has possession and has distracted the defenders!

I’ve some cabbages that haven’t done too well along with lettuces that are a bit frostbitten so I just hang them from a bamboo cane supported in the weldmesh across a corner. They love pecking it and running away with leaves they’ve torn off.

The funniest was when they pulled the heart of the lettuce down. It was just like a game of football with them knocking it up and down the run, fighting for possession.

They’re spending quite a lot of their time in the secure run what with the weather and now the avian flu which is presenting a feeding problem. They love some greens and, in hindsight, I wish I’d planted more cabbages and lettuce for them. Bit late now to sort but I’m having a go at microgreens which can be ready to eat in as little as a week.

With luck I’ll be able to provide a supply of nutritious, tasty greens for them undercover despite it being the depths of winter. If the weather is kind and the Avian Flu problem goes away I’ll let them clean up the walled veg garden for me. It could do with being debugged.. a bit like my computer.

Leave a Comment Here on Outwitting a Chicken – Just!