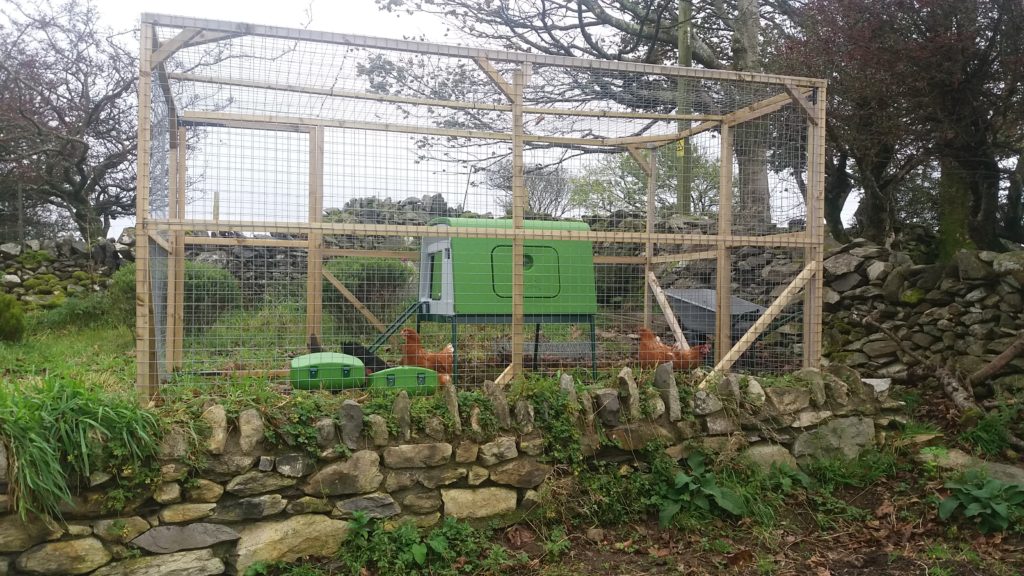 Our New Flock in their Fox-Proof Home

Saturday was the day of the local poultry auction. Since the new coop and run were ready we went along to see what was for sale.

Most auctions post the full listing ahead of the day and it is worth checking their website and downloading the list. That way you know whether or not the trip is worth your time. October’s Poultry Auction at Bryncir had a number of lots we were interested in, both pure breeds and hybrids.

Setting a Budget at a Poultry Auction

One of the most important things to do ahead of a poultry auction is to set your budget. I tend to check out local breeders and see what they are charging for POL hybrids and pure breeds and use this to figure out my maximum bids. At our local auction house the buyer has no additional fees for poultry, but it is worth checking if this is the case beforehand to calculate this into your maximum bids.

At the auction you often find some buyers get “Auction Fever” and those that you could have bought for £15 a piece locally go for far more than that on the day. On Saturday we noticed this with the Black Rock pullets, although I bid on them they went up far beyond what I could get them for from another local breeder so I left the other two bidders to fight it out for a poor investment!

I’ll be writing up a full article on Poultry Auctions over on the Poultry Articles’ section. 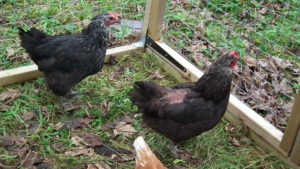 ‘Bob’ the hen showing her bare patches on her back. This is due to the cockerel. She’s healing well.

In the end we came home with 5 new hens. Three point of lay Nova Browns (your basic brown hen) and two Norfolk Greys which are a dual purpose (utility) pure breed that are now considered to be a rare breed.

Now, normally I wouldn’t get involved in bidding on rare pure breeds as the price is usually well out of our budget for what is just an egg laying flock. However, these Norfolk Greys grabbed my attention as one looked as though she had previously been penned with a cockerel and as a result had lost a lot of back feathering.

When it comes to birds at auction sickly or pecked birds are ordinarily best avoided, but in this case other than the pecking, she had bright eyes and whilst there she laid a well formed egg. As well as this her cage mate was in fine condition and depending on how the bidding went was worth bidding on as a sole bird.

I’d say that unless you are confident in your ability to nurture a sick hen, or dispatch when needed, to not bid on hens that you aren’t convinced are fit and healthy.

In this case though, having had rescued commercial birds in the past who had next to no feathering, I was confident she could be restored to health. I’m also a softy and heard two people debating bidding on them for the cage mate and culling her once home – I wanted to give her a chance!

In the end only one other person was bidding on their pen and I managed to get them both for just £10. Gabe immediately decided the girl with no back feathering was his and he would help bring her back to health, he also called her Bob (he has missed our cockerel Bob ever since Mr Fox visited last year). 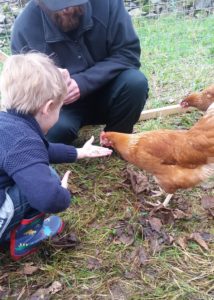 Once back to the smallholding we needed to get them all settled. I’d decided that if Bob looked to be quite under the weather we would use the smaller isolation coop we have to keep her in, but if full of vigour other than the feathering I’d leave her with the rest of the new flock.

As it happened she was straight out of the box exploring the new secure run, and off to the feeder within moments. With her good body language it was clear she was actually in fine health bar the feathering and worth the risk I had taken bidding on her.

The companion Norfolk Grey, who Gabe has called Choccy, immediately let the three Nova Brown hens know she was Top Hen and they all settled in to scratching at the grass and leaves, and exploring.

In order to make sure that the area of missing feathers on Bob wasn’t attacked by the rest of the new flock we caught her and sprayed her raw spots with anti-pecking spray. This is a coloured antiseptic spray with a nasty taste to it. The colour covers the flesh where pecked so they are less likely to peck at it, the antiseptic helps heal and cuts and the taste means if the other hens do have a peck they soon learn not to. I also noticed when handling her that she has some leg scaling which we also treated.

We have also added a vitamin and mineral solution to the water for the flock. This will help them after the stress of auction (which can have an effect on even the most robust of birds) and will also aid Bob in re-feathering.

I have to admit that yet again my favourites are the Nova Brown hybrids. These are the brown hens most people in the UK associate with commerical egg farming, and they are bred for this not only because of their good egg laying abilities, but also their more docile nature. Immediately it became clear these three little brown hens were very friendly and were clucking around out feet, pecking our shoes, and eating pellets from our hands. Gabe has named the cheekiest of the bunch Charlie, and he is rather in love with both her and Bob.

We have so far been gifted with one little egg which we suspect is from Choccy since the Nova Browns are a little too young to lay yet and Bob will likely need the Winter to recoup her egg laying energy.

Leave a Comment Here on Poultry Auction and New Hens