You can tell that Bob, Bolshy & Star are rather pampered chickens. The weather has been awful the past month, and they have complained bitterly about this fact. On one day the lid blew off their feeder so the food got wet and wasn’t dropping. Bolshy made sure I knew about this though, pecking at the front door and squawking loudly until I came out to see what the fuss was all about! It goes to show there is some intelligence in those little bird brains, and that they can make sure us humans do what they want when needed. 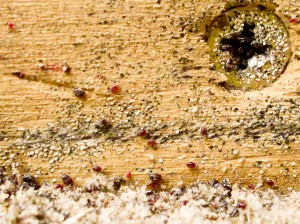 We have redmite. This is the first time in many years, and I was surprised about it due to the time of year. Our first clue was Star refusing to go to bed one night, Gary found her perching on top of the coop and popped her back in with the other two. Over the next couple of days she looked a bit peaky and again was refusing to go to bed at night – all the clues to redmite!

We’ve thoroughly cleaned the coop out, disinfected, and treated it. Treated the birds too, and since when we realised they were mid-way through being wormed they have been well and truly treated for anything and everything! It looks as though we have got the little blighters, but to be careful we’ll be following the same routine every three days for a couple of weeks.

Redmite can kill. It just isn’t worth taking the risk, and I’ve known people to have to burn the coop and buy new ones before following bad infestations. It is far better to over treat the coop and treat the birds a couple of times, than end up with poorly chooks and an expensive coop bill. As you can see from the picture above (uploaded to our forums by a member) they are tiny little things, but so much damage can be done. We’ve a thread over on the forums all about redmite, so if you think you may have a problem too pop on over and they will be able to help you out.

We’ve been doing lots of baking recently, thankfully over the summer I froze up a lot of our eggs as yolks and whites so even though we are having to buy eggs for boiling and poaching I was able to use our own for cakes. I also realised it is great for saving on waste. A few recipes I’ve used have called for an extra yolk, and instead of then having to think what to do with the white, I have them just ready in ice cube trays to use as needed. If you get a glut next summer I highly recommend freezing into ice cube trays too for winter cookery.

We all know the DEFRA position on treats and scraps by now – here is an article by John over on the Poultry Pages that goes into more detail – but lets just say I hope they never visit us! The past few weeks Gabe has taken to referring to anything left over on his plate as chicken food and wants to take it out side. I of course have no idea where he has got that idea from…