When it comes to feeding the chickens they mainly get a balanced layers pellet as well as free ranging in the garden. The DEFRA position on feeding chicken’s scraps is not something I agree with, but the law is the law and you can read more about it here. What you can do though if you have a glut is feed straight from greenhouse to chooks and the DEFRA regs don’t kick in. 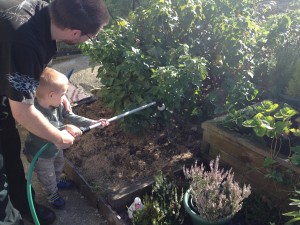 With John & Val being off on their jollies we’ve been popping over to check on the greenhouse as it is currently overflowing with tomatoes, peppers, and cucumbers. Gabriel likes to help out with harvesting and watering – although I think he sprayed us more than the veg! The strawberries that were ready never made it far from the plant as he stood eating them telling us how lovely and juicy there were.

There were a fair few tomatoes that had gone a bit too far, and since we had such a good haul anyway I bagged them separately and brought them home for the chooks. The girls love fresh tomatoes, and I used to find the ducks went crazy for them too. I just make sure they don’t get treats like that until later afternoon so I know they have eaten plenty of pellets and it helps keep their egg quality up. 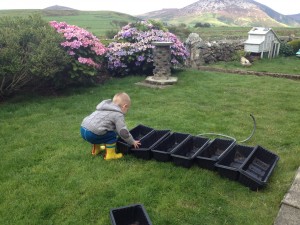 As is often the case here in North Wales, after a wash out of a summer we have a lovely sunny Autumn. This means we can finally catch up on all the jobs that needed doing outside! Gabriel helped empty out the lettuce planters and then lined them up – this kept him entertained for nearly an hour! I love sitting outside watching him play with the chickens clucking around him. I think they know he has a habit of dropping food so are always on the lookout, the cats certainly are.

The chicken coop is in need of some minor repairs before the winter. A coat of animal safe stain and a little reinforcement to the sliding base as it has warped slightly with age. Hopefully it will then see us through another winter and next year I suspect we will replace with a larger house so we can add a few more girls to the flock. We are off to the Poultry Auction first weekend of October, but I’m under strict instructions that nothing is to return with me, we shall see…