Wyandottes & Plymouth Rocks from The Practical Poultry Keeper by Lewis Wright 1867. Colour Illustrations by Ludlow from the 1899 Revised Edition. 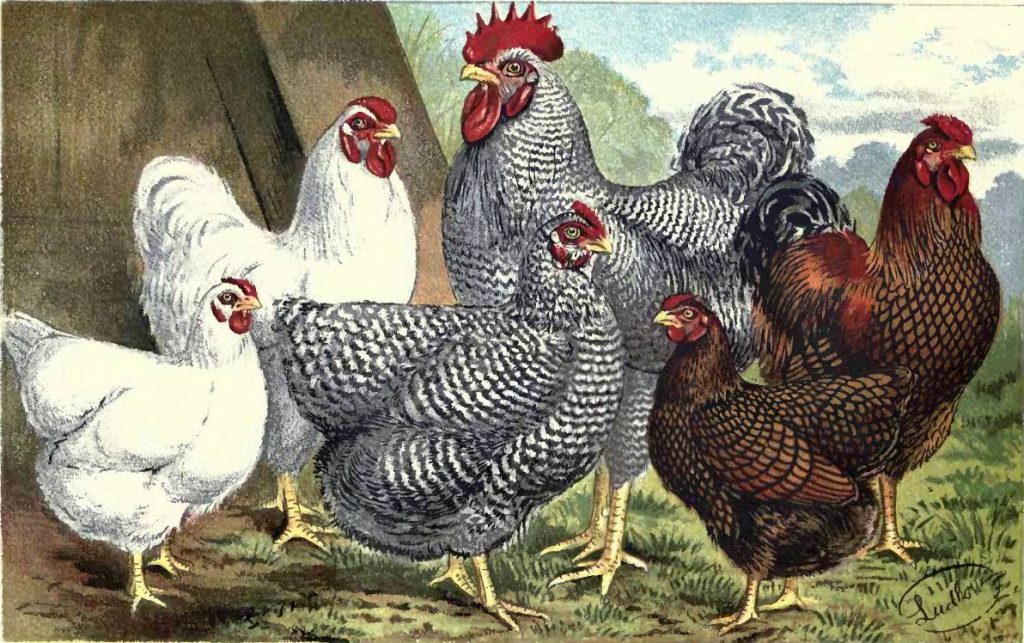 The hen’s hackle resembles the cock’s, only shorter and broader. Secondaries and primaries of the wing same as the cock, and her tail also is black, the coverts black with white centres. All the rest of the body breast, shoulders,back, and cushion white, sharply and evenly laced with dense green-black, free from soot or speck in the centre, and as uniform in width all over the bird as possible.

Her under-fluff also should be slate colour. The legs (clean) are bright yellow. The size is large medium, cockerels weighing about 7 Ib. and adults a pound more, and females a pound less.

The same description applies to Golds, with the difference in ground-colour, and the fluff is almost black, a little powdered with yellow. The principal faults in marking and colour are light fluff, crescents or spangles on the breast instead of lacing round the feather ; lacing inside the very edge of the feather (double lacing) ; soot or moss inside the lacing ; lacing so heavy as to show hardly any centre, or very narrow lacing, or any great inequality of lacing ; spangled instead of laced bars in the cock ; rusty or brown lacing instead of black.

In regard to the last point, however, fine pullets often moult out brown or mossy as hens, and such will breed as well as before ; still, such as preserve their colour are to be preferred, and by degrees this tendency may be bred out.

Buff-laced have recently been produced, in which the colour is buff beautifully laced with white, instead of black. As in the case of Chamois Polish, the lacing seems more accurate than when the marking is black.

Good classes have appeared at the Crystal Palace, but the breed is in very few hands, and its popularity remains to be seen.

White Wyandottes were probably in the first place a sport from silvers, but have been aided by a white Dorking cross, which has left its mark in coarse combs and a rather Dorking body, points which still need attention.

Needing less care, except in ‘these features, this is no doubt the hardiest and best layer among all the varieties.

Buffs were produced by a Cochin cross. It is still very difficult to find birds free from black ticks, or white feathers.In breeding there is little chance unless a cockerel can be secured of sound even buff colour, a shade or two darker than desired, with hens even all over, and free from black in hackle or tail.

If even all over, the hens may differ a little in shade ; and indeed such an assortment is most likely, amongst them, to hit the mark.

Partridge Wyandottes are rather frequently exhibited, and there were fair classes at the Crystal Palace in 1898. The colour and pencilling is not only pretty, but seems to suit the real Wyandotte shape very well ; only unfortunately that shape has so far been much lacking, the deficient Cochin breast being but too prominent in those exhibited. This fault will doubtless be corrected in time.

Like most cross-made breeds, the Wyandotte is hardy when not too much inbred, its shape is extremely good for table, and it is a wonderful layer of brown eggs, which, however, are on the average a little small. The White variety being easiest to breed, is the best layer, so far as we know, and a large flock of birds of this colour has been known to average 175 eggs in a year.

In the poultry mania period, Dr. Bennett gave this name to a fowl he compounded out of four breeds crossed together, and which naturally became extinct soon after. Years afterwards the name was revived and given to a much finer breed, which has become very popular both in America and this country, where it now has large classes at shows.

There is no doubt that it was produced by crossing the American Dominique, with some breed of Cochins, and the Black Java.

The body is compact and deep, with a full, well-rounded breast : this is essential to good stock, and poor breast a great fault, however good other points. The saddle, or cushion, is full and rather high, but not globular as in the Cochin, nor so fluffy,and the fluff on the thighs is compact and moderate.

The plumage is what is known as cuckoo-colour, but the standard of colour is not absolutely uniform. In America it is described as greyish-white barred with bluish-black,” both sexes are demanded alike on breast and body, and the barring is decidedly narrower and finer, and the effect more black and white than in England.

White Plymouth Rocks were founded upon sports from the barred variety, and still occasionally breed barred specimens,though these are disappearing. In all but colour they should resemble the parent stock.

Owing to the less difficulty in breeding for colour, they have lately become known as decidedly better layers, many strains ranking high in this respect. Blacks were attempted to be bred from the black sports, but have made no way owing to the insuperable difficulty of keeping clear yellow legs in this colour.

Except for the yellow leg and skin, the Plymouth Rock is an excellent market fowl, making very early and rapid growth. It is almost always a good layer; and some Whites bred for this point are first-class layers 170 in a year has been recorded.

Like all breeds founded upon crosses, it is hardy where not too much inbred, except that, from some unknown cause, it often shows a mysterious propensity to weakness, gout, cramp, or some affection of the legs and feet. A flock of the barred variety looks particularly well upon a grass farm. A cross between Rocks and a White Leghorn cock, on an average produces, perhaps, the most prolific and all-the-year-round layer of any cross we know.