Bantam Breeds of Chickens from The Practical Poultry Keeper by Lewis Wright 1867. Colour Illustrations by Ludlow from the 1899 Revised Edition. 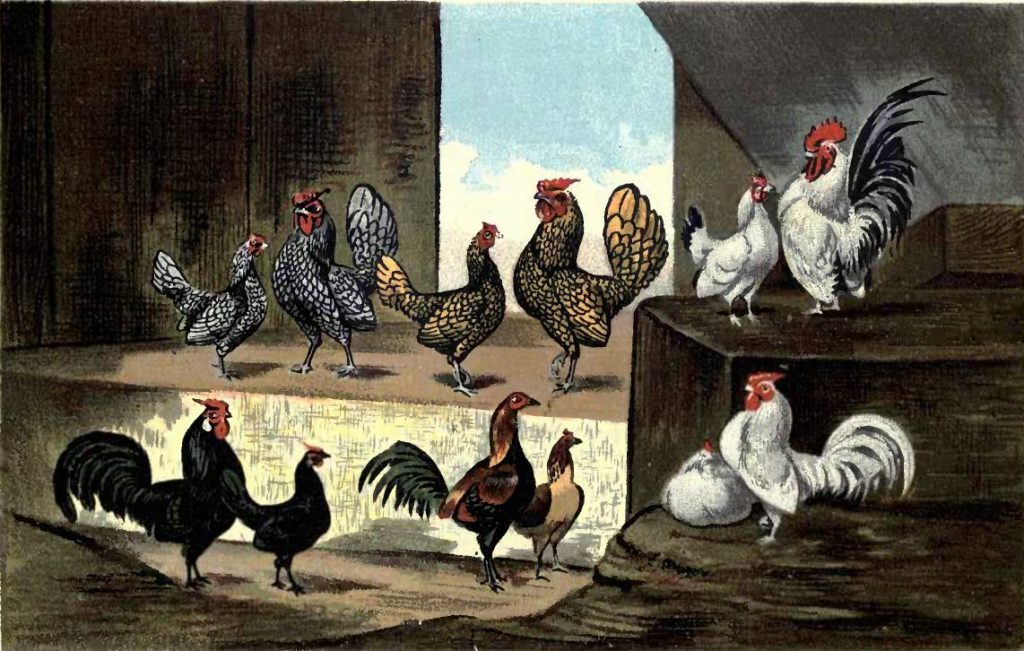 THERE is not the slightest reason for supposing that any of the diminutive fowls known as Bantams are descended from an original wild stock. They are in many cases the exact counterparts of ordinary domestic breeds, carefully dwarfed and perfected by the art of man; and even where this is not so, the process by which they were produced is occasionally on record. They are, in fact, more than any other class “artificial fowls,” and their attractiveness consists rather in their beauty than in any economic value.

PEKIN OR COCHIN BANTAMS. This most remarkable of all Bantam breeds was first introduced in 1860, the original progenitors having been stolen from the Summer Palace at Pekin during the Chinese war.

They were first shown in 1863. They exactly resemble Buff Cochins in colour and form, possessing the feathered leg, abundant fluff, and all the other characteristics of the parent breed in full perfection, and presenting a most singular appearance. This strain, however, became practically extinct.

The importations were very few, and several even of these died, the breed being delicate ; and the owner of what was the chief stock for many years, seemed to care more for having something which no one else had, than for saving the breed, which might have been done by spreading it amongst a few other hands.

Further birds were, however, imported in 1884, and by crossing these with the few left, and with other feather-legged varieties, this quaint breed was resuscitated, and is now well spread. Blacks and Whites are also bred of fine quality, as well as the original buffs ; and of late, thanks to the efforts of the late Mr. W. F. Entwisle, Partridge Cochin Bantams have been added to the list, being, however, as yet rather large.

VARIETY BANTAMS. During late years, owing chiefly to the skill of the late Mr. W. F. Entwisle, by crossing with existing Bantams and breeding size down, almost all the larger breeds of poultry have been reproduced in Bantam form.

The proper standard of size, Mr. Entwisle considered, was one-fifth the weight of the original breed, We can only give a list of the breeds and varieties which have been thus produced.

Bantam chickens require, for a week or two, a little more animal food than other fowls, and, rather extra care to keep them dry. After that they are reared as easily as other birds, and should indeed be rather scantily fed to keep down the size.

Rice is often largely employed in their diet for the same purpose, and so is late hatching ; but this tends to shorten the tails and other furnishing of the cocks. It is better to rely upon an avoidance of such grains and meals as are rich in nitrogen thus dispensing in particular with grits, oats, oatmeal, and middlings and feeding scantily at longer intervals.

This does not imply starvation, but on the very contrary the highest health and condition ; the ample and frequent feeding with which other poultry is often pushed on, by no means always producing the greatest degree of bodily vigour and activity.

In the Bantam we desire simply to produce the light and nimble grace of nature, rather than the heavy flesh which is the breeder’s object in many other cases. Most of the hens are good mothers, and are often employed to rear small game; and are not bad layers if the eggs were only larger.

We believe them, however, to produce quite as much for their food as ordinary breeds. But their chief use is in the garden, where they eat many slugs and insects, with very little damage. On this account they may be usefully kept where a separate poultry-yard is found impracticable.

We should prefer the Game variety, as being hardiest ; and, being good foragers, five or six of these may be kept in a garden for almost nothing, requiring only a house two feet square to roost and lay in.

Bantam eggs are just nicely cooked by pouring boiling water over them in a breakfast cup, on the table.