French Breeds of Chickens from The Practical Poultry Keeper by Lewis Wright 1867. Colour Illustrations by Ludlow from the 1899 Revised Edition. 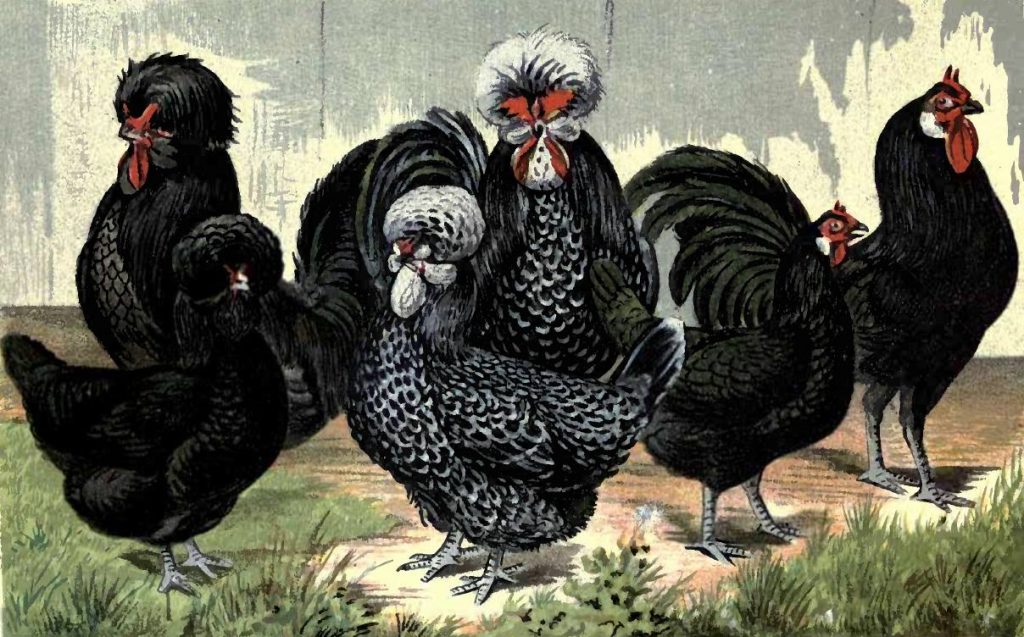 SEVERAL remarkable breeds of fowls have been introduced into England from France, which it will be convenient to describe in one chapter. They all deserve the careful attention of the mercantile poultry breeder, possessing as they do in a high degree the important points of weight and excellent quality of flesh, with a small proportion of bones and offal.

These characteristics our neighbours have assiduously cultivated with most marked success, and we cannot avoid remarking yet again on the results which might have been produced in this country had more attention been paid to them here, instead of laying almost exclusive stress upon colour and other fancy points.

Crèvecoeurs This breed has been the longest known in England. The full-grown cock will not unfrequently weigh 10 lb., but 7 to 8 Ib. is a good average. In form the Crève is very full and compact, and the legs are exceedingly short, especially in the hens, which appear almost as if they were creeping about on the ground.

In accordance with this conformation, their motions are very quiet and deliberate, and they appear the most contented in confinement of any fowls we know. They do not sit, or very rarely, and are tolerable layers of very large white eggs.

It should be remembered that the French have mainly brought these breeds to perfection by seeking first the useful qualities, and it is beyond doubt that the rigid application to them of our artificial canons has seriously deteriorated the breed in practical value.

The merits of the Crève consist in its edible qualities, early maturity, the facility with which it can be both kept and reared in confinement, and the fine large size of its eggs. The hen is, however, only a moderate layer, and the eggs are often sterile, while the breed is rather delicate in this country, being subject to roup, gapes, and throat diseases.

This delicacy of constitution appears to improve somewhat as the fowls are acclimatised and less in-bred. Altogether we do not recommend the Crève as a good breed for general domestic purposes.

La Flèche In appearance this breed resembles the Spanish, from which we believe it to have been at least partly derived. It exceeds that breed, however, in size, the cock often weighing from 8 to even 10 Ib. Both sexes have a large, long body, standing on long and powerful legs, and always weighing more than it appears, on account of the dense and close-fitting plumage. The legs are slatecolour, turning with age to a leaden grey. The plumage resembles that of the Spanish, being a dense black with green reflections.

HOUDANS. This fowl in many respects resembles the Dorking, and Dorking blood has evidently assisted in its formation, probably crossed with the mottled ANCONA . Houdans have the size, deep compact body, short legs, and fifth toe of the Dorking, which in form they closely resemble, but with much less offal and smaller bones.

The plumage varies considerably, but is always some mixture of black and white, arranged in a sort of irregular splash ,or speckle all over. Some hens become nearly white as they grow older, the breed getting lighter with age.

Many of the first imported Houdans lacked the fifth toe, and this feature might easily have been bred out. Unfortunately English breeders went the other way, and rather insisted on it, far more than the French did ; with the result that bumble-foot is now often seen, as in Dorkings.

As to the merits of Houdans, the unspoilt stock is one of the most valuable breeds ever introduced into this country, and in general usefulness surpasses all the French varieties. Better table-fowls are none, the laying powers are great, the chickens fledge and grow faster than almost any breed, and the eggs are invariably prolific indeed, the ardent Houdan cock requires more hens than almost any other.

There is also no hardier variety known. Such a strain is emphatically a farmer’s fowl, wherever the eggs can be hatched by other breeds or an incubator.

BREDAS OR GUELDRES. This fowl is of exceedingly well proportioned shape, with a wide, full, prominent breast. The head carries a small top-knot, and surmounts a rather short, thick neck. The comb is very peculiar, being hollowed or depressed in the centre, which gives to the head a most singular expression.

The flesh is excellent and tolerably plentiful, very large cocks weighing as much as 8 or 9 Ibs. They are good layers, and the eggs are large ; as in most other French breeds, the hens do not sit. The chickens are hardy, and the breed is decidedly useful.

LA BRESSE. This fowl is hardy and large, but we cannot consider it as a distinct or established breed. The birds are all colours without distinction, presenting exactly the appearance of very large and fine barn-door or crossbred fowls ; and we believe that it is, in fact, no breed, but a mixture of fine specimens of different races.

COURTES PATTES. At the Paris Show of 1878 the reporter of the Live Stock Journal gave the first English description of these fowls. They are black, with single combs, and extremely short legs. They sit well, and were said to have been produced by the La Fleche breeders in order to hatch their non-sitting varieties.

They were also said never to scratch in a garden. Some months later specimens were imported by Mr. Christy, but the last characteristic was found not to hold good, at least in English gardens.

They are hardy, good layers, and good in flesh, but do not seem to breed very true in colour and some other points. The extremely short legs gives them a quaint appearance, and are the most characteristic point.

FAVEROLLES. The village of Faverolles, in the Houdan district, has given its name to the last really important breed produced in France, unknown before about 1885, but which has gradually to a large extent displaced its predecessors, so that the Houdan itself, in its original neighbourhood, is now in a great relative minority compared with the interloper.

This is not without reason, as the Faverolles (spelt with an s at the end) combines large size, early maturity, great hardiness, great laying powers, and fine flesh ; being also a good sitter and mother.

French breeders themselves consider it the best fowl yet produced in their country for purely economic purposes. The birds are said to average 150 to 180 eggs per annum in France, of a light brown colour.