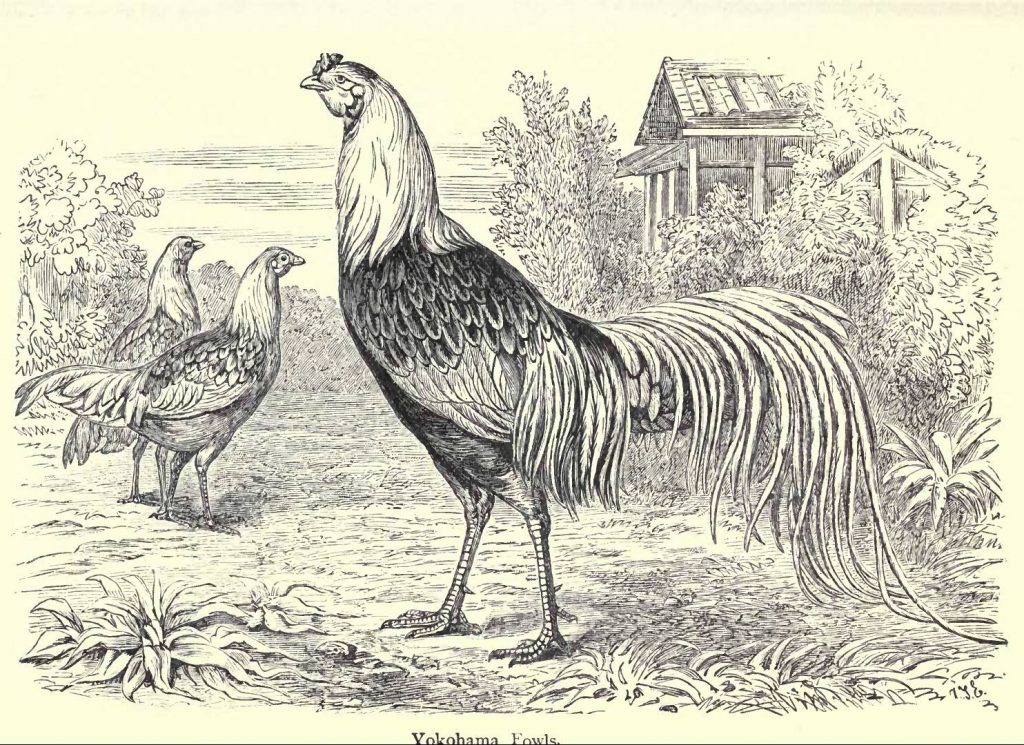 Lewis Wright has little to say about this truly remarkable, ornamental breed of Yokohama Chickens from Japan which is surprising considering the mania that followed the importation of Chinese chickens. When he was writing, little was known about the origins of Yokohama chickens aside from them being from Japan where a French missionary exported the breed to Europe via the Japanese port of Yokohama.

I think they have a very Japanese look about them, something of the Samurai in their elegant ornate plumage and formal upright stance. Or perhaps the Geisha, with elegant formal movements in a kimono.

There have been introduced from Japan, through German importers, some very peculiar fowls, mostly known in England under the above names. The general character of the bodies and heads, and the colours, resemble that of Game fowls; Piles and Black-reds being the usual colours.

The peculiar point is the immense length of the cock’s hackles and streamers. Those called “Phoenix ” have been longer
in feather than others shown as Yokohamas ; but we believe the whole class to be one race at the bottom, and it is to be
hoped that some one name may be adopted.

In Germany, for want of stock, many have had to be crossed with common Game fowls ; and even so, tails three and four feet long have been produced ; but sickles nearly seven feet long have been dropped by some of the importations, and at Tokio, in Japan, there are said to be feathers nearly 27 feet in length.

The illustration is engraved from a painting made in Germany.

This breed is of course of purely ornamental value, and much care is required to keep the plumage in good order. Length of feather, if in decent condition, will naturally be the chief point in judging.