Cochins, Dark Brahmas, Malays from The Practical Poultry Keeper by Lewis Wright 1867. Colour Illustrations by Ludlow from the 1899 Revised Edition. 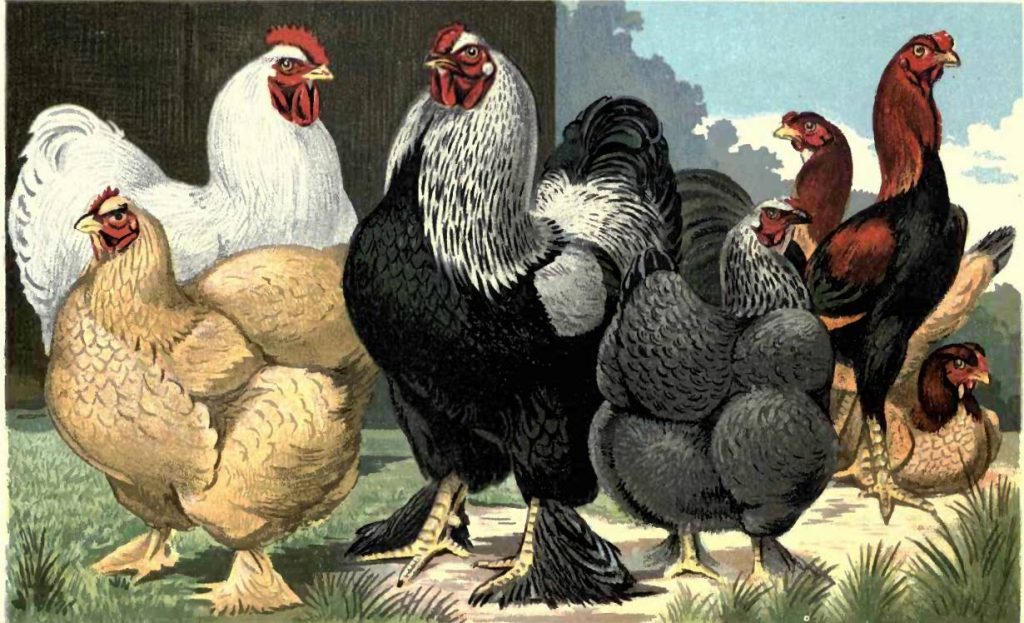 THE Cochin breed, as now known, appears to have been imported into this country about the year 1847, those so called exhibited by Her Majesty (Queen Victoria) in 1843 having been not only destitute of feathers on the shanks, but entirely different in form and general character.

No other breed of poultry has ever attracted equal attention, or maintained such high prices for such a length of time; and the celebrated “poultry mania,” which was mainly caused by its introduction, will always be remembered as one of the most remarkable phenomena of modern times.

To account in some measure for this, it should be remembered that no similar fowls had ever been known in Europe; and when, therefore, Cochins were first exhibited, it was natural that their gigantic size, gentle disposition, prolificacy, and the ease with which they could be kept in confinement, should rapidly make them favourites with the public.

But the extent to which the passion for them would grow no one certainly could have foreseen. A hundred guineas (approximately £120,000 in 2016 currency) was repeatedly paid for a single cock, and was not at all an uncommon price for a pen of really fine birds; and although these prices have been equalled recently by other breeds, it must be remembered that in those early days there was not nearly the same number of poultry shows to win prizes at, which now adds to the money value.

Men became almost mad for Cochins, and all England, from north to south, seemed given over to a universal “hen fever,” as it was humorously termed.

Their advocates would have it that the birds had no faults. They were to furnish eggs for breakfast, fowls for the table, and better morals than even Dr. Watts’ hymns for the children, who were from them “to learn kind and gentle manners,” and thenceforward to live in peace.

Such a state of things, of course, could not last, and the breed is now perhaps as unjustly depreciated by many as it was then exalted ; for Cochins still have real merits. They might have stood much higher if a rather different type had been adopted, for many of the early birds had very good breasts; but unfortunately early fanciers adopted the contrary model, and so spoilt the breed as a table fowl.

IT is unnecessary to say much at this date about the origin of Brahmas. Exhaustive investigation of a large amount of original material, both in early manuscript and early print, for which we were chiefly indebted to Miss Watts, and which was not accessible to previous writers, enabled us to show beyond doubt that the fowl, as imported into America, had an Indian and not Chinese origin, as alleged by Mr. Burnham for reasons of his own.

Burnham states that he got even his own birds from Dr. Kerr ; and Dr. Kerr himself stated in print that these came from Calcutta, though it suited Burnham to change this into Shanghai (often spelt Shanghae in this era) On the other hand, there are too many marks of the same great race as the preceding about them for there to be any mistake on that score. That they are closely allied to Cochins is as clear as that there are many well-established differences both in make and disposition.

The one thing certain is, that the fowl immediately sprang originally from the comparatively coarse and unformed “Chittagong” fowl still found about the Brahmapootra (sic) river, and which some think was a kind of amalgamation of Cochin, Malay, and Dorking.

However this may be, some very fine specimens appear to have reached America in at least two importations, one to Dr. Kerr and another to a Mr. Cornish ; and either from Mr. Cornish’s alone, or from both, the Brahma has undoubtedly been bred, somewhat modified by selection, as with all our other races of fowls

Generally speaking, the really typical Brahma is square rather than lumpy ; otherwise there is a great deal of general resemblance, and the same remarks as to leg-feather and vulture-hocks apply. The size is about the same, but the highest weights recorded have been in Brahmas, several cocks having been weighed which scaled from 17 to 18 Ib.

There are two varieties exhibited, known as Dark and Light. Light Brahmas are mainly white all over the body ; but the cock’s hackle should be sharply striped with black, and the saddle-feathers either less so, or may be nearly or quite white, which is preferred.

THE Malay was the first introduced of the gigantic Asiatic breeds, and in stature exceeds that of any yet known, except the leggy type of Langshan. The cock weighs, or should weigh, from nine to eleven pounds, and when fully grown should stand two feet six inches high. But the general size of this breed has of late deteriorated.

In form and make Malays are as different from Cochins as can well be. They are exceedingly long in the neck and legs, and the carriage is so upright that the back forms a steep incline. The wings are carried high, and project very much at the shoulders. Towards the tail, on the contrary, the body becomes narrow the conformation being thus exactly opposite to that of the Shanghai.

The principal merit of Malays is as table fowls. Skinny as they appear, the breast, wings, and merrythought together carry more meat than those of most other breeds ; and, when under a year old, of very good quality and flavour. They also make good crosses with several breeds.

Mated with the Dorking, they produce splendid fowls for the table, which also lay well ; and with the Spanish or Minorca, though both parents are long-legged, the result is usually a moderately-legged bird of peculiar beauty in the plumage, good for the table, and, if a hen, a good sitter and mother.

They have also been extensively crossed with the English Game fowl, in order to increase the strength, stature, ferocity, and hardness of feather. The great drawback of Malays is their abominably quarrelsome disposition, which becomes worse the more they are confined.

The hens are also inferior as layers to most other breeds ; and on these accounts the pure strain is not adapted to general use, though useful in giving weight and good “wings” to other varieties of fowl.