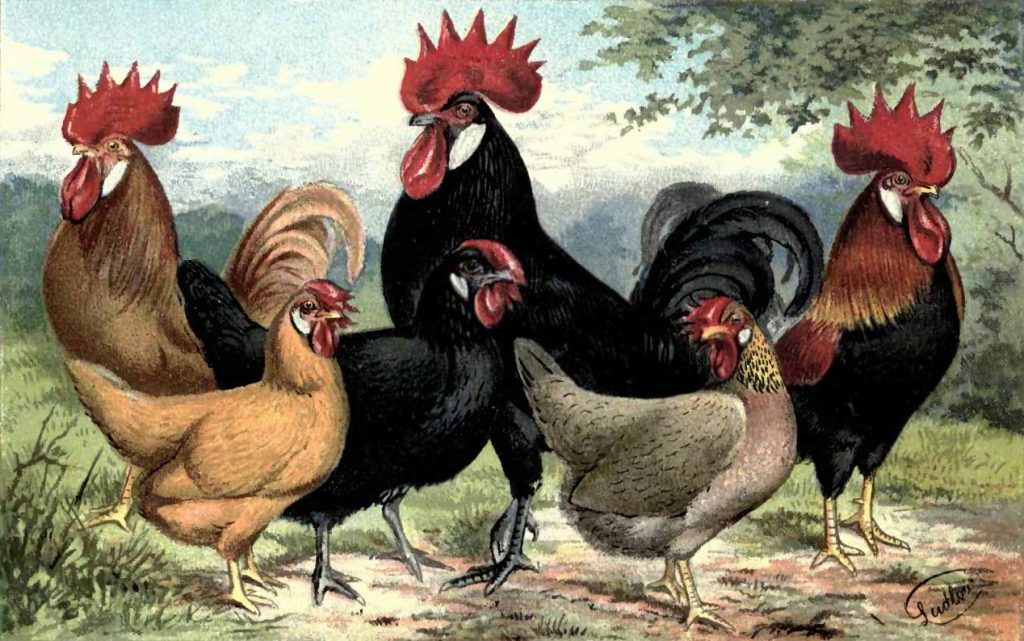 ALL round the coast of the Mediterranean at all events, round the European coast are found fowls of obviously one general type, though differing in minor points. They have high single combs, large wattles and ear-lobes (the latter more or less white), smooth legs, and close plumage; and they are all non-sitters, laying white and comparatively large eggs.

We have often thought that the Roman Catholic religion, with its great number of days on which flesh is forbidden, may probably be answerable in some degree for the development of this type of fowl, and those with similar non-sitting qualities in France. The varieties here described come to us from Spain and Italy.

SPANISH. This breed has been longest bred to a standard, and stands alone in the development of white skin, not only into really immense ear-lobe, but into a white cheek or “face,” meeting under the throat.

For a long time it was the only breed for which classes were provided at all shows, and one of the most popular, being celebrated everywhere for the abundance of its immense white eggs; but it has lately been so closely bred for such an excess of white face, that it has become far less fertile, and so delicate that there are few breeders of it, and very few entries at even large shows, its place amongst useful poultry being now taken by the Minorca and other varieties. It must, however, still be regarded as the head and aristocrat of the family.

MINORCAS. This is now by far the most popular and generally useful of the Mediterranean breeds. It was known for many years in the West of England, and steadily advocated by us, before attracting any attention elsewhere or having any class of its own at exhibitions ; but it began to “move” at last, and is now one of the most generally kept of all fowls.

In 1883, after this movement had begun, two classes at the Costal Palace contained 32 entries; in 1897 six classes contained 166 entries. This is not to be wondered at when we remember that the fowl is hardy, of a colour that can be kept anywhere, a splendid layer, and its eggs probably the largest of all.

LEGHORNS. These fowls also belong to the great Mediterranean race, though the first two varieties known of them came to us from America, where, however, they had been received from Leghorn. These two original varieties were the White and the Brown, the first of which were sent over in 1870 to Mr. Tegetmeier; the Brown in 1872 to us.

Since then one or two other varieties have been imported, and at least three made or bred in England. The breed may be described as generally resembling the Minorca in features, with the same type of comb and wattles, and laying also white eggs large in proportion to its size. But the size is relatively smaller; the legs are yellow instead of dark, the head and face are finer and smoother, with more or less yellow beak, and a creamy rather than white ear-lobe (this being connected with the yellow in beak and legs), and the attitude and carriage are more sprightly, wide-awake, and “dainty” in appearance.

In America the type of Leghorn differs entirely from the English. The birds are smaller and more sprightly, and the tails of the cockerels, as in the original birds sent to England, are still retained upright, or squirrel fashion, which in England is so disliked. In comparison the English bird is more massive, and Minorca in character. The difference arises mainly from the demand in America for “broilers,” whereas the English prefer a good-sized fowl and a large egg.

ANCONAS. This name has been given to different fowls of different origin. From about 1860 to 1880 those so known were cuckoo-coloured fowls, of the same type as the preceding, and with dark legs; their origin being no doubt a cross between black and white. This colour and marking, however, when it once appears, is far more permanent than the blue dun, and generally persists as a whole, though with tendency to black, white, and coloured feathers about tail and hackles, which have to be carefully bred out.

The birds may very likely have come from Ancona, round which all colours and crosses exist amongst fowls of this type ; they were rather small and short-legged, and all the specimens we came across had the reputation of being splendid layers and hardy, as cross-bred birds of laying strains generally are.

About 1883 another variety was introduced, this time undoubtedly from Ancona, where mottled fowls of one kind or another seem to abound. These birds more resembled the Leghorn type, as described, having yellow beaks, and legs also yellow, more or less mottled with black.

The plumage also differs completely, being mottled or splashed black and white, just like the mottling of the Houdan. It is remarkable thus to have received two different fowls from the same locality, composed of the same colours, but which have amalgamated in a different manner.

These latter are the fowls now known as Anconas. The heads and combs are distinctly Leghorn, with white to creamy ear-lobes. The hackles are black edged with white, rest of the plumage as described above.

Attempts have been made to get the creamy ear-lobes discarded for white, and the black spots or mottling on the yellow leg rejected ; but it is much to be hoped these may not succeed, since they must ruin the usefulness of the breed, and the points are in a way typical.

Anconas are very hardy, and splendid layers. The cocks are very ardent and vigorous, and Mrs. Bourlay, one of the principal breeders, states that eggs are most fertile generally when each is mated with about nine hens.

They surpass Leghorns as winter layers, and stand frost and snow well. The chickens grow rapidly, and generally lay at five months. When full-grown they do best fed rather sparingly, as stock ; but if full-fed, or put up a week or two, make plump and delicate, though small, table fowls.

There is, however, one point to be borne in mind. All these splashed Anconas appear to be of a wild and nervous nature, like pheasants ; and the chickens, though hardy as regards exposure, require room and fresh pure ground, as pheasants and turkeys do. When reared in confinement with others they appear to die off from this reason.